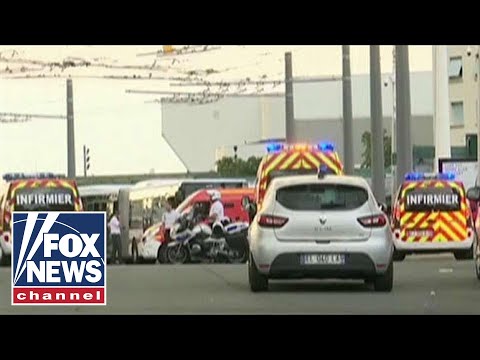 1 dead, at least 9 injured in Lyon knife attack 1 dead, at least 9 injured in Lyon knife attackA knife attack outside of subway station in France leaves at least one dead, nine others injured, one suspect in custody with investigator. Still looking for possible accomplices. Police are now saying this is not being considered a terrorist back at the stage. Katie Logan is live in London with the latest hi Kitty hi, my boy was killed in the attack was just 19 years old, three of them seriously. Now this all happened this afternoon in a suburb to the new suite Northwest of the French city of Leo local time play Stewie Metro station. It’S not yet clear. If the victim who died arrested, he was reportedly carrying that knife. When he was stopped, he has apparently claimed to be an Afghan National. He gave two identities to blister these details, not yet confirmed that he was Adam Sica. It’S believed that he did not have a criminal record. That was initially a Manhunt for a second attack of that was later called off. Please play they have now. The only suspect the most is unclear at this day, but Auntie Tara place are not part of this investigation. Principles have suffered a series of extremist attacks in the past, but there’s no indication of any link is this particular case French police saying there’s no reason to believe that this is a terrorist act, as you say they are investigating to see if this particular individual did Have any accomplices Mike French police are not deeming this a terrorist attack at this time; Kitty Logan reports.