All aboard! Atletico, Real Madrid stars travel to derby on public buses 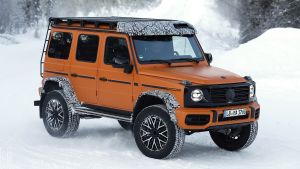 Mercedes will soon launch a replacement for the G-Class 4x4x2, which will make its debut in 2023, shortly after the facelifted standard SUV. The rugged specification first appeared on the previous G-Wagen back in 2015.

Our spy photographers spotted this G-Class 4x4x2 prototype during winter testing – and, as it isn’t covered in overly-heavy camouflage, it means we’re able to get a good look at the car’s styling and off-road upgrades.

The car’s bodyshell is broadly the same as the standard G-Class we spied earlier this year, sporting the same LED headlights and updated front bumper. However, Mercedes has bolted on a load of off-road accessories, such as a new roof rack, a spare wheel carrier for the rear door and a tough metal rear bumper.

Mercedes has made some changes to the car’s chassis, too. Look closely under the 4×4’s front bumper and you’ll see a beefier pair of lower control arms – and, behind the alloy wheels, there’s a set of drilled disc brakes and larger calipers.

This prototype has a much wider track and a taller ride height than the standard G-Class. The increased track width has also meant Mercedes has had to fit wider wheel arches. Peer into the wheel wells and you’ll also see thicker shock absorbers.

The suspension changes made to the previous G-Class 4x4x2 allowed for a ground clearance of 450 millimetres and a fording depth of 1,000 millimetres – and Mercedes will aim for similar specifications with this new model.

This flagship version of the G-Class could be powered by Mercedes’ turbocharged 4.0-litre V8 engine, as hinted by the side-exit exhausts on this prototype. The same unit is found in the recently updated AMG E 63 super saloon, where it produces 604bhp and 850Nm of torque.

However, due to the instability brought on by the added ride height and relatively short wheelbase, Mercedes could electrically reduce the engine’s output. The previous-generation 4x4x2 only had an output of 416bhp – and to reflect this reduction in power, the old model cast off its “AMG” moniker in favour of a G 500 nameplate.

Either way, the engine will be mated to a beefed-up version of the standard G-wagen’s nine-speed automatic gearbox and mechanical four-wheel drive system. Like the production off-roader, buyers will also get three locking differentials and clever anti-roll technology.

Like the standard G-Class, there’ll be some big changes inside for the new 4×4 Squared. It’ll finally get the latest version of Mercedes’ MBUX infotainment software – which is an important update, as the G-Wagen is currently the only model in the German brand’s line-up running on previous-generation tech.

Instead of making the interior like that seen on the new S-Class and EQS with large screens, the focus will be on new software, fresh trim and updated switchgear, with the brand also introducing a touch-sensitive pad in place of the older rotary dial found in the current car.

Prices for the updated Mercedes-Benz 4×4 Squared are unknown at this stage but, considering the standard facelifted G-Wagen is expected to have a starting price of around £105,775, we would expect the 4×4 variant to warrant at least a £100,000 premium – just like the previous model did.