College coaches, leaders share candid thoughts on future of NIL: ‘We all feel like there’s no rules’

TAMPA, Fla. — There was a subtle tip of the cap Sunday — or perhaps it was an adjustment, depending on who you ask — and then Buccaneers quarterback Tom Brady put his head down and walked off into the south end zone corner of Raymond James Stadium, perhaps for the last time in his 22-season NFL career, after falling in the NFC divisional round.

Is this how it ends for the 44-year-old signal-caller who put together perhaps the greatest career in professional sports, 20 of them with coach Bill Belichick to orchestrate the New England Patriots’ dynasty, and the past two elevating the Buccaneers from obscurity to NFL prominence? Was this Brady’s exit, with no wave to the fans, no tearful goodbye, just a man trailing behind his offensive coordinator to whatever’s next?

Eleven months prior, as confetti rained down on Ray James — the first time an NFL team won a Super Bowl at home — and moments after sons Jack and Benjamin and daughter Vivian ran into his arms, wife Gisele Bundchen whispered into his ear, “What more do you have to prove?”

And despite a few pleas from teammates — Shaq Barrett jokingly said last week, “Don’t hang ’em up, Tom. Man, don’t do it” — Bundchen’s right. Brady has literally nothing left to prove as a player, with seven championships — one more than Michael Jordan’s six with the Chicago Bulls — and an encyclopedic number of records to his name.

He owns the NFL’s record for most Super Bowl wins — more than any franchise in NFL history — career wins (243), postseason wins (35), completions (7,263), career passing yards (84,529) and career passing touchdowns (624). His 485 completions this year were an NFL single-season record. His 13,049 career postseason passing yardage is also nearly double the next closest player (Peyton Manning, 7,339).

But is this the way he’ll go out?

Brady said on his “Let’s Go!” podcast Monday, “It’s not always what I want — it’s what we want as a family.” 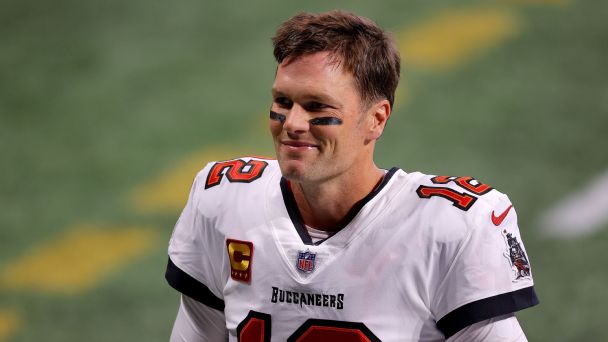 He said he doesn’t need a farewell tour à la Steelers quarterback Ben Roethlisberger, who likely finished his career in the AFC wild-card round. One could argue Brady’s emotional return to Foxborough, Massachusetts, in Week 4 and his Man in the Arena series on ESPN+ — which peeled back the curtain and encapsulated his brilliant career — were his farewell.

Brady said he didn’t need to go out on a win to walk away “proud and satisfied.”

Yes, steely-eyed, Microsoft Surface-throwing, official-berating Brady, who twice didn’t shake hands with quarterback Nick Foles and can barely get through two minutes of postgame availability after a loss, said he would be OK ending his career this way. Think about that.

It shows how little we know about the man, that while football and winning are seemingly everything to him, they aren’t the only thing.

For as heartbreaking of a loss as last week’s divisional game was, Brady delighted in being able to enjoy waffles Monday morning with his children because he wasn’t pulling into the parking lot of the team’s AdventHealth Training Center headquarters before dawn. You could hear it when a sweet little voice joyfully muttered, “Hello,” on the podcast Monday night — from his 9-year-old daughter — that showed that his family was excited to have their daddy back.

As lavishly as these NFL megastars live, they aren’t immune to the challenges other families face often because their time together is compartmentalized into a six-month offseason.

“She deserves what she needs from me as a husband, and my kids deserve what they need from me as a dad,” Brady said of Bundchen, a supermodel and budding philanthropist, whom he acknowledged has turned down professional opportunities over the past decade-plus to care for their family.

Maybe Brady wants to be there to see Jack, 14, who lives with his mother, Bridget Moynihan, in New York, off for his first day of high school. Maybe he wants to go fishing or draw pictures with Benny, who is 12, or spend more time talking unicorns and ponies with Vivi and help foster her dreams of becoming a veterinarian.

Brady revealed to Howard Stern that he wasn’t holding up to his end of the bargain as a husband and that Bundchen threatened to divorce him. The two then entered marital counseling.

Brady said he still keeps a letter she wrote to him in his drawer, holding him to his priorities. He also revealed on his podcast how hard it is for Bundchen to see him take hits — Brady’s bloody lip during the Rams playoff game probably didn’t help.

The reality is, Brady doesn’t need the NFL anymore to define him professionally — he’s got a global health and wellness brand in TB12, a multiplatform production company called 199 Productions and now a Brady clothing brand that hopes to one day rival Jordan’s.

But does the NFL need Brady? If last Sunday’s divisional games showed us anything, it’s that the Cincinnati Bengals‘ Joe Burrow, Kansas City Chiefs‘ Patrick Mahomes and Buffalo Bills‘ Josh Allen are more than ready to carry the torch at quarterback. The Los Angeles Chargers‘ Justin Herbert may get there, too.

None of those players though — with the exception of Mahomes — have had a chance to touch a Lombardi Trophy, or have dealt with anything close to the perpetual limelight Brady has existed in for two decades. None of those players are global icons, and may never be, as you could make the argument that Brady is the NFL’s first and only, in a sport that has aspirations of doing what soccer and the NBA have done in cultivating international fan bases.

But in the NFC, the cupboard would be noticeably bare if both Brady and the Green Bay Packers‘ Aaron Rodgers retire. If we’re looking for veterans, then the Los Angeles Rams‘ Matthew Stafford fits the bill — especially if he leads them to the Super Bowl with a win over the San Francisco 49ers this weekend.

Perhaps the Arizona Cardinals‘ Kyler Murray — part human pinball and part Jedi master — although he and coach Kliff Kingsbury’s performance in the wild-card round were a disappointment. Seattle Seahawks quarterback Russell Wilson last won a Super Bowl in 2013, and the Dallas Cowboys‘ Dak Prescott is 1-3 in four career playoff games.

Those players are also a long way away from shattering any of the records Brady and former Saints quarterback Drew Brees was gunning for over the last couple of years.

“It just doesn’t make sense to me — it’s just next level,” Bucs left guard Ali Marpet said of Brady’s season. “Every week it’s just like they announce some record, and it’s usually his record that [he] broke at the stadium. It’s like, ‘Oh, Tom broke another record.’ It’s just unbelievable.”

There’s no denying things would change dramatically in Tampa Bay, too, just as quickly as they did when Brady came over and the city seemingly overnight became the center of the NFL universe. He’s under contract through 2022 on a two-year deal worth $50 million. If he leaves, the Bucs will recoup $16 million of his signing bonus.

But that creates a problem as the Bucs don’t have a successor in waiting, with Blaine Gabbert, Ryan Griffin and Kyle Trask left on the roster. Trask, whom the Bucs selected in the second round of last year’s draft out of Florida, took a redshirt year and was inactive for every game. He’s nowhere close to being ready; he got few reps last year. Arians said they’d look at free agents if that were the case.

Plus, there’s the domino effect of players like tight end Rob Gronkowski possibly departing too, and offensive coordinator Byron Leftwich could realistically leave for a head coaching job. Defensive coordinator Todd Bowles could leave too.

As a whole, they would have a void without Brady in the NFL. He was the Cinderella story — the sixth-round draft pick turned real-life superhero — even when scandals like Spygate and Deflategate threatened to tarnish his image and career as the wins continued to pile up.

And somehow he emerged from the dark and dreary hallows of Foxborough and Belichick’s shadow into this likable, seemingly normal guy with corny dad jokes who, like the rest of us, showed he wasn’t immune to bouts of forgetfulness (obviously fourth down on national television is a little different than, ‘Honey where are my keys?’) or the effects of day-drinking in the Florida heat.

There once was an NFL without Brady, without Manning and without Brees. But they truly helped usher in a generation of some of the best quarterback play we’ve ever seen, and might ever see, and coupled with a series of rule changes, they helped turn this into today’s QB-driven league. It just so happens Brady is the last one standing, and his goodbye would truly close a chapter on that entire generation.