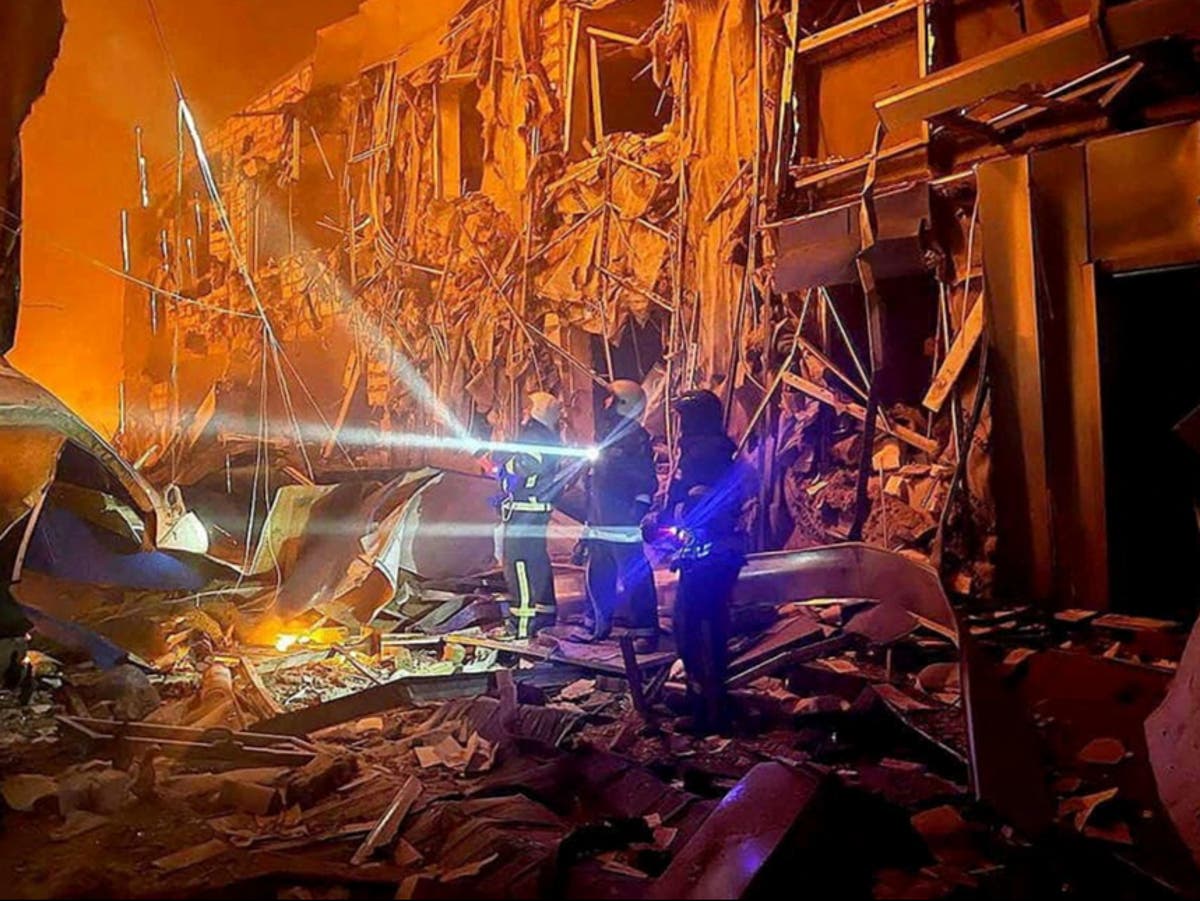 Russia is about two weeks behind schedule in its invasion of Ukraine’s Donbas region and the south of the country, a senior US defence official said on Tuesday.

At the end of April, a US defence official said Russia was only “several days” behind schedule. But on Tuesday an official said: “We would assess that he’s easily two weeks or even maybe more behind … where he thought he wanted to be in the Donbas and in the south”.

On the south coast on Tuesday, Russia fired three hypersonic missiles at Odesa as part of a barrage on the major Black Sea port city, according to the Centre for Defence Strategies, a Ukrainian think tank tracking the war.

One person was killed and five were hurt in the barrage, which hit a shopping centre and a warehouse on Monday. The centre identified the weapons used as Kinzhal, or “Dagger”, hypersonic air-to-surface missiles.

Earlier, Mr Putin was reported to have lost his 40 colonel of the war so far.

Ukraine says it has pushed Russia out of villages near Kharkiv

Ukraine said its forces had recaptured villages from Russian troops north and northeast of Kharkiv, pressing a counteroffensive that could signal a shift in the war’s momentum and jeopardise Russia’s main advance.

Tetiana Apatchenko, press officer for the 92nd Separate Mechanised Brigade, the main Ukrainian force in the area, confirmed that Ukrainian troops had in recent days recaptured the settlements of Cherkaski Tyshky, Ruski Tyshki, Borshchova and Slobozhanske – which run north of one another north of Kharkiv.

Two miles to the left of Ruski Tyshki is Ruska Lozova, which Ukraine claimed to have retaken on 29 April.

Defence ministry adviser Yuriy Saks said the successes were pushing Russian forces out of range of Kharkiv, Ukraine’s second-largest city and located in the northeast, which has been under perpetual bombardment since the war began.

“The military operations of the Ukrainian armed forces around Kharkiv, especially north and northeast of Kharkiv, are sort of a success story,” Mr Saks told Reuters. “The Ukrainian army was able to push these war criminals to a line beyond the reach of their artillery.”

Russia two weeks behind in Donbas, says US official

Russia is about two weeks behind schedule in its invasion of Ukraine’s Donbas region along with the south of the country, a senior US defence official said on Tuesday.

“We would assess that he’s easily two weeks or even maybe more behind … where he thought he wanted to be in the Donbas and in the south,” the official, speaking on the condition of anonymity, told reporters.

Russian forces turned their attention to the Donbas at the end of March after failing to take any major cities in the north of Ukraine.

At the end of April, a US defence official said Russia was “several days” behind schedule.

US says Russian cyber war against Ukraine began in January

The Biden administration on Tuesday formally blamed the Russian government for a series of cyberattacks targeting Ukraine’s government and private sector that occurred in the days leading up to and amid the ongoing invasion (John Bowden writes).

A statement from Secretary of State Antony Blinken accused Moscow of conducting “denial-of-service attacks, and cyber attacks to delete data from computers belonging to government and private entities”.

And according to the secretary, Russia’s actions had “spillover” effects into other countries around Europe.

According to the State Department the attacks began in January, weeks before Russian forces began surging into Ukrainian-held territory on 24 February.

Several hundred animals have been killed in Ukraine since the Russian invasion. The Independent yesterday reported that as many as 260 cats and 100 dogs were killed in attacks on an animal shelter near Kyiv.

Putin’s ‘use of gas energy as a weapon’ is a ‘challenge’ for Cop 26 Pact, John Kerry says

Vladimir Putin’s invasion of Ukraine has presented a “challenge” to the Glasgow Climate Pact agreed at Cop26 it, according to US climate envoy John Kerry (Neil Pooran writes).

Mr Kerry said the Russian president had spurred on Europe to increase its renewable energy by using gas energy supplies as a weapon.

The former US secretary of state spoke to the BBC for a podcast called No Hot Air.

The Glasgow Climate Pact called on countries to phase down unabated coal power and inefficient fuel subsidies as part of action on climate change.

China would prefer to take over neighboring Taiwan without military action but is working to get to a position where its military could prevail even if the United States intervenes, US intelligence chiefs said on Tuesday.

China views Taiwan, a democratically governed island, as its “sacred” territory and has never renounced the possible use of force to ensure eventual unification.

The United States, like most countries, has no formal diplomatic ties with Taiwan but is its most important international supporter and arms supplier, making it a constant source of tension between Beijing and Washington.

“It’s our view that [the Chinese] are working hard to effectively put themselves into a position in which their military is capable of taking Taiwan over our intervention,” Director of National Intelligence Avril Haines told the Senate Armed Services Committee.

Ms Haines and Lieutenant General Scott Berrier, director of the Defense Intelligence Agency, testifying on worldwide threats to US national security, discussed the lessons China may be taking from the war in Ukraine and the international response to it.

Ms Haines said she did not believe the war was likely to accelerate China’s plans on Taiwan. Mr Berrier said using the military to achieve its objective was not Beijing’s top choice.

“I believe the [People’s Republic of China] would rather not do it by force. I think they would rather do this peacefully over time,” Mr Berrier said.

The Raptor-class patrol vessel was targeted by a laser-guided bomb dropped from a Ukraine-operated Bayraktar TB2 drone near Snake Island in the Black Sea on Sunday, the Ukrainian ministry of defence said.

Ukraine has claimed several naval targets over the past week including a Serna-class landing craft and the frigate Admiral Makarov.

Germany’s foreign minister has reopened her country’s embassy in Kyiv that was closed more than two months ago ahead of the Russian invasion.

Annalena Baerbock said the embassy would work with a skeleton staff, headed by ambassador Anka Feldhusen.

Ms Baerbock, the first German cabinet member to visit Ukraine since the start of the war, pledged further support to Kyiv, including when it comes to investigating and prosecuting war crimes.

Speaking after visiting the towns of Bucha and Irpin, where Russian soldiers are believed to have killed numerous civilians, Baerbock said there can “never again be impunity” for the war crimes committed by Russia.

Several countries including Britain, the US and reopened their embassies after closing them in the days before Russia’s invasion for the sake of staff safety.

The UN General Assembly has voted overwhelmingly for the Czech Republic to replace Russia on the world organisation’s leading human rights body after Moscow’s suspension over allegations of horrific rights violations by its soldiers in Ukraine.

The Czech Republic was the only candidate for the seat on the 47-member Human Rights Council. Seats on the Geneva-based panel are divided among regional groups and a replacement for Russia had to come from an eastern European country.

Russia was suspended from the council in April by 93 votes to 24 in an emergency session held after photos emerged from the city of Bucha in Ukraine showing civilians dead in the streets.

In Tuesday’s secret ballot, 180 of the General Assembly’s 193 members deposited ballots. The result was 157 countries in favour of the Czech Republic and 23 abstentions.

Putin preparing for a long war, say US officials

Vladimir Putin appears to be preparing for a long war in Ukraine, top US intelligence officials said.

Russia, which calls the invasion “a special military operation,” poured more troops into Ukraine for a huge offensive last month in the eastern part of the country but its gains have been slow.

US Director of National Intelligence Avril Haines, also appearing before the Armed Services Committee, said: “We assess President Putin is preparing for a prolonged conflict in Ukraine during which he still intends to achieve goals beyond the Donbas.”

She added that Mr Putin was counting on the Western resolve to weaken over time and as the conflict continued, there was concern about how it would develop in the coming months.

“Combined with the reality that Putin faces a mismatch between his ambitions and Russia’s current conventional military capabilities, likely means the next few months could see us moving along a more unpredictable and potentially escalatory trajectory,” she added.