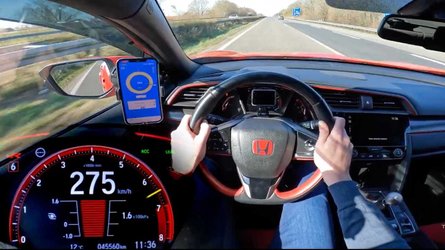 Just a few weeks ago AutoTopNL released a video of a Honda Civic Type R Limited Edition doing a high-speed run on the autobahn. Now, the channel is back with another CTR, and this one has a stage 2 tune.

The driver makes the most from his drive in the tuned Civic. He rows up and down the gears. He also stops on the road several times to do 0-62 miles per hour (100 kilometers) runs. Unfortunately, we can’t get a clear look at the phone to see the car’s acceleration times.

This Civic Type R loves to rev and seems like it would be lots of fun to go through the gears on a curvy road. The car has plenty of performance on the autobahn, too. There’s some traffic while recording this video, so the driver has to make a couple of attempts before pushing the CTR’s speed all the way.

The speedometer eventually shows an indicated 275 kph (171 mph). It looks like there’s about 500 rpm left before the tachometer reaches the redline, so the car might be able to go a little faster with a long enough stretch of road.

The next-generation Civic Type R will have its global premiere at an event in Europe in June. The model will have a North American premiere during the NTT IndyCar Series race at the Mid-Ohio Sports Car Course.

The new Civic Type R reportedly uses a tuned version of the current model’s turbocharged 2.0-liter engine. We’re expecting power to increase slightly. A manual gearbox is the only transmission choice. It already set a lap record for front-wheel-drive vehicles around Suzuka.