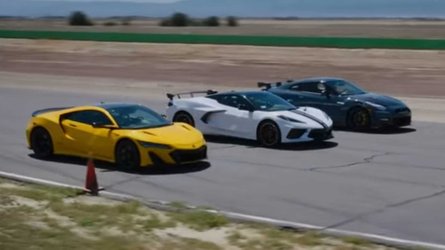 There’s no shortage of sports cars on the market today, but they are far from all equal. The latest Throttle House YouTube video demonstrates that by gathering four such models and racing them. The four competitors are the Chevy Corvette Stingray, Nissan GT-R Nismo Special Edition, Acura NSX Type S, and the Porsche 911 Turbo S.

That’s a formidable lineup, but Throttle House breaks up the quartet into two distinct heats. The first sees the Corvette, GT-R, and NSX battle it out before that winner lines up against the Turbo S.

The GT-R trounces both the Corvette and the NSX in the first-heat races. That puts the GT-R up against the Turbo S, which is more potent than the GT-R. The Porsche also lost its rear seats to help reduce its weight, giving it a bigger advantage, which it uses. The Turbo S walks away from the GT-R in the standing-start and rolling races. The GT-R is a quick car, but the Turbo S is quicker.

The drag race revealed the quartet’s performance differences, but there is also a huge price discrepancy between them. The Corvette might have been the slowest, but it was also the cheapest, and we know hotter versions are coming, like the 670-hp (500-kW) Z06 that should put some fear into its pricey competitors.