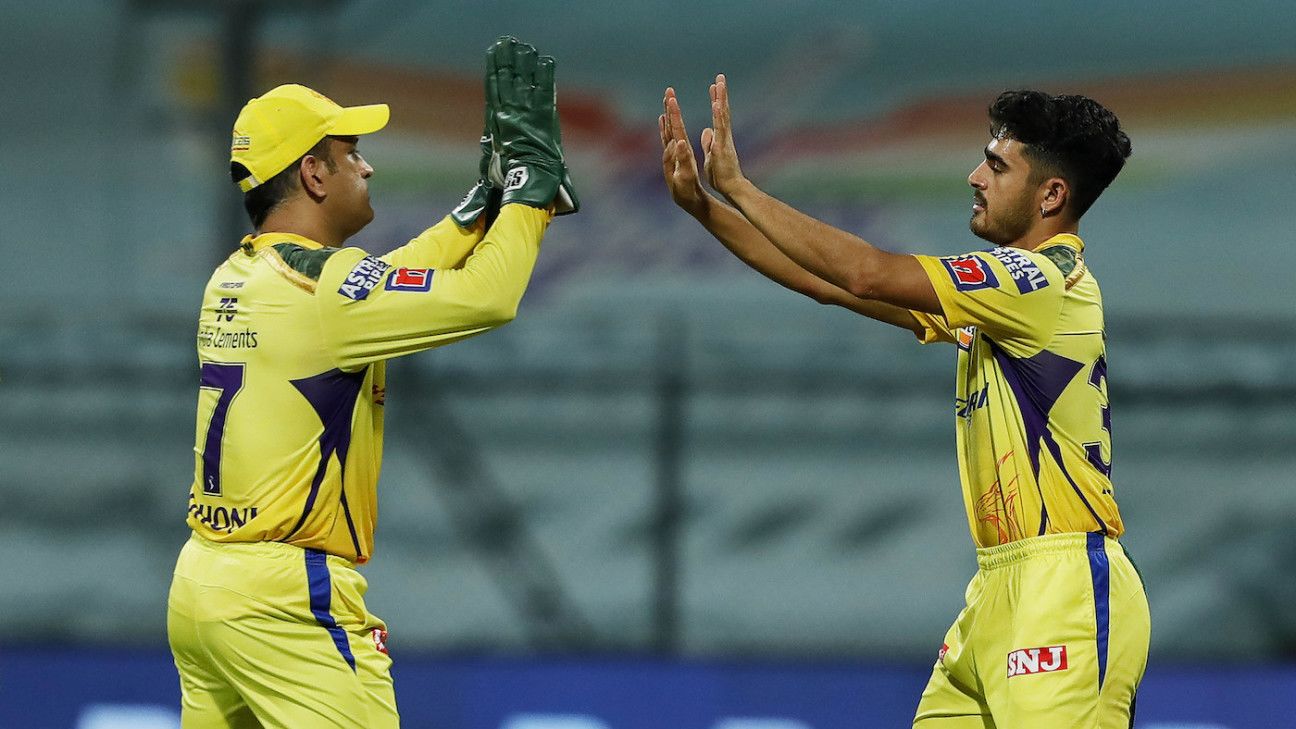 Coming into Thursday night’s game against Mumbai Indians, Chennai Super Kings, in all their seasons of the IPL, had never been bowled out for below 100 while batting first. All good runs have to come to an end, however, and Super Kings crumbled to 97 all out in conditions at the Wankhede Stadium where the ball swung right through the first 10 overs of their innings.
Super Kings lost the match, as expected, with 31 balls remaining, but they still had positives to take out of it, with their new-ball combination of Mukesh Choudhary and Simarjeet Singh bowling their eight overs in one go and reducing Mumbai to 33 for 4 at one stage.

Choudhary picked up 3 for 23, all his wickets the product of the left-armer’s traditional mode of inswing to the right-hander and outswing to the left-hander. Simarjeet finished with 1 for 22, finding Rohit Sharma’s outside edge with a good-length ball that left him late.

MS Dhoni, the Super Kings captain, was full of praise for his new-ball pairing during his post-match interview with Star Sports.

“Irrespective of how the wicket is, anything below 130 is very difficult to defend, but still, what I asked the bowlers was to show a lot of character, put the opposition under pressure, forget about the result, and I feel both the youngsters, both the fast bowlers, they bowled really well,” he said. “So as far as their contribution is concerned, I feel a game like this really helps them. They start believing in themselves by saying, okay, irrespective of the conditions, whenever we start, we need to have the same kind of attitude, and that’s what is needed in the shortest format.”

See also  Ian Bishop: Kieron Pollard isn't done, he can reinvent himself
Super Kings’ hopes for IPL 2022 were dealt a major blow even before the season began, with Deepak Chahar – whom they spent INR 14 crore (USD 1.84 million approx) to reacquire at the auction – picking up a back injury that eventually ruled him out of the competition. The prospect of calling on all three of Chahar, Choudhary and Simarjeet next season is one that enthuses Super Kings coach Stephen Fleming.

“I thought the new-ball bowling of Simarjeet and Mukesh was outstanding,” he said at his post-match press conference. “They’ve been developing – Mukesh all the way through the season, so for him to now feel confident enough to bowl a spell like that, and Simarjeet’s only three games in, four games in, so they’ve made real gains, so that’s a positive. So with Deepak Chahar to come back into the side, there’s some good options with the new ball.”

Fleming was heartened that Choudhary and Simarjeet had delivered their new-ball performances in a difficult situation for Super Kings.

“Yeah, I thought it was really impressive,” he said. “We could have folded, but they really gave us an opportunity, and both of them bowled well. Mukesh in particular had the ball really swinging well, and Simarjeet’s got some deceptive pace.

“So we’re really positive about that pairing going forward. It was just disappointing that we didn’t have more runs to play with, but out of that, out of the ashes, came those two. So it was a good way to look at it.”

Choudhary and Simarjeet are among a line of young Indian fast bowlers who have impressed during this IPL season; Umran Malik, Mohsin Khan, Yash Dayal, Kuldeep Sen and Arshdeep Singh are five other uncapped seamers who have caught the eye.

“It’s good to have them,” Dhoni said. “We have gone through periods when we never had real extraordinary bench strength of fast bowlers, and also what happens is, with fast bowlers, they take their time to mature. If you are lucky you get somebody who in six months’ time can feature in all the different formats, whether it’s Test cricket, one-day or T20, and I feel that’s what IPL is doing.

“It’s an opportunity for them, and a lot of them, they have become slightly more bold, a bit more courageous which I feel is important in a format like this. They want to take the opposition head-on, and that has been the difference. Yet, you see a few who are not those types, who shy away a bit initially, but as they play more games, they get more and more confident and they are able to execute their plans better.”

IPL 2022: RR vs DC, Match 58: Pitch Report, Probable XI and Match Prediction
See also  Dillon Brooks on the Gary Payton II injury: 'If I could take it back, I would'