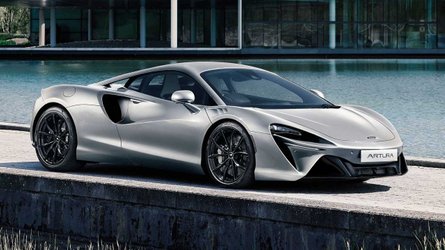 On February 6, 1952, King George VI died and his daughter Elizabeth ascended the throne as Queen of the United Kingdom. 70 years have passed since then, making 2022 the Queen’s Platinum Jubilee. To honor the occasion, UK-based Mclaren Automotive turned to its bespoke MSO division for a one-off Artura with some special touches.

For starters, this Artura doesn’t wear a McLaren badge on its nose. In its place is an Elizabeth II badge that required special tooling to make. It follows the style of McLaren’s standard badge, and it’s color-keyed to a special exterior shade of silver appropriately named Platinum Jubilee. MSO analyzed the pigment under numerous lighting conditions to get the color just right, then spent eight days formulating and testing it for durability.

McLaren doesn’t mention what will become of the special Artura bearing the Queen’s name. But Platinum Jubilee will be a new color offered on future models. It’s unclear if it will be part of McLaren’s standard color palette, reserved for special models, or something available through MSO.

Queen Elizabeth II’s specific 70th anniversary was on February 6, but McLaren chose to announce the special Artura on May 12 for another reason. The company’s global headquarters in Woking opened on this day back in 2004, and the Queen was there to open the doors.

“It has been an honor for MSO to create a new platinum paint in celebration of Her Majesty’s Platinum Jubilee this year,” said MSO Managing Director Ansar Ali. “This special paint, which will be available for customers to select for years to come, will be a fitting tribute to mark this historic milestone.”

The Artura is McLaren’s first series-production hybrid supercar, featuring a twin-turbocharged 3.0-liter V6 paired with a single electric motor. The combined output is 671 horsepower (500 kilowatts), which goes to the rear wheels through an eight-speed dual-clutch transmission. With the accelerator floored, it can reach 60 mph in 3.0 seconds. Or for more efficient travel, the Artura offers an electric-only range of 19 miles.

At age 96, Queen Elizabeth II holds the distinction of being the oldest and longest-reigning British monarch.