2022 NFL schedule: Analysis and a bold prediction for all 32 teams

The 2022 NFL schedule was released on Thursday.

Can quarterback Matthew Stafford and the Los Angeles Rams repeat as champs?

Stafford and the Rams will kick off the NFL season Thursday, Sept. 8, by hosting the Buffalo Bills. ESPN’s Monday Night Football opener is Sept. 12 and will feature Russell Wilson‘s debut with the Denver Broncos hosting his former team, the Seattle Seahawks.

The 2022 schedule is out and Vivid Seats is here to help fans find tickets in their price range. Start making plans for that perfect road trip!

Disclaimer: Vivid Seats is ESPN’s ticketing partner and ESPN gets a commission on any sales driven through this link.

Based on strength of schedule — which is determined by opponents’ records in 2021 — the Rams have the toughest schedule of the 2022 season and the Dallas Cowboys and Washington Commanders tie for the easiest.

Here’s a bold prediction for every team following the schedule release. Click on the links to see the full schedule and more analysis.

The Patriots will need to beat the Bills in the regular-season finale to secure a playoff berth, and it will be intriguing to see how it unfolds if Buffalo has already solidified its own playoff seeding. The Patriots’ 2021 season ended in embarrassing fashion at Buffalo in a 47-17 playoff loss, and in this scenario, they would have a chance to write a different story a year later. Read more from Mike Reiss

The Ravens win the AFC North to become the NFL’s latest team to go from last place to first. This has happened in 17 of the last 19 seasons, and the Ravens are in a great position to continue this trend. Baltimore gets back six starters who suffered season-ending injuries last year, along with a healthy and motivated Lamar Jackson, who is entering his fifth-year option. That’s a major boost to a Ravens team that lost five games by three points or fewer last season, including a one-point defeat to the eventual Super Bowl champion Rams. Read more from Jamison Hensley

It’s difficult to forecast Cleveland’s season without knowing whether quarterback Deshaun Watson will be suspended. But if he isn’t, the Browns win their first division title since 1989. Read more from Jake Trotter

The Texans will enter their Week 6 bye at 2-3. Houston has three of those five games on the road but could win at the Chicago Bears and the Jacksonville Jaguars. Read more from Sarah Barshop

The Colts will get their first victory over New England coach Bill Belichick at Gillette Stadium for the first time since 2006 in Week 9. The Colts have lost six straight to the Patriots at their home stadium by an average of 19.6 points a game in that span. Read more from Mike Wells

The Jaguars, who have won four games the past two seasons combined, will end two long losing streaks by beating Washington on the road in the season opener. They’ve lost 17 consecutive road games dating back to a victory in Oakland on Dec. 15, 2019, and 16 consecutive games against NFC teams dating back to beating the Giants in the 2018 season opener. Read more from Michael DiRocco 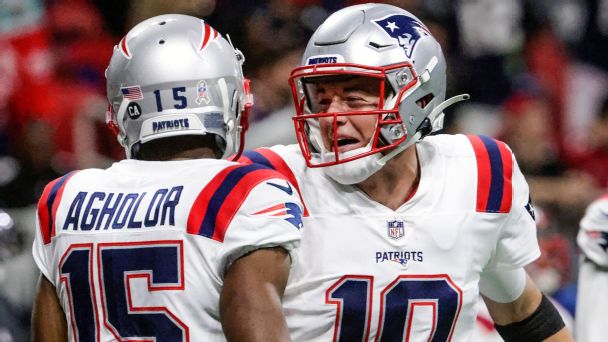 The Giants will win twice as many games after the bye as before their break in Week 9. So that’s two wins in their first eight games and four in their final nine. It’s a byproduct of the tough early schedule, the easier post-bye matchups (beginning with home contests against the Houston Texans and Detroit Lions) and the time it takes to get acclimated to a new coaching staff. Read more from Jordan Raanan

Falcons coach Arthur Smith will once again show he can get the most out of a roster, but the Falcons will struggle against this schedule. Rookie Desmond Ridder will start multiple games this season with Atlanta finishing with a top-5 pick in the 2023 NFL draft.. Read more from Michael Rothstein

Look: 76ers jumbotron is already having Eagles move on from DeVonta Smith

Vikings rookie Lewis Cine on being passed up by Bucs: ‘They did me dirty’

Look: 76ers jumbotron is already having Eagles move on from DeVonta Smith

Vikings rookie Lewis Cine on being passed up by Bucs: ‘They did me dirty’