Without any doubt, it is quite clear that Ambanis have one of the largest collection of cars in the country. They have a variety of luxury and sports car in their garage and we have seen a glimpse of the same in various videos and pictures on social media. Ambani and family are quite special and they move around with z+ category security. The cars used by the security personnel have also been a talking point in some of our articles in the past. This time around Ambani family was spotted on the road in their Rolls Royce Phantom VIII, Bentley Mulsanne and a Bentley Continental.

The video has been shared by CS 12 VLOGS on their YouTube channel. In this video, vlogger spots several super cars and sports cars on Mumbai roads. It looks like the vlogger was spotting the car on a weekend as the number of vehicles on the road were also very less. After some time, the convoy of the Ambani family is spotted on the road. There is a Bentley Mulsanne, Rolls Royce Phantom and a Bentley Continental Flying Spur is spotted on the road . The convoy is maintaining a speed and there are escort vehicles with them. There is an MG Gloster with beacon and strobe lights can be seen in the front.

It looks like the convoy also has a Mercedes-Benz GL Class, A Range Rover and a Mahindra Scorpio used by security personnel. The Bentley Mulsanne is not the regular version but the Hallmark edition. It is special because only 50 units of these were made in the world. This is the customised series available with both speed and the extended wheelbase version. The one seen here in the video is the extended wheelbase version. Each car in this series was handcrafted and it came with a hand painted line running in the full length of the car. This line was either finished in gold or silver. 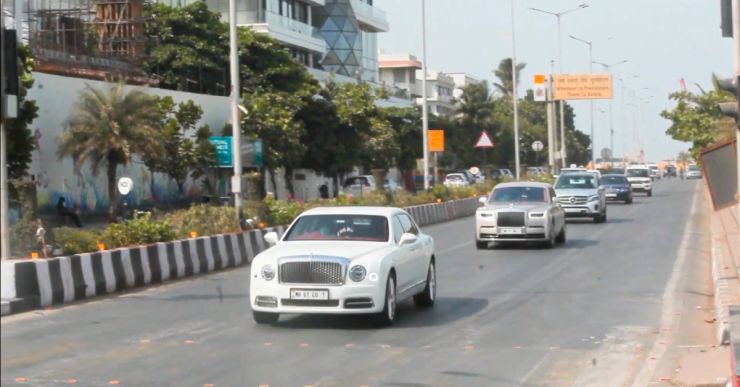 Just like the exterior, interior of the Hallmark edition also shouts exclusivity. There are Silver and Gold lines inside the cabin along with other premium features. It is powered by a 6.7 litre twin-turbo V8 petrol engine. The Bentley Mulsanne generates 505 Bhp and 1020 Nm of peak torque. The Bentley Mulsanne Hallmark version would easily cost over 5 crore, ex-showroom.

Next car in the video is the Rolls Royce Phantom VIII Extended Wheelbase version. This is currently the most expensive car known in Mukesh Ambani’s garage. The car was bought last year during the wedding of Akash Ambani. This is the eight generation Phantom Series luxury sedan. It is one of the most expensive production car in world. The car comes with all the features that one would expect from a Rolls Royce. The sound insulation material inside the car alone weighs around 130 kilogram. Rolls Royce Phantom VIII is a quick car too. It  can do a 0-100 kmph sprint in 5.4 seconds. It is powered by a 6.75-litre twin-turbocharged V12 engine that generates a maximum power of 563 Bhp and peak torque of 900 Nm. It costs over Rs 13.5 crore.

Mercedes CEO Suggests They May Drop Some Entry-Level Models

New DeLorean Debut Moved Up, Now Set For May 31

Mercedes CEO Suggests They May Drop Some Entry-Level Models

New DeLorean Debut Moved Up, Now Set For May 31