Bettors like Lakers’ title odds despite no big deals

At Comedy Shows in Lviv, Crowds Look for Humor Amid a Deadly War 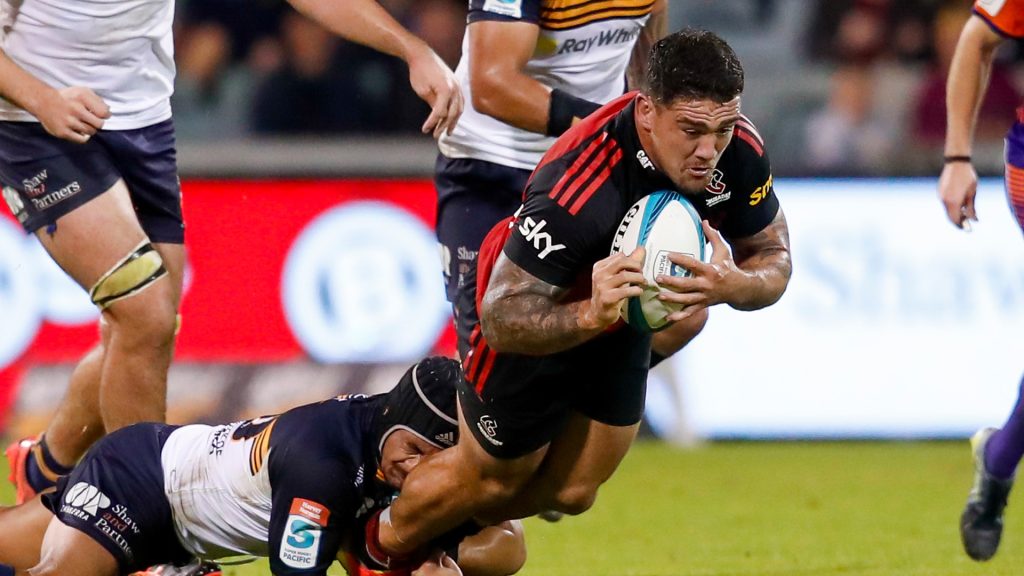 The Crusaders travelled to Canberra to take on the Brumbies on Friday evening knowing that a win could see them jump into second place on the overall Super Rugby Pacific ladder.

The Brumbies were first out of the blocks thanks to the efforts of Irae Simone but the visitors quickly wrestled back control of the match and dominated the game for the bulk of the 80 minutes – although a fightback late in the piece certainly made for an exciting final 15 minutes.

Come the end of the match, the Crusaders emerged victorious with a 36-27 win – but who were the best individual performers on the night?

1. George Bower – 6.5
One part of a an incredibly dominant scrum. Had no issues managing Allan Alaalatoa – the man who could well once again be wearing the No 3 jersey for the Wallabies this year. Made one nice carry and was excellent at planting the ball for his supporting forwards and halfback. Off in 57th minute.

2. Codie Taylor – 7
Looks to be coming into form at the right time of the season. Generally very tidy at lineout time – except for one comically abysmal delivery shortly before halftime. Put through an impeccable grubber kick which popped up perfectly for Sevu Reece to grab the Crusaders’ second try. Was the second-top tackler when he departed the match at halftime.

3. Fletcher Newell – 7
Kept to his knitting. Monstered James Slipper at the first scrum and generally had ascendency over his Wallaby opposition, even if it didn’t always result in many gains. Once or twice found himself in the way of his fleet-footed backs but that’s sometimes the case for props. Off in 63rd minute.

4. Scott Barrett – 6
Trucked the ball up regularly and was happy to have a go at the opposition breakdown. Charged down a Rodney Iona clearing kick which handed the Crusaders possession deep inside the Brumbies 22 and led to Taylor’s opening try. Grabbed all his lineouts. Copped a penalty for bringing down a maul.

5. Sam Whitelock – 4
A very quiet match from the All Black. Wasn’t hugely industrious on defence and slipped off a couple of tackles to boot. Also didn’t feature at all at the lineout. After carrying such a heavy workload with so many other locks injured (or suspended), you have to wonder if the big man needs a big rest.

6. Pablo Matera – 7.5
Has slowly come into his own for the Crusaders throughout the season, effective on both sides of the ball. Made one great carry early in the piece to set up a solid platform for the Crusaders inside their 22, and then replicated those efforts late in the game to create prime attacking ball. Beat six defenders. A regular target at the lineout. Pinged once at the breakdown and once for bringing down a maul.

7. Ethan Blackadder – 8
Displayed an incredible engine, making hit after hit late into the game. Finished the match with a game-high 25 tackles – more than twice as many as the next most-industrious Crusader. When he wasn’t hitting attacking players, he was hitting breakdowns. Pinged once for going off his feet while trying to initiate a steal at the breakdown.

8. Cullen Grace – 6.5
A more than willing carrier of the ball. Put in some punishing hits on defence in the first half and was a regular lineout target throughout the first 40.  Off in 70th minute.

9. Bryn Hall – 7
Delivered sharp ball to his teammates thanks to the dominance the Crusaders forwards had over their opposition. Nabbed one very well-taken try with a short-distance dart. Off in 66th minute.

10. Richie Mo’unga – 8
Controlled proceedings well. Didn’t overplay his hand but wasn’t afraid to take on the line. Nailed all seven of his attempts on goal and became just the seventh player to eclipse 1,000 points at Super Rugby level with his second penalty of the night. Missed touch with one penalty and couldn’t quite wrangle Tom Wright when the Brumbies winger dashed away for a score.

11. George Bridge – 5
Struggled to get involved and wasn’t tested under the high ball as many might have expected. Penalised once at the breakdown. Off in 50th minute.

12. David Havili – 6
Stripped while trying to carry the ball out of the Crusaders 22 early in the match, which handed the Brumbies a great attacking platform. Irae Simone touched down moments later. Managed one strip of his own when the Brumbies were on the attack towards halftime. One lovely offload out of the tackle close to the tryline in the 65th minute handed Will Jordan his try. Copped a penalty for a marginally high tackle.

13. Jack Goodhue – 4
Especially quiet in the first half but started to become more prominent on attack in the second 40, carting the ball up in the midfield. Was brushed aside by Simone on the way to his second try and was then penalised for infringing at the breakdown shortly after. Braydon Ennor remains the better option at present. Off in 62st minute.

14. Sevu Reece – 6.5
Caught in no man’s land on defence for the Brumbies’ first try but was in the perfect position to score the Crusaders’ second try with a good chase. Generally chased with interest throughout the match, keeping the Brumbies under pressure at all times. Looked dangerous without every being able to cause too much chaos for the opposition.

15. Will Jordan – 7
Had a couple of yips very early in the match but came alive in the seventh minute with a break that eventually led to the Crusaders’ first score and grabbed one of his own late in the game off a Havili offload. Threw the pass in the 72nd minute that Wright nabbed out of the air en route to the try line. The biggest metre-eater for the Crusaders and similarly to Reece, looked threatening without ever regularly punishing the Brumbies.

16. Ricky Jackson – 6
On at halftime. Continued Taylor’s strong form at the lineout and was generally tidy around the park.

17. Finlay Brewis – 5
On in 57th minute. Kept up the standards at scrumtime. Scorched by Tom Banks in a midfield linebreak in the 75th minute.

18. Tamaiti Williams – 6.5
On in 63rd minute. Quickly got involved with his carrying game.

20. Tom Christie – N/A
On in 70th minute. Managed seven tackles in his 10 minutes on the field and was always sniffing for a turnover.

22. Braydon Ennor – 5
On in 61st minute. Misread the defensive situation at one stage, giving Simone an easy break in the midfield in the final minutes of the game. Wasn’t able to get his hands on the ball.

23. Leicester Fainga’anuku – 6
On in 50th minute. Unsurprisingly ran with vigour upon his introduction to the match and was safe under the high ball too in his one opportunity. Made an impression in the breakdowns, nabbing two steals late in the piece.