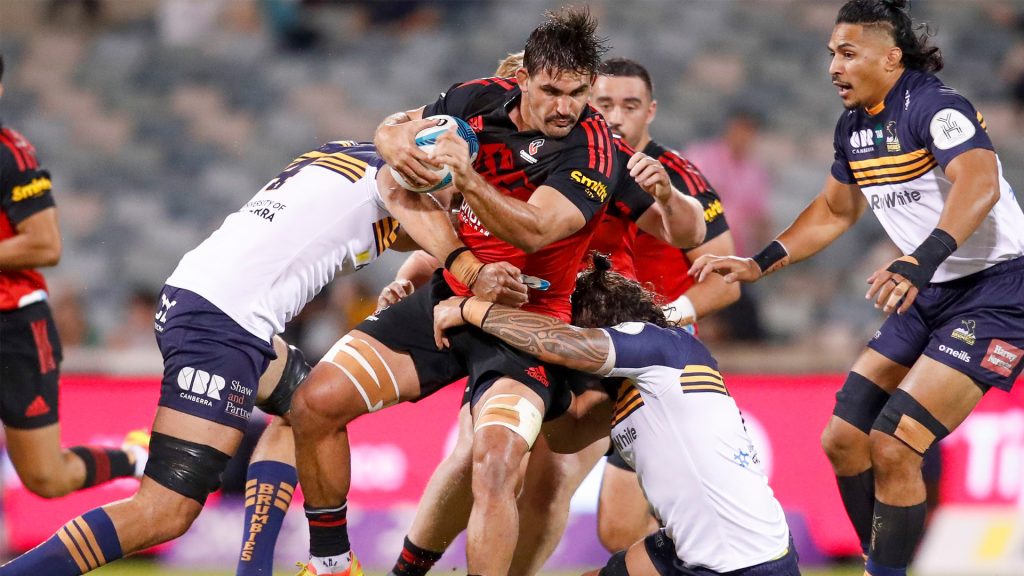 The Crusaders have prevailed in the Super Rugby Pacific’s biggest heavyweight battle of the season so far, but it didn’t come easily against the Brumbies in a GIO Stadium thriller.

While the Crusaders cruised to a 23-5 halftime lead in sublime fashion, the Brumbies showed their championship credentials with a powerful second-half fightback to fall just 11 points short as the visitors triumphed 37-26 on Friday night.

The win lifted the Crusaders into second on the ladder, leapfrogging the Brumbies who suffered only their second loss of the season.

Just as things looked to be falling apart for the hosts, a bullet pass from scrumhalf Nic White hit Irae Simone and allowed the centre to power over for his second try, although the Crusaders hit back soon after as halfback Bryn Hall crossed from a pick-and-drive for 30-12.

The Brumbies just wouldn’t die, with substitute hooker Folau Fainga’a diving over from close range for 30-19, but the back-and-forth scoring continued as Crusaders fullback Will Jordan benefited from his side’s elite recycling to score in the corner for 37-19.

And again as they looked to be running out of life, the Brumbies struck as winger Tom Wright picked off a Jordan pass and ran more than half the field to cut the margin back to 11 points.

The hosts surged again with a Tom Banks line break and banged on the door through the closing five minutes, but couldn’t eat into the Crusaders’ advantage.

The loss ends the Brumbies’ perfect start to the competition against the New Zealand teams, now 3-1 in that portion of their season, while they also drop to third on the table with two games left before playoffs.

They’d landed the first blow inside four minutes, a spinning Simone grounding the ball after an early penalty, but the Crusaders punched straight back with tries for hooker Codie Taylor and winger Sevu Reece, with three Richie Mo’unga penalties completing a 23-5 halftime lead.

Two-thirds of the first half was spent in Brumbies territory and they were possibly lucky to only trail by 18 points at the break, but they certainly matched their powerhouse opponents in the second term.

As professional as it gets through the season’s first 11 games, the Brumbies would be ruing uncharacteristic errors like Simone knocking on a kick return under no pressure and a lineout throw going over Tom Hooper’s head.

The Kiwis largely managed to nullify the Brumbies’ powerful maul that has carved up most packs in the competition.

The Brumbies will face another stern test next Saturday when the table-topping Blues head to Canberra.

IPL 2022 [WATCH]: Virat Kohli bows down to Dinesh Karthik after his dazzling knock against SRH

IPL 2022 [WATCH]: Virat Kohli bows down to Dinesh Karthik after his dazzling knock against SRH