Barbora Krejcikova out of Strasbourg but two former world No. 1s accept wildcard 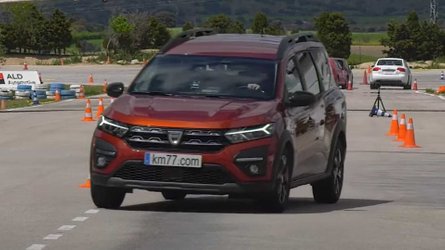 The Dacia Jogger made its official debut in September last year during the 2021 IAA in Munich. It is currently the most affordable seven-seat new car on the European market, offering a nice combination between a wagon, a crossover, and a van. It is obviously not the most dynamic offering but can it at least cover the basic requirements for a modern vehicle when it comes to road behavior?

The channel km77 on YouTube has recently tested the seven-seat wagon from Romania giving it a spin around the cones in what is now known as the moose test. The test is performed to determine how well a certain vehicle evades a suddenly appearing obstacle and is considered passed successfully when the car passes the route without hitting any cones with a speed of 48 miles per hour (77 kilometers per hour).

The Jogger, however, doesn’t get even close to this speed. The best attempt is at 43 mph (70 kph), which is significantly below what other modern vehicles achieve. Even at that speed, the test pilot notes the vehicle understeers heavily and barely manages to fit the final section with cones.

The second part of the video shows the seven-seater doing a slalom around the cones and the time it registers is 26.6 seconds, which is almost on par with the Skoda Fabia 1.0. In this case, the car remains relatively stable but its underpowered 1.0-liter three-cylinder engine doesn’t provide enough oomph to accelerate the large vehicle.

The Jogger is currently the largest model in Dacia’s range at 4,55 meters (179 inches) long. With five seats in use, the cargo volume is 708 liters (25 cubic feet) and if you fold down the second row of seats, the cargo area extends to 1,819 liters (64.23 cu ft). For the time being, you can only have the Jogger with two three-cylinder engines, though a four-cylinder hybrid powertrain with an automatic transmission will join the range next year.