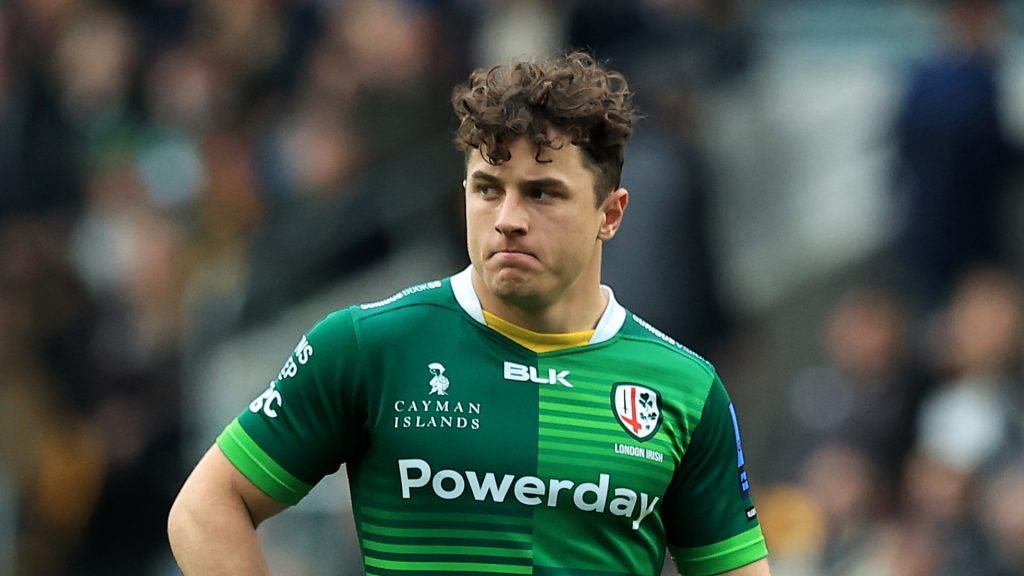 London Irish boss Declan Kidney has insisted that Henry Arundell, who is on the England summer tour radar following last week’s training ground visit by Eddie Jones, won’t be in the shop window anytime soon. The 19-year-old’s burgeoning talent to create a try out of nothing went viral around the world last Sunday following his remarkable solo effort from near his own goalline in Toulon.

That score alerted rival clubs as to the potent attacking threat he has to offer, but Arundell won’t be following Phil Cokanasiga out the door at London Irish. Kidney has frequently spoken about his desire for young English talent to be able to progress to Test level at the Exiles rather than having to move to a different Premiership club to enhance their international selection prospects.

That was what happened in the past with the likes of Anthony Watson, Jonathan Joseph and Joe Cokanasiga after they came through the academy at London Irish, and Cokanasiga’s 20-year-old brother Phil decided on Thursday that his lofty ambitions in the game would be best served at Leicester where he name was included in a list of 16 contract deals confirmed by Steve Borthwick.

However, Kidney is confident that Arundell won’t be seduced by prying eyes and will continue to learn his craft at London Irish. “We have never divulged contract situations of different players but he is here with us,” said the director of rugby on Friday when asked about the youngster’s future in the coming seasons.

He also divulged that England boss Jones had visited the club before their Challenge Cup trip to Toulon to run his eye over a number of young prospects at the Irish. The fast-emerging Arundell, the England U20 who is also apparently eligible for Scotland and Wales, was one of the players they spoke about.

“Eddie was over with the club last week and we went through a number of the players that we had and that is the comment that I am making, the fact that we had the English coach coming to London Irish to discuss a number of our players is a good thing for the club. Henry was one of them and we gave him out insights to that but Eddie is a strong enough person to make up his own mind as to what is the best for Henry’s development.”

While it remains to be seen whether Arundell will be a bolter in the England squad selection for their upcoming tour to Australia, what is certain – according to Kidney – is that the sudden limelight that has now descended on the youngster, who has so far only played a dozen first-team games for London Irish, hasn’t affected him this week.

“Around any rugby environment you are going to get a bit of slagging but what has impressed me so much about Henry is it wasn’t so much about the try but how he has conducted himself in and around that,” explained Kidney ahead of the club’s next fixture, Tuesday’s Premiership Cup final at home to Worcester.

“Henry was out of the game for about a year with serious injury and he worked hard to get back in from that. Sometimes when you see that little bit of adversity when you are younger it helps to put everything into perspective as well.

“I’m delighted for him. You could sort of see it (happening at Toulon). He was in fresh and with 15, 20 minutes to go there was a bit of space there and he took full use of it. It was an exceptional try, there is no doubt about that, but you don’t even have to talk to Henry about calming him down, he just gets on with the next play. That is what impresses me, how he deals with everything impresses me as much as what he did on the pitch.

“I’m not going to try and hold the lad back. He knows that he had good, impressive cameos in the last two weeks against Toulon and Wasps but he also knows the parts to his game that he needs to work on as well then too. We all know when players come on the scene first they can get a little more latitude when they are not known but now he will be spotted. People will keep a closer eye on him and space will be tighter for him. That will present fresh challenges.

“He knows he is learning his trade and sometimes when you do that as a back you draw a lot of attention to yourself but my hope for the young man is just for him to have the space to grow and develop as a player. As long as he keeps enjoying it that will be the main thing. He will grow from here because he has that propensity.

“Like, in dealing with him, that is the thing that encouraged me most, he knows how much he has to work on and when you score a try like that you can let that attention all of a sudden take you away but in fairness, he was working hard in training yesterday [Thursday], today [Fruday] so that is a credit to him.”

A scorer of seven tries in his dozen London Irish appearances, all five of the starts that Arundell has had have been at full-back, the position Kidney feels the teenager, who turns 20 in November, is best suited to. “Full back is his primary position. Could he play on the wing? Absolutely.

“Most good full-backs can adapt onto the wing if needs be. There is quite a difference between them… but I have no doubt that he could adapt. Henry is a good footballer and good footballers can go into quite a number of positions but if you asked when I feel his best position is or where he is more comfortable at the moment, it is full-back.”