The development works on the all-new Toyota Innova Crysta has already started, with the test mule of the MPV spied in South East Asian countries and even in India. Just like how the Innova Crysta debuted with a completely revolutionary design over its predecessor, the next-generation version of the same is also expected to follow that suit. Here, we have got our hands on a design rendering, which gives a hint of what the next-generation Innova Crysta will look like.

A YouTube video shared by SRK Designs shows what the next-generation Innova Crysta might look like. The overall silhouette of the design looks like that of the test mule spied recently a couple of times. This new design makes the Innova Crysta look longer and sleeker than the current version of the MPV. 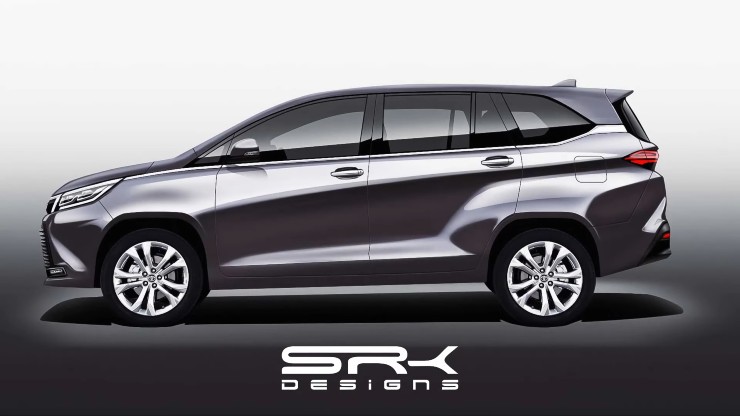 Starting from the front, the design rendering shows that the Innova Crysta gets sleeker headlamps, which are now more angularly positioned than before. These headlamps look as if they come with LED lights and L-shaped daytime running LEDs. What is also visible in the design rendering is that the front air dam on the bumper looks large and has slim-looking LED fog lamps on the bottom corners of the front bumper.

This design rendering of the Toyota Innova Crysta has a sleek looking chrome garnish which starts from the edge of the headlamp and goes all the way to the corners of the rear windscreen, through the window waistline. On the D-pillar, this chrome garnish becomes a bit thicker, to give the MPV the effect of having a floating roofline. The rear quarter glass has a triangular design towards the rear.

The door panels look smoother and unlike the doors of the current model on sale, have got a smooth looking curve on them, which emerge from the front fender and extend till the edge of the tail lamp. Below the squared wheel arches, there are 10-spoke grey alloy wheels.

Towards the rear, this design rendering of the Toyota Innova Crysta has a broad rear fender, which accommodates a squared fuel filler cap. The side panels of the rear windscreen are finished in gloss black, while the rear windscreen here gets a roof-mounted rear spoiler. The tail lamps here seem like all-LED units, which have pointier extensions towards the rear fenders. The rear bumper seems to have a sporty look with reflectors mounted on the corners.

The new Toyota Innova Crysta will take some time to come here, and might launch here anytime in the first half of 2023. Like the current model, it will continue to offer petrol and diesel engine options with both 6-speed manual and automatic transmission choices.