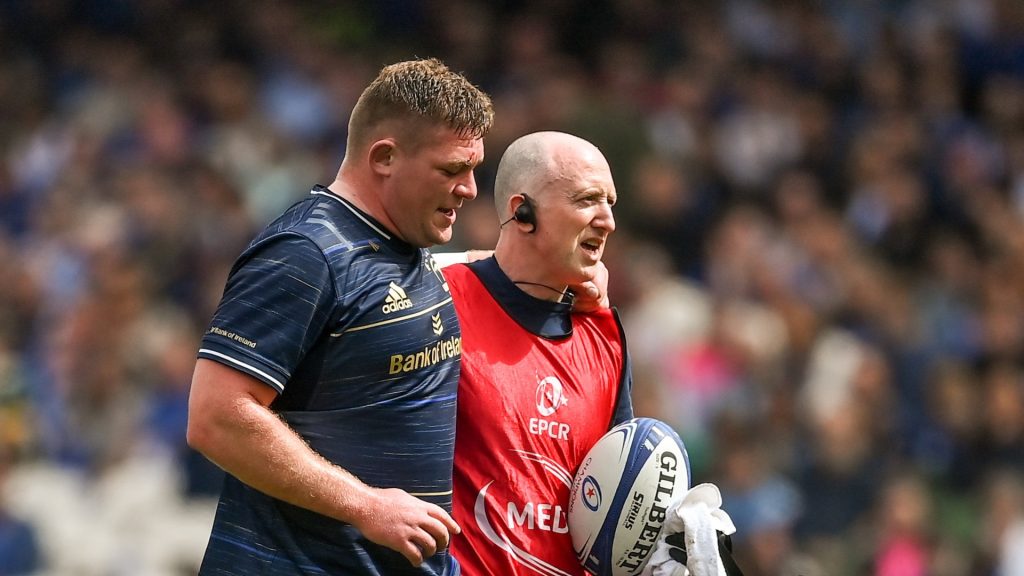 Leinster were left nursing some wounds in the aftermath of defeating Toulouse in the Heineken Champions Cup semi-finals, but coach Leo Cullen didn’t sound that concerned on Saturday evening when providing an update on the status of a casualty list featuring three of his forwards – including Tadhg Furlong.

The tighthead lasted just 17 minutes of the game in Dublin, with Ronan Kelleher and James Ryan later withdrawn in the second half. With the final just a fortnight away in Marseille on May 28, the health of the trio was an obvious go-to topic in the aftermath of the 40-17 victory over the 2021 champions.

“Tadhg seems to be okay there now,” reported Leinster boss Cullen when asked for an update on Furlong and the two others who left the Aviva Stadium scene early. “You could see him hobbling, so he has done something to his ankle. It didn’t seem to be too bad but the extent we will get figured out in the next couple of days.

“Ronan (Kelleher) went off so he will just go through the graduated return to play. James (Ryan) took a bang at the end on his shin but it doesn’t seem to be too serious from the first reports in there,  but we will get it all checked.”

Next up on the Cullen agenda is a Sunday afternoon on the couch to learn whether it is Racing or La Rochelle who will play Leinster in the final. “We will watch with great interest how Racing go against La Rochelle. I was listening to Mike Prendergast yesterday [Friday] and just the desire of Racing to win a European star from their owners all the way through the club, it’s a big goal of theirs.

“If they were to progress we know then as we came across them before in a final in Bilbao (in 2018) and La Rochelle, we experienced them first hand, we lost that semi-final last year when we didn’t deliver our best performance on the day.

“At this stage of the tournament you need to be delivering close to your best against the best teams in Europe, but it’s a hugely exciting challenge away against a French team down in Marseille which is a different environment and we have experienced that before.

“We were down there in a semi-final (against Toulon in 2015). We don’t have many players that are still around from that day. Johnny (Sexton) wasn’t even there, he was away at the time (at Racing) but there are parts of that game, that weekend that still lives strong in my memory for lots of the wrong reasons – but it is just a hugely exciting challenge. It has been a season of many twists and turns to get to this point.”

Reflecting on the semi-final win over Toulouse, Cullen added: “Credit to the lads, there was lots of good stuff in the game. It was amazing to run out in front of that crowd (of 42,076) as well. It was a short week so a huge effort to get that crowd in those numbers. That created a lot of energy for the team and they fed off that. Lots of good stuff against a very good team in Toulouse.

“The lads threw the kitchen since at it but Toulouse hung in and hung in and they are always a constant threat. You could see that in the first half where we were attacking in their 22 and lost possession and they are gone the length of the field. That constant threat was there the whole time but for our guys, I thought it was a good performance overall. There is still room for growth as always but to deliver a big performance in the semi-final is pleasing.”

‘Right now, if he stays fit, I’d take him’: The All Black chances for the Hurricanes’ front row veterans

RR vs DC: Was Very Disappointed When They Weren’t Playing Srikar Bharat In The XI: Parthiv Patel On Delhi Capitals

Leinster prove too much for reigning champs Toulouse

‘Right now, if he stays fit, I’d take him’: The All Black chances for the Hurricanes’ front row veterans

RR vs DC: Was Very Disappointed When They Weren’t Playing Srikar Bharat In The XI: Parthiv Patel On Delhi Capitals