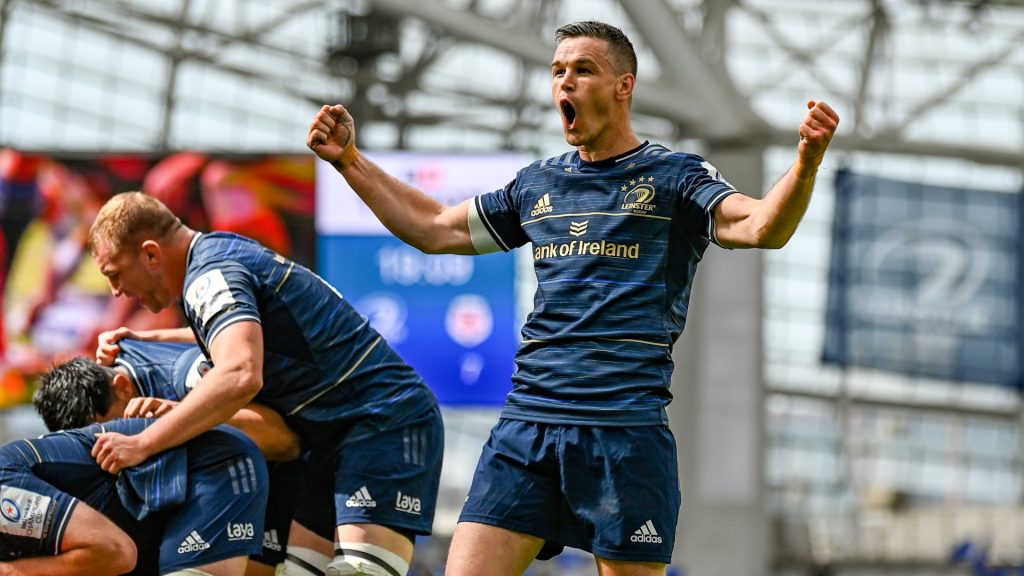 Leinster player ratings live from Aviva Stadium: This blockbuster encounter between the Heineken Champions Cup’s two most honoured teams comfortably went the way of the hosts in Dublin, Leinster impressively turning the screw to dethrone Toulouse on a 40-17 scoreline and set up a final in Marseille on May 28 against either Ronan O’Gara’s La Rochelle or Mike Prendergast’s Racing.

It was the third Saturday in five weekends that Toulouse were playing in Ireland, a quite bizarre sequence compared to Leinster who had spent a fortnight in South Africa and were in England last weekend.

The French giants had suckered Ulster in Belfast with a late Antoine Dupont converted try, anguished Munster with penalty shootout composure and were now back in Dublin looking to complete the three-peat against the biggest Irish obstacle of the all – the swashbuckling Leinster in their Aviva Stadium backyard.

It proved to be a step too far on a scorching afternoon outside the stadium by Irish standards – where the day was best spent on the beach with ice cream – was tempered by the shade and a cooling breeze inside. Not that the contest was completely all one-way: A seventh-minute breakaway Dupont score had left those of blue persuasion in a bumper 42,076 crowd numb but that feeling didn’t last.

Relentless physicality did for Leinster at this stage of the tournament last year in La Rochelle but they vowed they were now a much-improved outfit and so they demonstrated, tries from James Lowe and Josh van der Flier central to their 23-10 lead where the only disappointment was that they didn’t punish the Emmanuel Meafou yellow with points.

Just a stretch too far for the French side as they come undone at the Aviva@leinsterrugby go on to the #HeinekenChampionsCup final! ? pic.twitter.com/BBSP6MlBLU

However, a second Lowe try ten minutes after the interval left them coasting to a victory where a 66th-minute riposte off a maul from Selevasio Tolofua was only a consolation despite the excitement of Benjamin Kayser, the BT Sport pundit, two rows in front of RugbyPass in the press box. Instead, Hugo Keenan rounded off the rout in the final minute. Here are the Leinster player ratings:

15. Hugo Keenan – 7.5
Showed his class with the early run that promised a Leinster, only for Toulouse to gallingly profit down the other end with no full-back at home after Dupont blocked, gathered and raced clear with Jamison Gibson-Park’s grubber. He also endured the agony of flapping at a Caelan Doris pass with the line approaching. That didn’t unsettle him, though, as his concentration was on point the rest of the way through as evident in some late-game tackles and then his work rate to score the final try.

14. Jimmy O’Brien – 7
Took the biggest game of his career in his stride even though he was the least involved of the Leinster back three. It took three Toulouse players to stop him from reaching the line in the corner in the fourth minute, Leinster instead making do with penalty points from in front of the posts, and he was inches from fetching a Johnny Sexton crosskick just before the break.

13. Garry Ringrose – 7
Some rangy running had the crowd on its feet and while his missed tackle count again jumped off the stats sheet, it didn’t make his team vulnerable and he made up that issue in other ways to ensure Leinster were comfortably deserving winners.

12. Robbie Henshaw – 8
Hard yards were the name of his industrious game. Carried and tackled frequently, generating tempo on both sides of the ball. He felt hard done by when one possession he took to first-half ruck squirted out the side. Played 65 minutes, leaving with Leinster 30-10 clear and his job very well done.

11. James Lowe – 8
Was excellent at Welford Road when dispatching Leicester last weekend and he was at it again here, scoring two tries and kicking sweetly. Some missed tackles were his only drawback, but that is what you bargain for with Lowe who does much more in attack to dwell too much on that defensive observation.

10. Johnny Sexton – 9
The veteran played as if he was lolling about in his backyard at home, playfully tossing the ball around with his kids. Intelligently played cup rugby, snapping up penalty points where they were on offer and producing quite the compilation of moves and tricks in open play to keep the Toulouse defence guessing. There were two standout moments: Firstly, the inside pass that put in Lowe for his opening try and then the sumptuous break that generated the second try for van der Flier. Also added 15 points with his six from six return off the kicking tee.

9. Jamison Gibson-Park – 7.5
Revelled in a silver service from his pack at Welford Road but he has some issues here making good that repeat effort by his forwards. It was his blocked grubber that gave Dupont his try while he breathed relief that Romain Ntamack tripped up on the 22 when he intercepted a raking pass aimed at Lowe early in the second half. Those two moments aside, he was his usual bundle of energy and it was his charge down on Juan Cruz Mallia that led to Lowe’s second try.

FROM ONE END TO THE OTHER! ?

What a start to this match! Incredible run from Hugo Keenan cut short by the @StadeToulousain defence, only for the pieces to be picked up by Antoine Dupont who goes for 95 meters!

1. Andrew Porter – 7
Can’t be happy with the penalties against him at the scrum, particular the one early in the second half when he was blamed for a collapse. The set-piece is where he needs to be at his moist reliable but he more than made amends elsewhere, especially after Tadhg Furlong exited injured. He upped his work rate and made light the loss around the park of that prop powerhouse.

2. Ronan Kelleher – 7
A quietish excursion by his very high standards as he carried very little but he was his team’s busiest tackler by the time he took a game-ending bang to the head on 47 minutes when scrambling to snuff off a lineout throw that was caught at the front by Dupont of all people.

3. Tadhg Furlong – 8
Limped off after just 17 minutes with the score at 13-7 but had loads packed in by then in an accomplished all-action effort where he even stepped in at scrum-half on one occasion. Away from his bread and butter, his passing was exquisite, a looping right to left to free up Keenan on halfway and then a pop to usher Doris into wide-open acres in the Toulouse 22.

4. Ross Molony – 8.5
Very much an unsung – but very important – part of a Leinster pack where he has been enjoying his best season yet at the age of 28. That impressiveness continued here as he wasn’t in the slightest unsettled by the Toulouse physicality. Showed he has creative hands, too, with the pass that had Sexton racing through to set up van der Flier for his 19th-minute try. His lineout steal on halfway was also the catalyst for the play that produced the second Low try.

5. James Ryan – 7.5
Back in harness last weekend at Leicester for the first time since that brutal concussion sustained on March 12 at Twickenham against England, he is still not fully there yet but did more than enough here to suggest he is going pack quite an end-of-season punch for his double-chasing club and with Ireland in New Zealand. A holding-on penalty in 27 minutes would have been his only annoyance on an afternoon where a nicked lineout on 45 minutes has the crowd cheering loudly.

“We’re going to draw on all our experiences and try and go one step further” ?

Johnny Sexton keeps showing his class as he and @leinsterrugby cruise through to the #HeinekenChampionsCup final ?

“I’m still loving it, and hopefully proving my worth” pic.twitter.com/3WQQcS51sN

6. Caelan Doris – 8.5
Beautiful on the eye as ever, it was his sweet break off a Furlong pass that started the panic in the Toulouse defence (even though Keenan flapped at the resulting pass). He was smashed on his next carry with the French now alive to his danger but that temporary setback didn’t stunt his influence.

7. Josh van der Flier – 8.5
Played an all-court game that was best encapsulated by the minute when he expertly passed out of tackle while falling to the ground near halfway. He looked leggy when he got up but somehow was in support of Sexton to roll in Leinster’s second try.

8. Jack Conan – 7.5
Has recovered from that dip in form endured during the early stages of the Six Nations, but is still not the fully dominant Conan that deservedly nailed down the Lions No8 jersey last summer. It was his shoddy dropped catch that allowed a haunted Toulouse to grab a territorial break with the score at 20-7 and the visitors facing getting run out the gate with just 20 minutes gone. Then looked very relieved that he wasn’t in a heap of trouble when Ntamack tripped over after grabbing an interception.

Replacements:
18. Michael Ala’alatoa – 7.5
This wasn’t the grand stage the Samoan was signed for – he was inked in to deputise for those parts of the season when Furlong was away with Ireland the favoured tighthead’s early injury had him on the park on 17 minutes and looking the part despite needing some treatment 13 minutes later after Toulouse had gone early at a scrum and were penalised. Was excellently direct in two early second-half carries at a time when Leinster were looking to build on their 13-point halftime lead.

16. Dan Sheehan – 7.5
He arrived on 47 minutes when Kelleher was taken for a head injury assessment and he impressed. Threw a sweet lineout over the top at one stage to Henshaw in the middle and one monster leg drive in the tackle pierced Toulouse pressure with the score at 30-10.

23. Ciaran Frawley (for Henshaw, 65); 17. Cian Healy (for Porter), 21. Luke McGrath (for Gibson-Park), 22. Ross Byrne (for Sexton, all 68); 20. Rhys Ruddock (for van der Flier, 72); 19. Joe McCarthy (for Ryan, 76) – No ratings
Leinster held back the majority of their bench until late, only unloading at a juncture when their ticket to Marseille was already booked. Byrne did tack on a penalty to stretch the margin to a three-score 16 points on 75 minutes and later added a conversion.