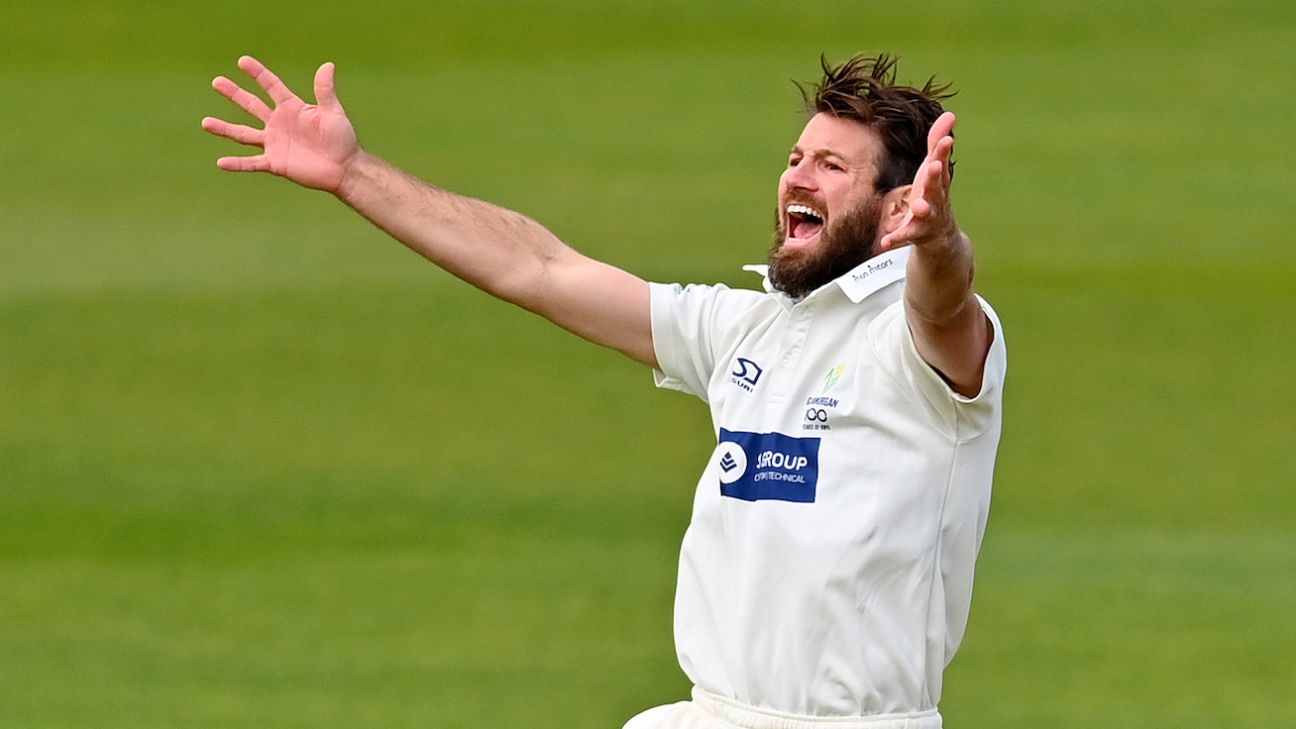 Glamorgan require 126 runs to defeat Durham in their LV= Insurance County Championship Division Two contest after Marnus Labuschagne inspired the visitors to bowl out the home side for 244 in their second innings at the Riverside.
Scott Borthwick and Alex Lees appeared to have put the hosts on course for a solid total with a stand of 138. However, Labuschagne was the unlikely hero with the ball to remove Lees, Borthwick and Ben Stokes before Michael Neser wrapped up the tail, ending with figures of four for 57 to hand Glamorgan control of the game.

The Welsh outfit lost two early wickets to Matthew Potts in pursuit of their target of 191. Labuschagne calmed the nerves until the penultimate ball of the day when he fell for 31, leaving the game in the balance.

Glamorgan had the chance to put the pressure on the hosts, who began day three trailing the visitors by 15 runs. Michael Hogan quickly made the breakthrough to dismiss nightwatchman Potts for three.

The pressure was on Borthwick and Lees, but the two players provided a solid foundation to see off the threat of the first hour. Borthwick looked in particularly good touch as he found the boundary with regularity. Although he did give one brief chance on 44 to Kiran Carlson at backward square leg, the left-hander made his way to a composed half-century for the third time of the season.

Whereas Borthwick made batting appear relatively simple, Lees was scratchy at the other end. He survived an lbw shout on 41 and then was put down by Neser at slip on 43 off Andrew Salter’s off-spin. The England opener managed to progress beyond fifty, even though was almost run out by Carlson. Lees’ fortune finally ran out when he played across the line to a half-tracker from Labuschagne and was given out lbw for 61, ending a stand of 138 with Borthwick for the fourth wicket.

Borthwick had played extremely well to reach 90 and was on the verge of his first ton of the campaign. However, he will have sleepless nights after being bowled from a straight full-toss from Labuschagne

The loss of the two set batters caused a collapse in the Durham ranks as David Bedingham fell cheaply for the second time in the game, while Ned Eckersley lobbed a loose drive straight to Hogan at mid-off.

The pressure was on Stokes to hold the innings together, but after being put down on 13 by Neser, who almost pulled off a fine diving catch, the England captain presented a third wicket to Labuschagne. Stokes lost his balance aiming for a booming drive and the quick hands of Chris Cooke removed the bails.

Neser wrapped up the tail by prising out Ben Raine and Chris Rushworth to finish with four wickets for the second time of the match, ending with figures of eight for 124. It was a brilliant effort from the Aussie in light of injuries to Timm van der Gugten and David Lloyd, leaving his side requiring only 191 runs to win the contest.

Potts made two early breakthroughs removing replacement opener Andy Gorvin and Salter to reduce the visitors to 15 for two, becoming the first bowler to pass 30 wickets in the County Championship in the process. A Labuschagne mistake from the penultimate ball changed the context of the game as Raine dismissed the Aussie for the second time to give Durham a glimmer of hope.

Jerome Bettis is a Pro Football Hall of Famer. Sunday he’ll be a Notre Dame graduate, too