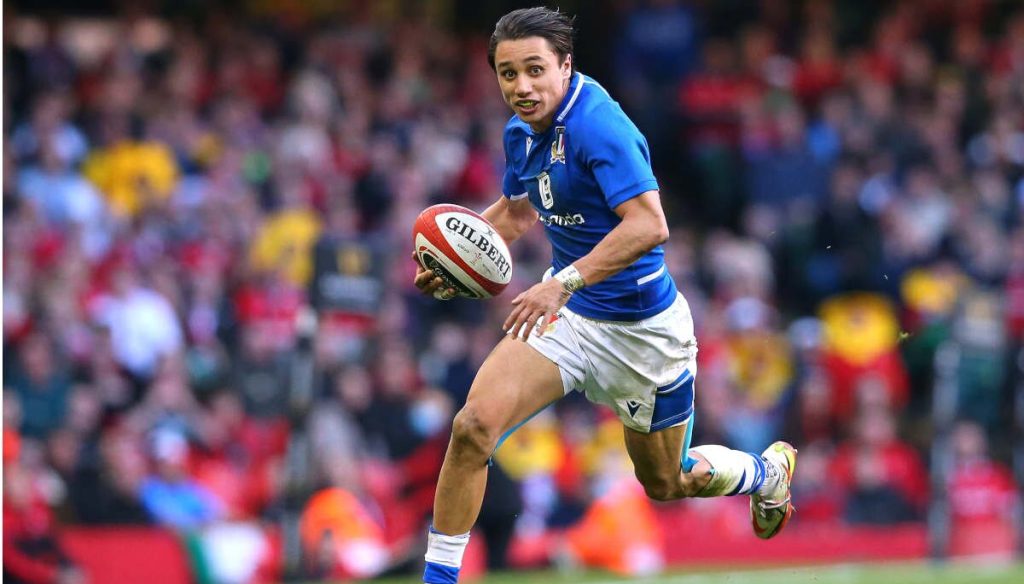 Italy’s Guinness Six Nations sensation Ange Capuozzo has explained why he has chosen to sign for Toulouse, a move confirmed this week by the French Top 14 giants.

The youngster signed a three deal with Stade Toulousain that will keep him at the Stadium de Toulouse until 2025. Capuozzo has spent the last three seasons at Grenoble before bursting onto the Test scene in dramatic fashion earlier thus year.

The lithe outside back was a nightmare to defend against, his late match winner against Wales in the Principality Stadium the standout moment of Super Saturday back in March.

“It was an easy decision to make,” the 23-yer-old told RMC in France.

“From a personal point of view, I’m coming to a time in my life when I need to put myself in difficulty, to leave and get out of my comfort zone. After these three years in Grenoble, it was the right time, at the right age, to see something else and discover another environment.”

“The fact of having spent these three years and having the possibility of marking the club with my imprint, it would also have been a dream. But this possibility touching the highest level in the world was even more of a dream. I have to give it a shot. I feel like I’m at the end of a process, my head freed .”

It seems he will in competition with new teammates Thomas Ramos and Melvyn Jaminet, although he could well play on the wing as well as at his preferred fullback. Despite have a frame more like that of a professional footballer, Capuozzo does fear putting himself in ‘danger’.

“I put myself in danger, I will have to question myself, that I work on my personal environment, that I do pay attention to all the little details of my life. It will make me grow. This competition does not scare me at all, on the contrary. I know it will be a very big challenge, but it will make me progress too.”

LSG vs GT: It’s Always Pleasing To Contribute In A Win – Shubman Gill After Winning MoTM vs LSG

Pride for Mumbai, last-gasp effort for CSK as old rivals come together again

Jonny Bairstow: ‘There is a difference in being unselfish and it being a difficult competition’

Every MLB team’s most pleasant surprise so far in 2022

LSG vs GT: It’s Always Pleasing To Contribute In A Win – Shubman Gill After Winning MoTM vs LSG

Pride for Mumbai, last-gasp effort for CSK as old rivals come together again

Jonny Bairstow: ‘There is a difference in being unselfish and it being a difficult competition’