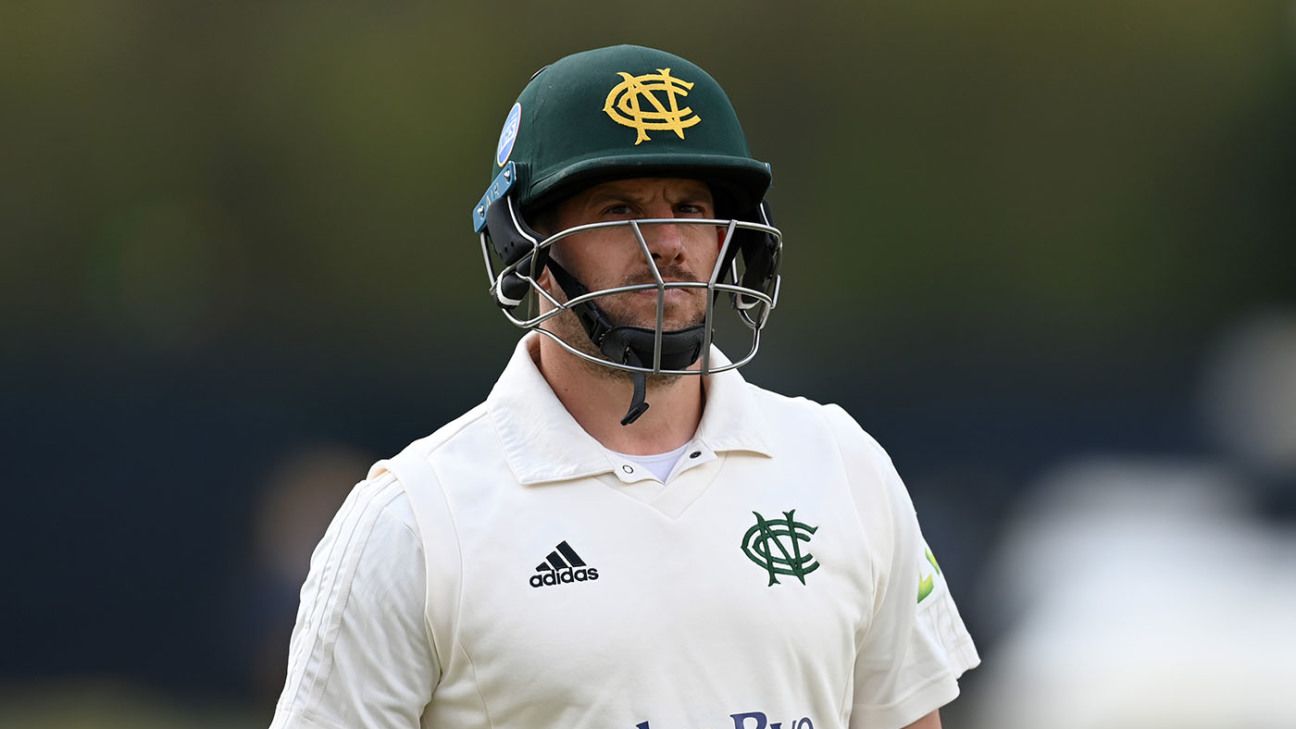 Steven Mullaney and Luke Fletcher left Middlesex facing the prospect of their heaviest ever runs defeat at Lord’s on a sobering third day of their LV= Insurance County Championship clash.
Mullaney plundered a magnificent unbeaten 55-ball hundred littered with mighty blows while Fletcher scored his second 50 of the match and Joe Clarke hit 66 not out before the visitors declared on 295 for 5, some 515 runs ahead.

Fletcher wasn’t done there either, ripping out both Middlesex openers for ducks among figures of 2 for 6 as the host struggled to 69 for 3 at the close.

They need to reach 216 to avoid rewriting the record books, having lost by 301 runs to Ray Illingworth’s Leicestershire at the home of cricket in 1976.

Fletcher, however, revelled in his role as night-watchman, picking up where he’d left off 24 hours earlier to plant a rare half-volley from Tim Murtagh into the grandstand. The shot travelled down the stairs of the stand meaning Middlesex opener Mark Stoneman was forced to temporarily leave the field to retrieve the ball from the spectator concourse.

While Ben Slater took 28 balls to get off the mark, Fletcher made hay in the sun, forging on to make his second 50 of the match, the first time he’d ever achieved the feat in his professional career. As in the first innings he departed to his next ball, trapped lbw by Martin Andersson.

Ben Duckett continued the momentum, hitting Luke Hollman for three fours in an over before attempting to reverse sweep the leg-spinner only to send it down the throat of skipper Peter Handscomb at long leg.

Hollman, who returned three for 77, struck again in his first over after lunch with a superb caught and bowled to remove Slater and he later dislodged Lyndon James’ off-bail with one which proved too close to cut.

The remainder of the innings however was batting carnage, Joe Clarke pulling a short ball from Murtagh into the Grandstand as he moved to 50 in 73 balls.

This though was snail-like compared to skipper Mullaney, who first hit Hollman out of the attack before planting his replacement Josh De Caires into the Warner Stand over cover as his half-century came in 31 balls.

Incredibly he then accelerated, racing to 100 in another 24 deliveries, smiting Andersson for two sixes in an over and then belting Hollman back over his head with a shot which struck the pavilion sightscreen.

The declaration came leaving Middlesex facing a record chase for 516 or pragmatically four sessions to bat for a draw.

Fletcher all but ruined those hopes with his opening salvo, removing Stoneman caught a slip for a second ball duck before bowling De Caires, also without scoring, the ball deviating from the glove to the wicket, the youngster’s decision to withdraw the bat having come too late.

Handscomb somehow survived 46 torturous minutes before edging James Pattinson to Duckett at second slip to leave the Seaxes 32 for 3.

Robson though stood firm, surviving a huge caught behind shout when on 6 to reach a stubborn 50 shortly before the close and hopes of an unlikely draw rest heavily on the shoulders of the former England opener.

The Road To Perdition

Delaware State lacrosse player says bus stop, search ‘something no one should go through’

The Road To Perdition