Novak Djokovic: ‘It’s always a big blow for the tournament if…’ 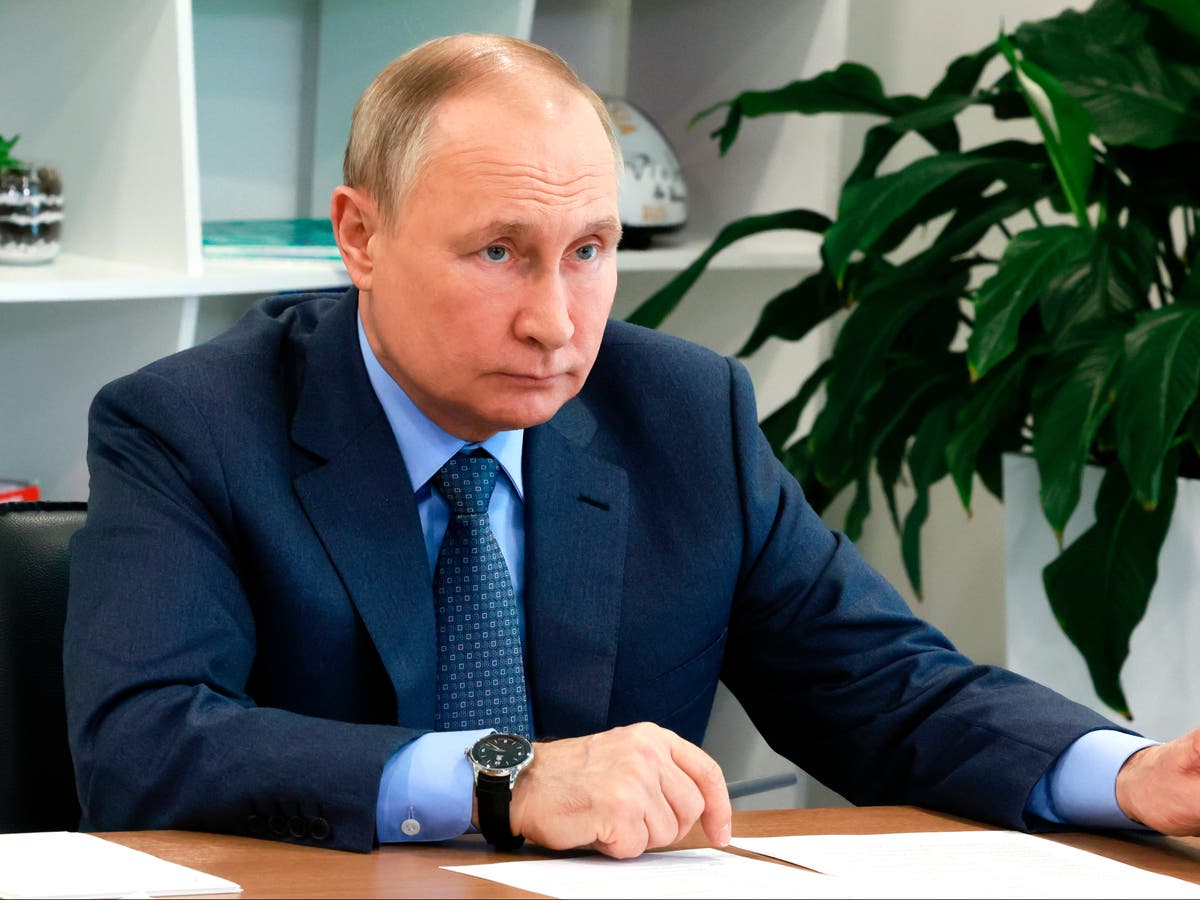 Vladimir Putin is “very ill with blood cancer” an oligarch with close ties to the Russian leader was reportedly recorded saying.

A recording obtained by New Lines, a US magazine featured the unnamed oligarch discussing Putin’s health with a Western venture capitalist in mid-March.

He said the Russian president had to have surgery for blood cancer shortly before ordering the invasion of Ukraine.

Mr Putin’s health has been subject to much speculation recently as he appeared frail at Victory Day celebrations on Monday while and a video circulated showing him shaking.

Meanwhile, Ukraine drove Russian troops away from Kharkiv, its second-largest city, in the fastest advance since Kremlin forces pulled away from Kyiv and the northeast over a month ago, although Moscow is still bombarding villages north of Kharkiv.

The city has been quiet for at least two weeks and Reuters journalists have confirmed Ukraine now controls territory stretching to the Siverskyi Donets River, around 25 miles to the east.

Ukrainian forces destroyed parts of a Russian armoured column as it tried to cross a river in the Donbas region, video from Ukraine’s military showed on Friday, as Moscow appeared to be refocusing its assault in the east after a new pushback by Kyiv.

Ukraine has driven Russian troops away from the second-largest city of Kharkiv in the fastest advance since Kremlin forces pulled away from Kyiv and the northeast over a month ago, although Moscow is still bombarding villages north of Kharkiv.

Some six miles north of the city, firefighters doused smouldering wreckage in Dergachi after what local officials said was an overnight Russian missile attack on the House of Culture, used to distribute aid. Volunteers inside were trying to salvage packages of baby diapers and formula.

“I can’t call it anything but a terrorist act,” the mayor, Vyacheslav Zadorenko, told Reuters. “They wanted to hit the base where we store provisions and create a humanitarian catastrophe.”

Vladimir Putin is “very ill with blood cancer” an oligarch with close ties to the Russian leader has reportedly been recorded as saying.

Vladimir Putin is “very ill with blood cancer” an oligarch with close ties to the Russian leader has reportedly been recorded as saying (Thomas Kingsley writes).

The unnamed oligarch was recorded discussing Putin’s health with a Western venture capitalist in mid-March in a recording obtained by New Lines, a US magazine.

The new claims come amid mounting health concerns about the Kremlin leader who has appeared frail at public events including the Victory Day celebrations last week while videos have circulated showing president Putin “shaking uncontrollably.” Publicly the Kremlin has stated that Mr Putin is fit and well but his strict precautions during the pandemic and use of a long table to meet other political leaders have strengthened rumours.

The Russian oligarch says in the recording that Mr Putin had surgery on his back linked to his blood cancer shortly before ordering the invasion of Ukraine – which he has called a “special military operation”. He adds that the president has gone “crazy”.

The bodies of Russian soldiers killed in Ukraine were brought to a rail yard outside Kyiv and stacked with hundreds of others in a refrigerated train, waiting for the time when they can sent back to their families.

“Most of them were brought from the Kyiv region, there are some from Chernihiv region and from some other regions too,” Volodymyr Lyamzin, the chief civil-military liaison officer, told Reuters on Friday as stretcher-bearers in white, head-to-toe protective suits lifted bodybags into the box cars.

He said refrigerated trains stationed in other regions across Ukraine were being used for the same grim purpose.

There have been no reliable estimates of the scale of Russia’s losses but Ukraine puts the death toll at around 25,000, while a Russian soldier was reportedly intercepted complaining that around that number of troops had been lost.

Russian and US defence ministers speak for first time since invasion

Russian Minister of Defence Sergei Shoigu spoke with US Defence Secretary Lloyd Austin on Friday after months of refusing direct contact with his American counterpart. But officials said the call didn’t appear to signal any change in Moscow’s war in Ukraine.

A senior Defence Department official said while Mr Austin believes the hour-long conversation was important in the effort to keep lines of communication open, it didn’t resolve any “acute issues” or lead to any change in what the Russian are doing or saying as the war enters its 12th week.

The call – initiated by Mr Austin – marked the highest level American contact with a Russian official since the war began in late February. Over the past several months, Pentagon officials have repeatedly said that Russian leaders declined to take calls from Austin and Army General Mark Milley, chairman of the Joint Chiefs of Staff.

This is the first conversation between Mr Austin and Mr Shoigu since 18 February, a week before the war started. Another senior official said Friday that Mr Milley is expected to also reach out to his counterpart, General Valery Gerasimov, Russian chief of the general staff.

In a statement, the Pentagon said Mr Austin “urged an immediate ceasefire in Ukraine and emphasised the importance of maintaining lines of communication.”

US seeks to clarify Turkey’s stance on Nordic Nato accession

The US will seek to clarify Turkey’s position on Sweden and Finland joining Nato at a meeting this weekend after President Recep Tayyip Erdogan suggested his country would use its veto on membership to block their admission.

See also  Biden to order federal flags to fly at half-staff as the U.S. Covid toll nears one million.

US secretary of state Antony Blinken is scheduled to meet his Nato counterparts, including the Turkish foreign minister, this weekend in Germany and White House press secretary Jen Psaki said Washington was trying to establish the basis of Turkey’s attitude.

The Turkish president earlier explained his opposition by citing Sweden and other Scandinavian countries’ alleged support for Kurdish militants and others considered by Turkey to be terrorists.

He said he also did not want to repeat Turkey’s past “mistake” when it agreed to readmit Greece into Nato’s military wing in 1980. He claimed the action had allowed Greece “to take an attitude against Turkey” with Nato’s backing.

Mr Erdogan did not say outright that he would block any accession attempts by the two Nordic nations, but Nato makes all its decisions by consensus, meaning each of the 30 member countries has a potential veto over who can join.

Russia to include Ukraine’s Kherson in its territory, claims UK

The military-civilian administration imposed by Russia in Kherson is set to include the southern city Kherson into its fold, claimed the British defence ministry on Saturday, warning that the Kremlim planned on using rigged referendums.

“The Russian-imposed military-civilian administration in Kherson announced they will ask Russia to include Kherson Region in the Russian Federation. A central part of Russia’s original invasion plan was highly likely to use rigged referendums to place the majority of Ukraine’s regions under long-term pro-Russian authority,” the ministry said in its latest intelligence update.

It added: “The fact that Russia has only succeeded in imposing a pro-Russian local leadership in Kherson highlights the failure of Russia’s invasion to make progress towards its political objectives in Ukraine.”

The defence ministry said that in the event Russia carries out an accession referendum in Kherson, “it will almost certainly manipulate the results to show a clear majority in favour of leaving Ukraine.”

Citizens in the Kherson region are likely to continue to demonstrate their opposition to Russian occupation, the ministry said.

India bans exports of wheat over threat to food security

India will not be sending out wheat outside its borders effective immediately, officials announced on late Friday, citing a threat to its food security.

“Export will be allowed in case of shipments where an irrevocable letter of credit is issued on or before the date of notification. Export will be allowed on the basis of permission granted by the government of India to other countries to meet their food security needs and based on the request of the governments,” the official order from Directorate of Foreign Trade said.

It added that a surge in global prices of wheat has sparked a threat to food security of India and neighbouring vulnerable countries.

India is the second biggest wheat producer globally was eyeing to ship out a historic 10 million tonnes this year as war started by Russia gripped Ukraine paralysed the wheat exports. Both the countries account for a third of wheat and barley exports.

The ripple effect of shutting down wheat exports from India is likely to lead to sharp rise in global prices, experts have warned.

Russia to cut power supply to Finland from 1am today

Officials at the Russian state energy said the Kremlin will end electricity supplies to Finland starting 1am on Saturday citing payment difficulties.

Rao Nordic, Russian state energy holder Inter RAO’s subsidiary, said that it was “forced to suspend the electricity import” from 14 May.

It added that the energy firm is “not able to make payments for the imported electricity from Russia.

“This situation is exceptional and happened for the first time in over 20 years of our trading history,” the statement added.

Fingrid, Finnish grid company, confirmed the slashing of imports in electricity “for the time being” as it was facing problems in receiving payments for selling electricity in the market but added that “there is not threat to the adequacy of electricity in Finland.

The situation on Ukraine’s battlefield against Russian offensive is “far worse” than what the country saw when the war began in February, Ukrainian lawmaker Oleksandra Ustinova said.

Calling the situation “hell” on the frontlines right now, Ms Ustinova said that Ukraine is “losing many more men now than it was at the beginning of the war” while addressing reporters at German Marshall Fund roundtable in Washington on Friday.

The battle-marred country needs the Multiple Launch Rocket System (MLRS), Paladin self-propelled howitzers, and fighter jets like the F-16s and training of Ukrainian troops from the US to use such jets, the lawmaker said, reported CNN.

She added that Ukraine does not need Soviet-era MiG fighter jets because the “war has changed”.

At least one person was killed and 12 other civilians were injured after Russian shelling struck the region on Friday, officials said.

Who Is ‘Wagatha Christie’? Let Us Explain.