We all are aware that not giving way to an emergency vehicle, be it an ambulance, fire brigade or even police vehicle is a an offence and there can be hefty fine for that. Same way obstructing regular traffic on a road too is an offence. We have seen several videos of people moving in front of emergency vehicles without giving way and blocking way for other vehicles. In most of the cases, concerned authorities have taken action against the offenders and some of them have been reported on our website as well. Here we have a video, where an Activa rider from Kerala is seen riding in front of a Kerala State Road Transport Corporation bus without giving way.

The video has been shared by asianetnews on their YouTube channel. In this video a Honda Activa rider is seen riding in front of a Kerala State Road Transport Corporation (KSRTC). It initially looked like the rider wanted to take a right turn and that is why he is coming to the center of the road. He proves it wrong almost immediately. The video seen here is probably recorded by a passenger who was in the bus at the time of the incident.

The Activa rider continues to move in front of the bus obstructing the way. According to the report, the rider kept on riding like this for almost 4 km. He can be seen turning his head around to see where the bus exactly is. Whenever he finds that there was a gap from where the bus can overtake, he moves his scooter to the middle of the lane blocking the way. The bus in this video was coming from Kozhikode to Ernakulam. The bus is moving through a very narrow two lane road inside the city. There is not enough space for the bus driver to pick up speed and overtake as there were vehicles coming from the opposite direction. 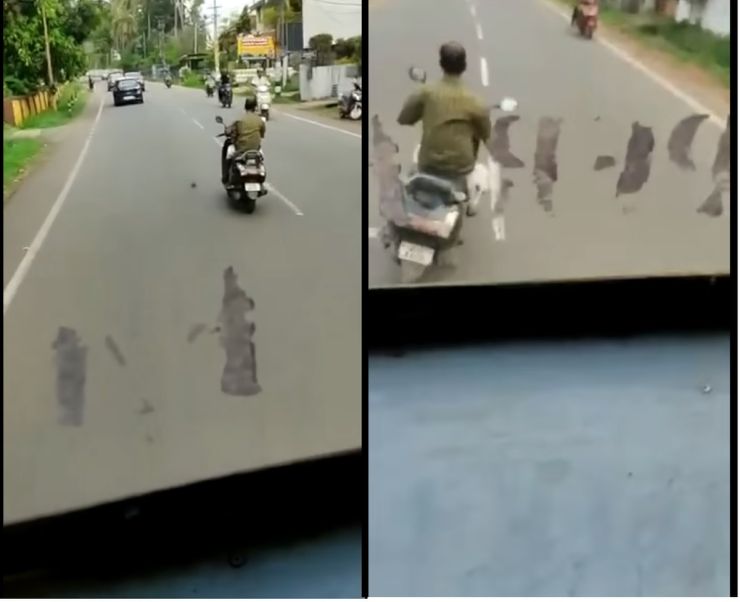 The rider even indicates with his hand to not overtake while he came to the middle of the road. He even applied brakes abruptly couple of times. The passengers in the bus can be heard shouting at the rider. Another thing that must be noted about the rider is that he is not wearing a helmet and he is also not wearing a mask. In Kerala, it is still mandatory wear a mask in public places and the person failing to do so can be fined. At one point, he can be seen picking up the helmet and attempting to wear that but, in rest of the video he is seen without a helmet.

The passengers in the bus can be heard saying that they are recording the video and the bus driver and conductor can lodge a complaint against the rider. It is very clear from the video that the rider was intentionally blocking the way of the bus which was slowing down the bus as well as other vehicles behind the bus. In the past, similar incidents have been reported from Karnataka where a youth was thrashed by people for not giving way to govt. bus. In this case, it is not clear whether MVD has come across this video or whether they have taken any action against him or not.

New Volkswagen Aero B spied ahead of 2023 launch

New Volkswagen Aero B spied ahead of 2023 launch