It was last year that Ahmed Khan, Bollywood’s popular director, choreographer and producer gifted his wife a custom made Batmobile on her birthday. There are several pictures and videos of Ahmed Khan and his wife posing with the vehicle and driving it on the road. Batmobile is quite special and is a very sight on our roads. Here we have a video where a YouTuber is seen checking out the car during his visit to Ahmed Khan’s house. Ahmed Khan is a popular face in judging panel of several reality shows and has also directed movies like Baaghi and Heropanti.

The video has been shared by Flying Beast on their YouTube channel. In this video, vlogger and his family are travelling to the residence of the Bollywood director. After arriving at the residence, vlogger and his family have a casual conversation with Shaira Ahmed Khan. After some time, Ahmed Khan himself joins the conversation. After spending some time, when the vlogger was about to leave, he came across the custom made Batmobile on his porch. Vlogger was very excited to see the Batmobile and Ahmed Khan also did not shy away from showing off the car to the vlogger. They can be heard saying in the video that the Batmobile looks huge.

After checking out the exteriors, he is opened the door and let vlogger sit inside. The Batmobile has been inspired by the Batmobile that was used in Michael Keaton’s Batman film released in 1989. Batmobile is one of the most iconic vehicles in the film industry and many people consider it as a character of the Batman films. We will be seeing Michael Keaton’s Batman in the upcoming Flash movie which is expected to release next year. Which means, chances of spotting the Batmobile in the movie are pretty high.

See also  Gas Prices In US Are Back To Record Highs, Oil Up Only Slightly 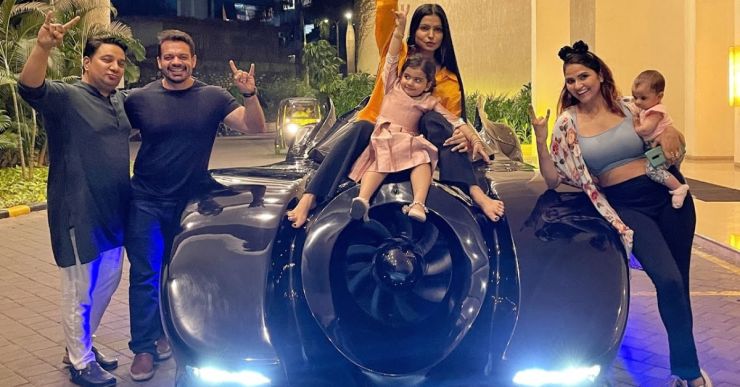 The Batmobile seen here in the video as mentioned above was gifted to Shaira Ahmed Khan on here birthday. It came all the way from United States of America. It is made by USA based custom Batmobile manufacturer, Gotham Motors. They Batmobile was sent to India and was assembled here by Mumbai-based Executive ModCar Trendz. It took almost 8 months to finish the project. According to reports, the Batmobile modifications costs around Rs 40 lakh. The engine used in this car is a 4.7 litre twin turbocharged petrol engine that generates 463 bhp and around 700 Nm of peak torque.

Michael Keaton’s Batmobile has appeared in two movies namely, Batman and Batman Returns. The illustrations were done by Julian Caldow and the final body was sculpted by Keith Short. It measured 260.7 inches in length, 94.4 inches in width and 51.2 inches in height. It was built on a chassis from Chevrolet Impala. The engine was a V8 and was sourced from Chevrolet. It was modified from a 1970 Corvette body. This is not the only Batmobile in India. Chief Executive Officer of Serum Institute of India, Adar Poonawalla  owns a Batmobile which he gifted to his son Cyrus Jr. Adar Poonawalla’s Batmobile is actually based on a Mercedes-Benz S-Class luxury sedan.

Carvana Lays Off 12% Of Its Work Force On The Same Day It Buys Auction Rival For $2.2B

Carvana Lays Off 12% Of Its Work Force On The Same Day It Buys Auction Rival For $2.2B