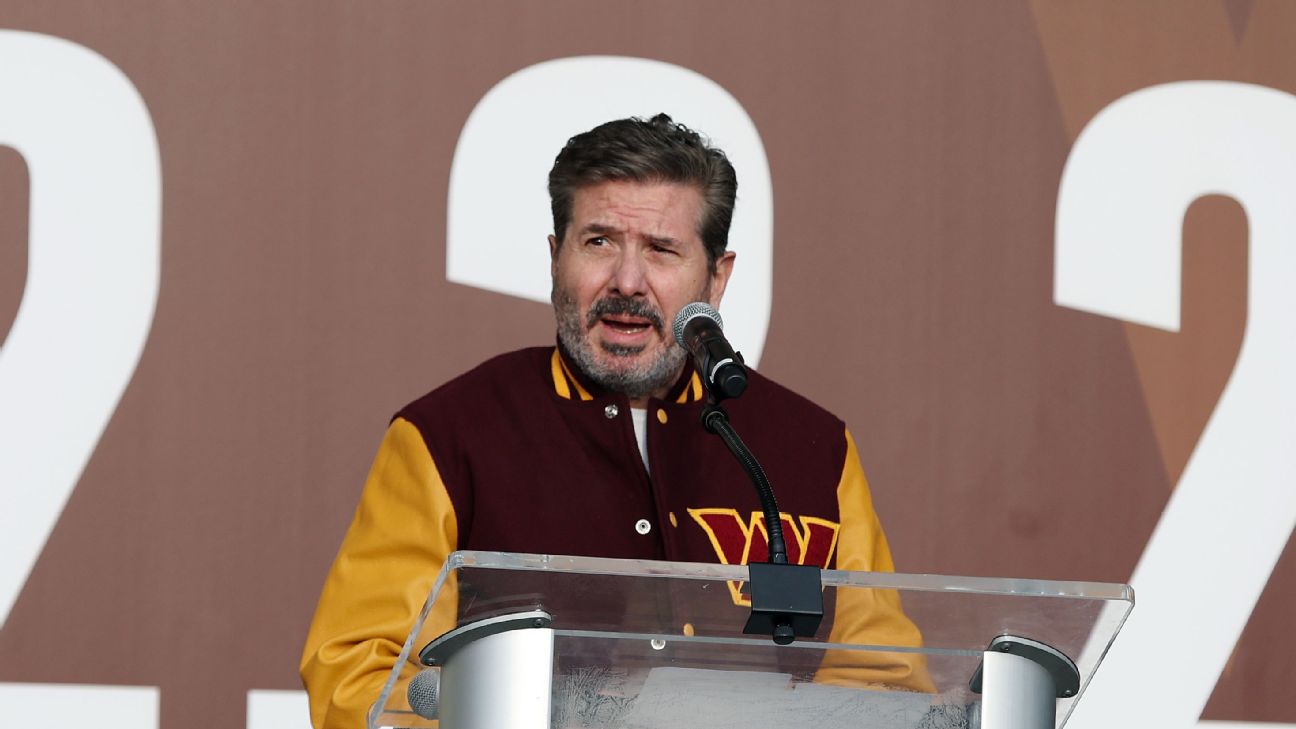 Washington Commanders owner Daniel Snyder conducted a “shadow investigation” of allegations that he had fostered a toxic work culture within his organization and worked closely with the NFL to monitor and, ultimately, bury the findings from an official internal investigation, according to findings by a Democrat-led U.S. House committee released Wednesday.

The U.S. House Oversight Committee released a 29-page memo on its findings, supported by more than 600 pages of depositions, on the morning that NFL commissioner Roger Goodell was scheduled to testify.

Among other allegations described in the memo, the committee’s eight-month investigation found evidence that Snyder used subpoena authority available to parties involved in overseas lawsuits to obtain correspondence from former president Bruce Allen and other former employees. The goal, according to the memo, was to build a case to the NFL that Allen was to blame for the team’s toxic workplace environment, and that former employees were conspiring to disparage him.

The committee says Snyder used a common-interest agreement between the Commanders and the NFL to “attempt to steer the direction” of the independent investigation into the team led by attorney Beth Wilkinson and to discredit the people accusing him, including those cited in reports published by The Washington Post, by providing the NFL and Wilkinson with “derogatory information about them.”

Snyder has repeatedly declined to appear at Wednesday’s hearing, telling the committee he would be out of the country on business.

When asked for comment Wednesday, the NFL provided a copy of Goodell’s prepared remarks to the committee, in which he repeated his assertions that “workplace in Washington was unprofessional and unacceptable in numerous respects,” and that “the workplace at the Commanders today bears no resemblance to the workplace that has been described to this committee.”

Representatives for Snyder and the Commanders did not immediately provide comment to ESPN on Wednesday. A spokesman for the Republican ranking member of the committee, James Comer (R-Kentucky), who’s been outspoken about how Congress shouldn’t be involved in investigating the Commanders, declined to comment on the memo Wednesday.

According to the memo, authored by committee chair Carolyn Maloney (D-New York), Snyder and his lawyers compiled a “100-slide dossier” in November 2020 that “appears to be based on private text messages, emails, phone logs and call transcripts, and social media posts from nearly 50 individuals.”

Snyder’s attorneys presented the 100 slides, which also included information about Washington Post journalists, to the NFL and Wilkinson’s team, according to the memo, with the goal of “crafting an exculpatory narrative to present to the NFL showing that he was not responsible for the Commanders’ toxic work environment but instead was the victim of a coordinated smear campaign.”

In the memo, committee investigators detail how Snyder’s lawyer obtained some of the private information used in the dossier. In 2020, Snyder filed a defamation lawsuit against Media Entertainment Arts Worldwide, which is based in India. As part of that lawsuit, Snyder used “a powerful litigation tool available to parties to a foreign proceeding to compel phone records, emails, and other documents from former employees and other individuals,” according to the memo.

“A close examination of Mr. Snyder’s [petitions] suggests that his focus was not on discovering the sources of the MEAWW articles but on those who were behind the Washington Post exposés,” the memo states.

The judge labeled the subpoena attempt “improper, unnecessarily invasive” and “may be less of a bona fide effort to obtain evidence supportive of the claims in the Indian Action, than they are an effort to burden and harass individuals formerly associated with the Washington Football Team who may have acted as sources for The Washington Post.”

Committee investigators state Snyder also “targeted” Allen with a petition filed in Arizona, where Snyder’s lawyers told the court that the documents would reveal Allen as a source for reports made by The Washington Post. Investigators note that Snyder’s attorneys collected 400,000 emails from Allen’s inactive Commanders email account and provided them to the NFL and Wilkinson.

NFL representatives told committee staff that Snyder’s attorneys “identified the specific inappropriate Bruce Allen emails in attempting to demonstrate that Bruce Allen had created a toxic environment at the Washington Commanders,” prompting a “targeted review” of Allen’s emails by the NFL, which in turn led to the examination of “troubling exchanges between Mr. Allen, former Raiders Coach Jon Gruden, and [NFL lawyer] Jeff Pash,” according to the memo. Those emails led to Gruden’s firing after they were leaked to the media last year.

The memo states that the NFL received at least 16 briefings from Wilkinson’s law firm on her findings between August 2020 and June 2021, including at least four written briefings, and that Goodell was “personally briefed” at least twice. Goodell said in his prepared remarks that “we did not receive a written report of Ms. Wilkinson’s findings.”

The memo also details allegations from David Pauken, the Commanders’ chief operating officer from 2001 to 2006, who told the committee that Snyder knew about sexual harassment against female employees but declined to take action, personally made the decision to fire female employees who engaged in consensual relationships with male employees, and sexualized and disparaged cheerleaders.

According to the committee memo, “Pauken testified that Mr. Snyder was responsible for the overly sexual nature of the cheerleading program and mocked Mr. Pauken for opposing his vision.”

In his testimony to Congress, Pauken stated he was uncomfortable with “the way the NFL sexualizes cheerleaders.” Pauken testified that Snyder, along with another team executive, pushed for the team to offer sponsors and suite holder access to cheerleader photo shoots as a “an experience that could be sold.”

“I never allowed it,” Pauken testified.

Pauken also described how Snyder repeatedly questioned Pauken’s sexuality by asking Pauken whether he “liked girls.” In his deposition, Pauken explained, “That anybody who likes girls likes cheerleaders, and if you don’t, if you’re uncomfortable with the cheerleaders, maybe you don’t like girls. That was my understanding of where he was going with that.”

Pauken also described how Snyder “objectified Commanders cheerleaders and made crass comments about their physical appearance,” according to the committee memo. When summoned to Snyder’s box before a game, Pauken testified how Snyder remarked to a friend, “Do you think Dave is gay?” To which the friend responded, “Yeah, he must be gay.”

According to Pauken’s deposition, Snyder “would say, yeah, he has to be gay. As ugly as these cheerleaders are. Pauken, are you gay? You must be gay. How could you have a cheerleading squad that looks like this?”

The committee found evidence that Snyder ordered the firing of two cheerleaders for “engaging in romantic relationships” with former tight end Chris Cooley, according to the memo. Pauken testified that when he learned about the relationships, he shared them with Snyder, who made the decision to fire both cheerleaders.

“The female employees were fired, the male employee was — there were no repercussions other than he was restricted from additional sex with the cheerleaders,” according to Pauken’s deposition.

See also  'He wants to take over the league': Bears impressed with Justin Fields' growth in Year 2

The committee memo states, “Snyder’s decision was part of a pattern of firing female employees who engaged in consensual sexual relationships with male members of the team’s football operations in order to ‘minimize distractions, temptations for players.'”

In his testimony, Pauken also told committee investigators that when Snyder learned a member of the team’s coaching staff had groped a public relations employee, Snyder refused to take action against the coach and instead directed the employee who had been groped to “stay away from the coach.”

Pauken told the committee: “I knew the importance of things that were important to [Snyder]. This was a new coach and we weren’t going to disrupt that new coach. And so we were going to make the problem go away as best we could.”

Another former chief operating officer, Brian Lafemina, told committee investigators during his deposition that in 2018, a subordinate had reported feeling uncomfortable interacting with Larry Michael, the former “Voice of the Washington Commanders,” after Michael had kissed her on the forehead, touched her on the cheeks and made comments about her appearance.

Lafemina testified that when he told Snyder, he replied, “Larry was a sweetheart and that Larry wouldn’t hurt anybody.”

Committee staff stated in their memo that Michael was accused of sexual misconduct by multiple employees spanning several years and, according to materials presented by the NFL to the committee, was caught on video making lewd remarks about a Commanders intern.

Michael resigned shortly after The Washington Post first reported on allegations against him in 2020.

The committee memo also shared details from the deposition of Jason Friedman, a former employee who accused the team of financial improprieties during his testimony and sent a letter to Congress stating he witnessed Snyder trying to push another former employee, Tiffani Johnston, into a waiting limo after Snyder placed his hand on her thigh under the table of a work dinner about 13 years ago.

Friedman told congressional investigators that the team’s culture “glorified drinking and womanizing” and that Snyder personally “pressured employees to drink excessively,” according to the memo.