Steph Curry adds to a list of athletes who hosted ESPYs 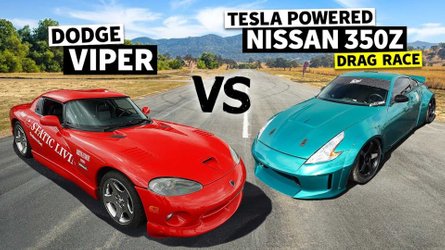 This is a drag race between the past and the future. A 2002 Dodge Viper takes on a Nissan 350Z with a Tesla powertrain swap. Both machines are impressive in their own way, but watch to see which takes more victories.

The Viper is mostly stock. The only tweak to the 8.0-liter V10 engine is a Borla exhaust, so the output should be around the factory-spec 450 horsepower (336 kilowatts). The car also has a set of lowering springs, and it wears Toyo R888 tires.

The other vehicle is far from stock. Starting life as a 2006 Nissan 350Z, it now has a custom Liberty Walk 370Z body kit and a Tesla Model S powertrain. The output is roughly 620 hp (460 kW). The batteries are underneath the hood where you’d usually find the V6 engine. To make that work, there are modifications to the chassis to accept the Tesla rear subframe. There’s also an air suspension. A custom center stock includes a tablet for controlling the system.

The first race is heads-up over a 1,000-foot (304.8-meter) distance. Despite being down on power and not having the instant torque of electric motors, the Viper manages to win. It takes a lead off the line and stays ahead the whole time.

The second race is similar to the first, except the Viper can’t take off until the 350Z launches. Obviously, the Nissan is in the lead at the beginning, but the Dodge closes the gap. At the finish line, the Tesla-powered Z is just half a car length ahead. Another few feet of road, and the Viper would have won.

The third race is from a 20-mile-per-hour (32-kilometer-per-hour) roll. Similar to the previous run, the 350Z takes an early lead, but the Viper is gaining on it. The Tesla-powered Z takes a second win in another close competition.

Finally, there’s one more heads-up race, and it’s the best of the bunch. The Viper takes a brief lead off the line. Then, the Z moves ahead. The Dodge is real competition and manages to win by a nose.