Report: 75% Have Heard About Crypto in Spain, According to the CNMV

Footage posted to social media of the June 10 protest shows 15-year-old Mudassir Alam raising his fist in the air as the crowd chants, “Long live Islam.”
More shots ring out, and Mudassir falls to the ground.
“He’s dead!” a bystander shouts, as people try to stop blood flowing from a wound to the teenager’s head.
#shooting-with-sound{margin:20px 0;} #shooting-with-sound video,#shooting-with-sound img{margin: 0; position: relative; width: 100%;} .cap_cp1{-webkit-font-smoothing:antialiased;padding:0 0 5px 5px; font-size:16px; color:#595959;} .cap_cp1:before{content:””;display: block;height: 1px;margin-top: 10px;margin-bottom: 10px;width: 80px;background-color: #C5C5C5;}
Mudassir died later in hospital, one of two young men killed in the Ranchi clash — the latest victims of a deepening religious divide between India’s majority Hindu population and the minority Muslim community.
The June 10 protest was one of several demonstrations that erupted around the country after two former spokespeople for India’s ruling Bharatiya Janata Party (BJP) made derogatory comments about Islam’s Prophet Mohammed.
Mudassir’s grieving father, Parvez Alam, doesn’t know who killed his teenage son, but in a police complaint he accused officers of “indiscriminately firing using AK-47s and pistols targeting the Muslim mob.”
He claimed at least three other men were firing bullets at protesters from the rooftop of the Hindu Shree Sankat Mochan Hanuman Temple near where Mudassir was standing in the street.
“Due to the firing from the temple roof and by the police, there was a chaotic situation and one bullet hit my son in his head,” Alam said in his complaint.
Ranchi Deputy Commissioner Chhavi Ranjan confirmed that Mudassir and another man, Sahil Ansari, were later pronounced dead at the Rajendra Institute of Medical Science from “bullet injuries” sustained during the protest.
Ansari’s father, Mohammad Afzal, told CNN his 20-year-old son was returning home from his job selling cellphones in the market when “police opened fire.” 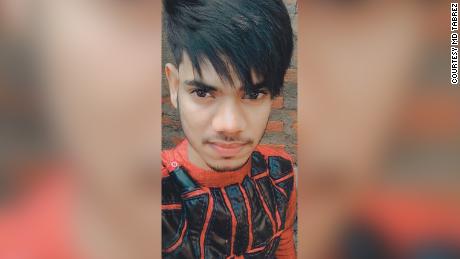 Ranjan said “police opened fire because the mob was violent and initial firing happened from the mob,” but he would not comment on which mob he was referring to, saying the matter was under investigation.
Amol Homkar, Inspector General of Jharkhand Police, said a two-member committee had been formed to investigate the incident, and a Special Investigation Team from the Ranchi Police are also making inquiries. Homkar said 12 people were injured during the protest, and 30 have been arrested in the days since, though he didn’t specify any charges.
CNN has examined footage from the protest, which at times shows police firing indiscriminately at the demonstrators, none of whom — including Mudassir — appear to be carrying firearms.
The boy’s father says he wants answers.
“I lost my only child to this violence,” Alam said. “He was just 15, not even an adult.”

Alam described his son as a “very polite boy” who, like many teenagers his age, loved making TikTok videos and taking photos on his cellphone.
In a report to Ranchi police, filed two days after his son’s death, Alam said he saw a “mob” from the “Muslim community” moving north along the main road, and when they reached Shree Sankat Mochan Hanuman Temple, Mudassir joined them.
Alam claimed the men standing on the temple rooftop started throwing rocks at the protesters and fired shots into the crowd.
Video from inside Shree Sankat Mochan Hanuman Temple, verified by CNN, shows several people sheltering on the ground floor, including police officers.
Over the sound of projectiles hitting the building, a woman’s panicked voice says, “Everyone is throwing stones at the temple. The administration is trying to stop it … but they can’t.” Through the temple’s security screens, protesters can be seen throwing rocks.
#video_cp3{margin:20px 0;}#video_cp3 video,#video_cp3 img{margin: 0; position: relative; width: 100%;}
Another video shows crowds outside, hurling stones towards the temple before gunfire rings out. It’s not clear who’s firing the shots, but the crowd is seen carrying away an unidentified man whose white clothes appear stained with blood.
Towards the end of the video, police with guns are seen walking towards the Muslim protesters, who have retreated from their position outside the temple.
Under India’s Code of Criminal Procedure, police officers can use “force” to disperse what they deem to be an unlawful assembly.
Irfan Ansari, a Muslim legislator from India’s Congress party, which is part of the ruling coalition in the state, questioned why the police fired bullets at the crowd and said that he would demand the Chief Minister order a judicial inquiry.
“The Ranchi incident has put the state to shame,” Ansari wrote on Twitter. “It is the job of the police to protect, not to shoot.”
#video_cp4{margin:20px 0;}#video_cp4 video,#video_cp4 img{margin: 0; position: relative; width: 100%;}

Since Prime Minister Narendra Modi’s BJP party came to power in 2014, Muslims say they’ve been unfairly treated by a government committed to policies favoring Hindus.
India’s Muslim population of 220 million is vastly outnumbered in a country of 1.4 billion people, and while India claims to be a secular country, many Muslims say they’re living in fear.
The recent comments by former BJP representatives about the Prophet Mohammed did not only anger Muslims in India. At least 15 Muslim-majority nations condemned the remarks, and some demanded a diplomatic response from Indian ambassadors.
India’s Minister of External Affairs S. Jaishankar told a town hall held by CNN affiliate News-18 on Saturday that the comments didn’t reflect the BJP’s views.
“What was said was not the position of the party. The party made it very clear and took action,” Jaishankar said.
“Some countries had concerns on it. They deal with us, we are their image of India. Countries who had concerns do appreciate that this was not the government’s position,” he added.
But high-level diplomacy has failed to ease anger on Indian streets, where the comments sparked protests in several major cities. In some places, Muslims say they have been targeted for speaking out. 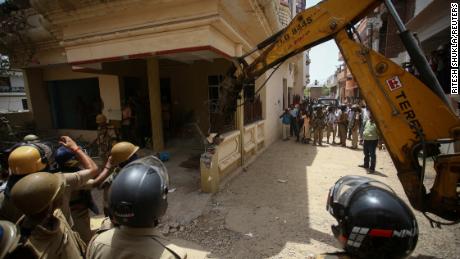 Activists in the northern BJP-ruled state of Uttar Pradesh, ruled by the Hindu priest-turned-politician Yogi Adityanath, accused authorities of punishing Muslims allegedly involved in the protests by destroying their houses.
Authorities defended their actions by saying they were targeting homes built illegally on public land whose owners had ignored repeated demolition notices.
But victims told CNN only Muslim homes had been destroyed, and that no warning was given before their properties were reduced to rubble.
In a statement last week, Amnesty accused the Indian government of “selectively and viciously cracking down on Muslims who dare to speak up and peacefully express their dissent against the discrimination faced by them.” 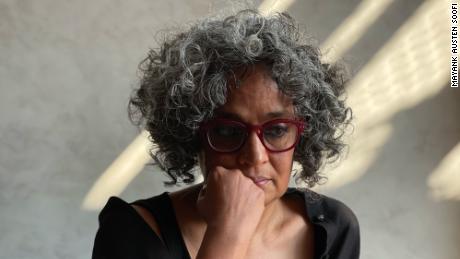 Aakar Patel, Chair of the Amnesty International India Board, told CNN that authorities were “violating Indian law and Indian obligations to various treaties that the country has signed.”
“What India is doing is without the justice process running through it, (it) is targeting Muslims, targeting their homes, shooting them even — all on the pretext of trying to make sure that there is no violence on the street,” he said.
CNN has contacted Adityanath’s office but did not receive a response. In a tweet on June 11, his media adviser shared a photograph on Twitter of a yellow bulldozer demolishing a property, writing: “Remember, every Friday is followed by a Saturday.”

At the family’s modest home in Ranchi last Wednesday, women surrounded Mudassir’s grief-stricken mother, Nikhat Parveen, wiping tears from her eyes as she wailed.
Parveen told CNN Mudassir had phoned her after he finished helping his father to say he was coming home. “He put his phone down, and then he died,” Parveen said.
#mother-holds-picture{margin:20px 0;} #mother-holds-picture video,#mother-holds-picture img{margin: 0; position: relative; width: 100%;} .cap_cp1{-webkit-font-smoothing:antialiased;padding:0 0 5px 5px; font-size:16px; color:#595959;} .cap_cp1:before{content:””;display: block;height: 1px;margin-top: 10px;margin-bottom: 10px;width: 80px;background-color: #C5C5C5;}
She said her son was waiting for his high school exam results, and on Tuesday, they found out he was awarded straight A’s for five of his six Year 10 subjects.
“He used to tell me: ‘I’m going to get a government job. I’m going to go far in life,'” Parveen said.
“He was incredibly intelligent … he was loved by all. He’s not here today, and everyone has tears in their eyes.”
His father, Alam, said police have so far frustrated his efforts to file an FIR — a First Information Report — which is required to start an official investigation.
“We have been trying to take legal action, but the authorities are not cooperating,” he said. “We filed a complaint with the police, but they did not register (it).”
Homkar declined to comment on the claim, and Alam’s other allegations, pending the outcome of the investigation.
Alam said his son’s death has robbed his family of their future.
“I am (a) poor laborer, me and my son (now dead) would sell fruits and vegetables. He was the only son and future of my family,” he wrote in his police complaint.
Mudassir’s mother asked why any shots needed to be fired on a busy street where children, like her son, were present.
“Does anyone have the right to do that? Do the police or whoever else have the right to fire shots like this?”
When asked what she wanted from police, she said with resolve: “I want justice for my son.”

CNN’s Arpit Goel and Teele Rebane contributed to this report.