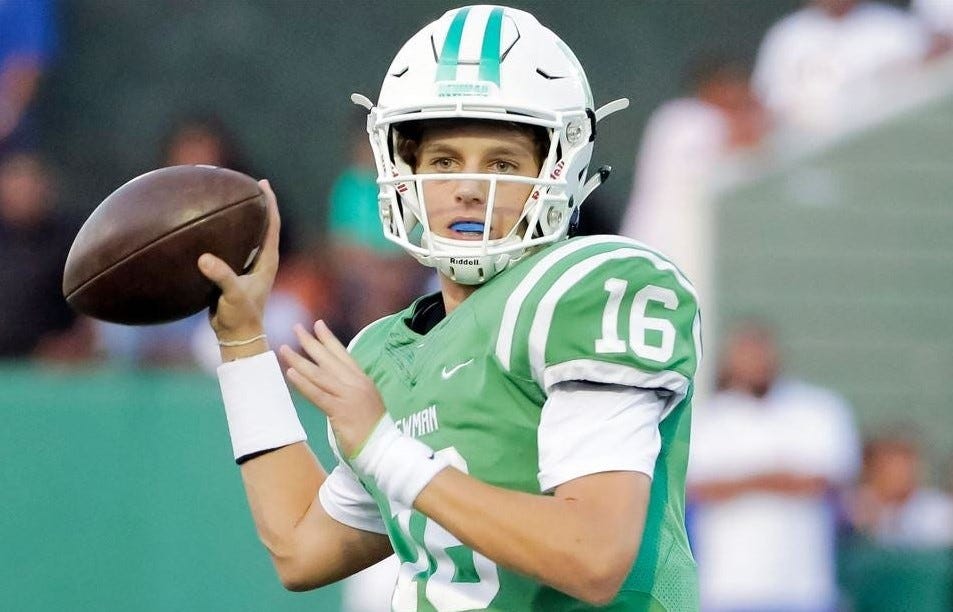 Arch Manning has verbally committed to Texas, the top-ranked quarterback prospect announced on Thursday, ending one of the most highly watched and hotly contested recruitments in recent college football history.

The nephew of former NFL quarterbacks Peyton and Eli Manning, Arch Manning held offers from every major program in the Football Bowl Subdivision before narrowing his list to a handful of elite schools — including Clemson, LSU and more — and trimming his options down to three: Texas, Alabama and Georgia.

Long considered to be a two-team race between the Longhorns and Bulldogs, Texas was given a boost by Manning’s strong relationship with second-year coach Steve Sarkisian.

Ranked as the top overall prospect regardless of position in the 2023 recruiting cycle, Manning has been on the national recruiting radar since early in his high school career at Isidore Newman School in New Orleans. His uncles and father, Cooper, starred at Isidore Newman; Cooper was a highly recruited wide receiver before a spinal injury ended his playing career.

MORE:  Could the next Manning QB be the best?

MORE:  Why Manning is the most sought-after recruit in America

Manning has “one-of-a-kind quarterback pedigree,” according to an evaluation from the recruiting website 247Sports.com, and while facing a lower caliber of competition at Newman his “feel for the game and pedigree will translate regardless.”

His commitment comes after taking visits to each of his three finalists. Alabama seemed to drop out of the running completely after accepting a commitment last month from a quarterback in the 2023 class. In early June, Manning visited Georgia alongside several other highly ranked recruits, many on the offensive side of the ball, and was photographed in a full Georgia uniform.

Manning would be the second five-star commitment to join Texas under Sarkisian. This year’s projected starter, freshman Quinn Ewers, transferred into the program from Ohio State this winter.

With homes of its own, Kansas City Current help set bar in NWSL, women’s sports

Wales prepared for anything on tour in South Africa – Kieran Hardy

With homes of its own, Kansas City Current help set bar in NWSL, women’s sports

Wales prepared for anything on tour in South Africa – Kieran Hardy