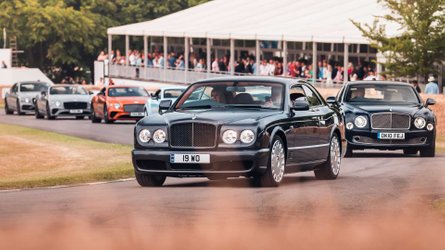 Walk into a Bentley dealer today, and every model you look at has a turbocharged engine. This wasn’t always the case, though. The first modern product from the brand with forced induction was the Mulsanne Turbo in 1982. To mark the 40th anniversary of that launch, Bentley staged a parade of 10 important models at the Goodwood Festival of Speed.

According to Bentley, the idea behind the Mulsanne Turbo was to boost flagging sales. The company’s chief engineer John Hollings came up with the idea of turbocharging the venerable 6.75-liter V8. In the naturally aspirated form, this mill made 198.5 horsepower (148 kilowatts), and switching to forced induction increased the output to 300 hp (224 kW).

The plan to boost interest in the model worked. Bentley collected a nine-month waiting list for the Mulsanne Turbo and built 4,111 of them during the 9-year production run.

Following the Mulsanne Turbo’s arrival in 1982, Bentley launched the Turbo R with an emphasis on improving the big sedan’s handling. The company just kept iterating on the idea from there. The Continental R debuted in 1991 with an engine boosted to 355 hp (265 kW).

The final 6.75-liter-powered Bentley was a special edition Mulsanne in 2020. At this point, the company already had two replacements for it: the 6.0-liter twin-turbocharged W12 and the 4.0-liter twin-turbo V8. More recently, the brand’s hybrid models have adopted a twin-turbo 2.9-liter V6 with electrical assistance.