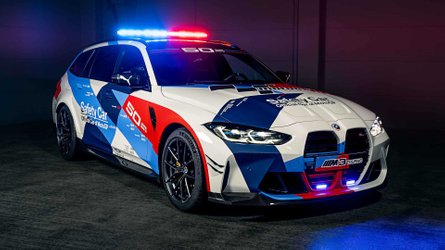 BMW has picked the 2022 Goodwood Festival of Speed as the venue to mark the public debut of its first-ever M3 Touring. Not only that, but the super wagon is joined by the MotoGP Safety Car. Aside from the obvious changes, the belated AMG C63 Estate rival gets an assortment of upgrades from the M Performance catalog. Changes start at the front where there’s a chunky carbon fiber spoiler lip along with a pair of canards on each side of the bumper

However, the most obvious modification is at the back where BMW fitted the optional exhaust system with dual-stacked tips mounted in the center of the bumper. If it looks familiar, it’s because the M3 Sedan has had this setup almost since launch, along with the M4 Coupe. Going for the look-at-me exhaust also changes the carbon fiber diffuser to make the rear nearly as polarizing as the front.

As for the typical MotoGP Safety Car bits, the M3 Touring gets roof lights and front flashers mounted at the bottom of the kidney grille. BMW has yet to provide images of the cabin, but we do know there are body-hugging Recaro front seats with four-point harness, an emergency disconnector, a safety cross beam, and a fuel extraction system.

Decked out in the famous three colors and carrying the old-school BMW Motorsport emblem to celebrate the 50th anniversary of the M division, the MotoGP Safety Car will climb the Goodwood hill together with the regular production model. It will get its first motorsport outing at Silverstone in early August during the British GP.

As far as the regular M3 Touring, BMW will begin to take customer orders from September before pressing the play button on production in November. Sold exclusively as a Competition model with xDrive and an automatic transmission, the first M Touring in more than a decade (M5 E61 was discontinued in 2010) won’t be sold in the United States. Why? Because the standard 3 Series Touring wasn’t homologated there and it would be too expensive and late in the game to do it now.