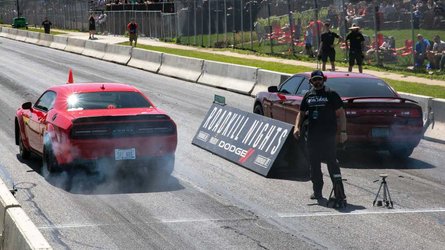 Dodge will present three worldwide product reveals from August 15 through 17 on Woodward Avenue in metro Detroit. The debuts will chart the future of the brand.

Dodge is only giving vague details about the premieres. The announcement on Monday, August 15, will have something to do with its current muscle cars. The one on Tuesday, August 16, will be a “gateway muscle announcement,” according to the company. Finally, Wednesday, August 17, will bring news of a future muscle machine.

“All I can say is the future of our brand will be on display during Dodge Speed Week, and we’re throwing open our garage doors so our fans can get a peek for themselves. It’s going to be an electric summer for Dodge,” said Tim Kuniskis, Dodge brand chief executive officer.

Referring to an “electric summer” is probably a hint about at least one of the vehicles debuting that week. In May, there was a report that Dodge planned to premiere the concept for its future muscle car EV before the Woodward Dream Cruise on August 20. Kuniskis wanted to unveil the vehicle even earlier, but he said there was a factor outside the industry holding things back.

The concept for the electric muscle car is reportedly very similar to the production version that’s coming in 2024. The goal for the vehicle is allegedly to offer a machine that can outperform a Tesla Model S Plaid. This could mean a model capable of accelerating to 60 miles per hour (96 kilometers per hour) in under two seconds is on the way.

Dodge’s teaser for the electric muscle car showed a vehicle that appeared to combine elements from the late 1960s and early ’70s Challenger and Charger. It also revived the old-school fratzog triangular emblem. The car in the clip did an all-wheel-drive burnout, suggesting at least a two-motor setup for the car.

Stellantis, Dodge’s parent company, CEO Carlos Tavares offered a few more details about the electric muscle car. He previously said it had a “sound that you cannot imagine” and is “something that is shocking.”