Nick Kyrgios: I have made some top-10 players look pretty ordinary 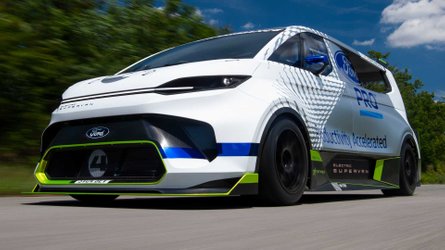 After three iterations, the Ford SuperVan has lost its combustion engine as the latest bonkers van from the Blue Oval is purely electric. Packing no fewer than four motors, the one-off contraption has nearly 2,000 horsepower to achieve a 0 to 62 mph (100 km/h) run in less than two seconds. It was developed in secret by Ford Performance with help from racing specialists STARD while the design was penned by the automaker’s talented team in Cologne.

Feeding those four electric motors is a liquid-cooled battery with a capacity of 50 kWh, which is smaller than the 68-kWh pack of the E-Transit Custom upon which the unique build is based. It’s mounted midship, where the ICEs used to be in the previous three SuperVans. Doing so enables optimal weight distribution and a lower center of gravity. Using a fast charger, the battery’s juice can be replenished in only 45 minutes.

Based on the recently unveiled E-Transit Custom, the SuperVan 4 has a much more aggressive body than the donor vehicle. It has received a comprehensive aero package with a prominent front splitter, muscular side skirts, and a massive rear diffuser. It even has a roof-mounted wing at the back where the unique build uses fully darkened taillights.

Underneath the aggressive body is a reworked suspension with a double-wishbone setup at both front and rear axles. Not only that, but the latest Ford SuperVan even has motorsport-grade front and rear subframes and new brakes borrowed from race cars. Inside, it gets bucket seats and a full roll cage, along with Ford’s latest SYNC 4 infotainment system with a large display.

Speaking of which, the portrait-oriented touchscreen provides access to the five selectable driving modes: Road, Track, Drag, Drift, and Rally. Interestingly, there’s even a humorously called Tire Cleaning Mode. Upon activation, it basically acts like a burnout mode by fully braking one axle while spinning the other. Ford says it’s been added to warm up the tires, but we all know what purpose it serves.

Unveiled today at the 2022 Goodwood Festival of Speed, the Ford SuperVan 4 will be going up the hill with Romain Dumas behind the wheel.