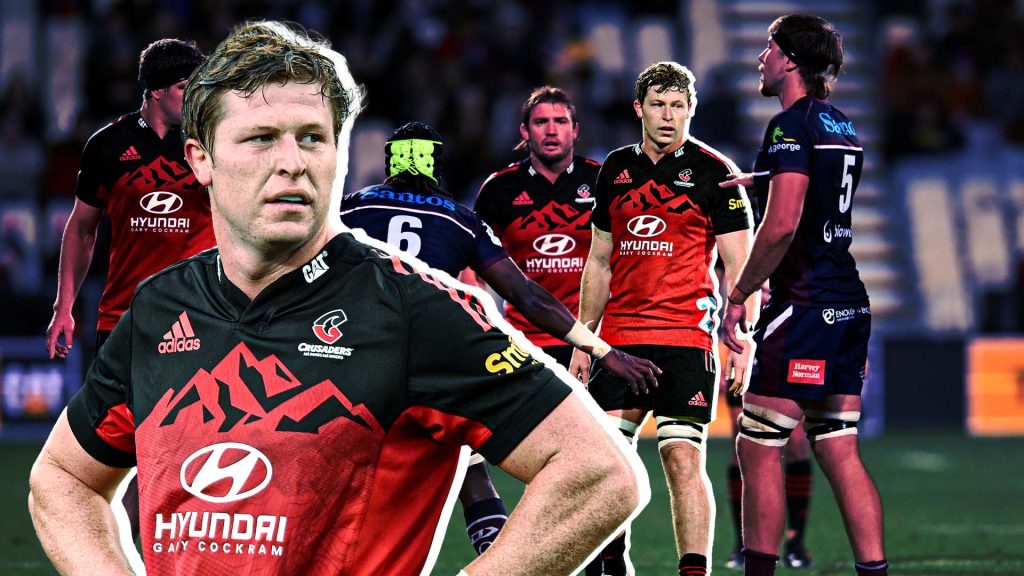 Back in the day, in that decade of great New Zealand teams coached by Sir Graham Henry and Sir Steve Hansen between 2007 and 2017, there was always a solid and aggressive foundation up front.

The All Blacks knew that they would not be able to bully too many of their opponents at the scrum, so they poured most of their creative energy into the lineout instead. In that area, they built their game steadily until they became truly outstanding, regularly winning 90 per cent of their own throw while pinching 25 per cent of the opponent’s.

Their success was based around a holy trinity of two second rows, Brodie Retallick and Sam Whitelock, and a spring-heeled number 8 forward in Kieran Read. The lineout captaincy rested very comfortably in the hands of the skipper, and that was highly unusual. Typically, the lineout calling chores are handled by a second row, and the lineout captaincy did indeed devolve to Whitelock after Read’s retirement from the international game.

But Kieran Read has never been satisfactorily replaced as the primary back-row lineout receiver in the All Blacks, and New Zealand has been the worse for his absence. The recent Super Rugby Pacific final hinted at how the All Blacks may be able to regain some of their former glory.

The Blues lost ten of their own throws to a Crusaders lineout containing two test-quality second rows (Whitelock and Scott Barrett) and the best young back row jumper in Aotearoa, number 8 Cullen Grace. At only 22 years of age, Grace has plenty of room to grow his game further, both physically and technically.

The presence of three big men who can work together in unison at lineout time is a ‘must’ in the modern game. As long ago as June 2020, Crusaders’ head coach Scott Robertson was already seeing the similarities between Kieran Read and his new protegé:

“When you’ve got hops like Cullen Grace. I’ve mentioned before, that Kieran Read spring. He hardly jumps but look at him. He’s got a special bit of timing in him.”

When you can find those three big men, and create a web of offensive and defensive variations around them, it means easy ball from the major attacking set-piece for you, and trouble for your opponents on their throw.

Crusaders’ skipper Scott Barrett explained the lineout-targeted effort the forwards had made in their preparation for the final:

“Finals footy is a game about pressure and that’s something we talked about this week. If we could pressure their set-piece at the lineout, we saw a few opportunities there if we could just get up in the air, [with] greasy ball, we could accumulate some pressure and we did that pretty well.

“I think we had a clear plan. We put a lot of time into it, meeting on the day off and throwing out ideas with [injured second row] Quinten Strange and [forwards coach] Jason Ryan behind the scenes and putting a lot of work into that. We got the reward tonight, which was pleasing.”

Let’s start with the basics of winning your own ball with minimum fuss or interference by the opposition.

Firstly, three big men align in the centre of the line together – Barrett nearest the front, Whitelock at the back, with Cullen Grace as the meat in the middle. That gives maximum flexibility, because any one of the three can be the receiver and the players with the greatest lifting range are all to be found in the same area.

Next, your lineout captain highlights the gap that needs by law to be present between the two sets of players, before making a clearly audible call. Finally, you establish that your third receiver will be a productive source of possession: 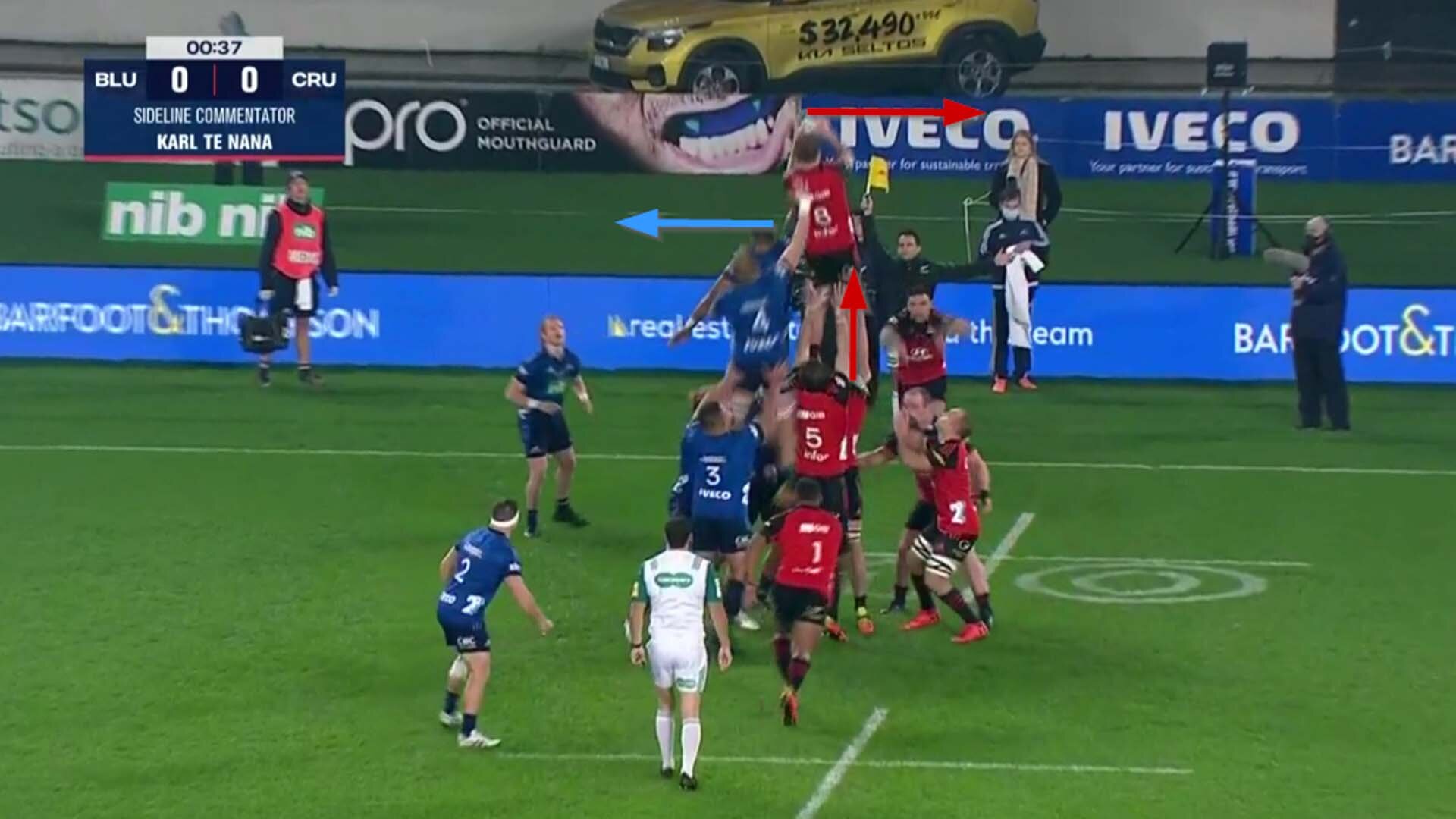 Grace’s ‘hops’ – his quick elevation into the air – take him well clear of a double counter-jump by Josh Goodhue and Akira Ioane. He is miles ahead of the competition even though his arms are nowhere near a full extension.

In the following example, Grace is at full stretch and there is no way the Blues can get anywhere near him in the air:

Cullen Grace is what is known as an ‘easy lift’ – it is easy for his two boosters (Whitelock and Barrett) to jack him up off the ground. Some lineout players have the requisite height and reach but they are ‘heavy lifts’. They tend to obey the law of gravity more quickly, and are harder to support in the air.

The Crusaders’ maul dutifully shunts forward far enough to draw a penalty from referee Ben O’Keefe, though Richie Mo’unga decided not to waste any more time by knocking over the drop-goal instead.

But it was on the defensive side of the throw that the Crusaders did most of the damage. They began by mounting intense pressure on the Blues’ five-man lineout, which most professional teams will employ in their own exit zone. The formation is exactly the same, with Grace sandwiched in between Whitelock and Barrett in the middle of the line:

This was a role in which Kieran Read excelled for the All Blacks, as the ‘reader’ responsible for anticipating whether the delivery will go the front, in which case he will back-lift for Scott Barrett; to the tail, with a pivot and front-boost for Sam Whitelock; or over the top of him directly, which will draw the counter-jump. Read was so infernally good at his job that it often needed multiple decoys to pull him away from the intended target.

In this instance, Grace reads off Tom Robinson’s movement and launches the Barrett rocket at the front successfully. In the course of the game, Blues’ caller Josh Goodhue was quite incapable of painting a picture attractive enough to pull Grace away from Robinson, and that was an individual contest the Blues were never going to win:

Goodhue never had the confidence to take on Whitelock at the back of the line, and Grace ate up all of the throw sent his way in the front half. The five-man line became a no-go area which prompted Blues coach Leon MacDonald to comment after the game:

“They got up like they had our playbook. They were reading our plays and causing a lot of trouble there.

“We tried variations and we just weren’t able to get quality ball to launch off … 10 missed lineouts is hard to live off. It’s as simple as that really.”

The scenario in the longer six-man or seven-man lineouts was slightly different, even if the outcomes were largely the same:

On this occasion, it is Whitelock turning to lift for Pablo Matera at the tail of the line, and it is the read which causes the steal. That enabled the Crusaders to use their kicking game to full effect, with David Havili finding the corner of the 22-metre line and touch for the 50:22 turnover throw to the next lineout. Leicester Fainga’anuku scored a ‘try’ (improbably disallowed on review) from the sequence that followed at 15:25 on the game clock. Lost lineouts have some severe and long-lasting repercussions.

Whitelock intimidated his old comrade-in-arms Luke Romano every bit as much when Romano came off the bench to take over the calling from Goodhue early in the second half: 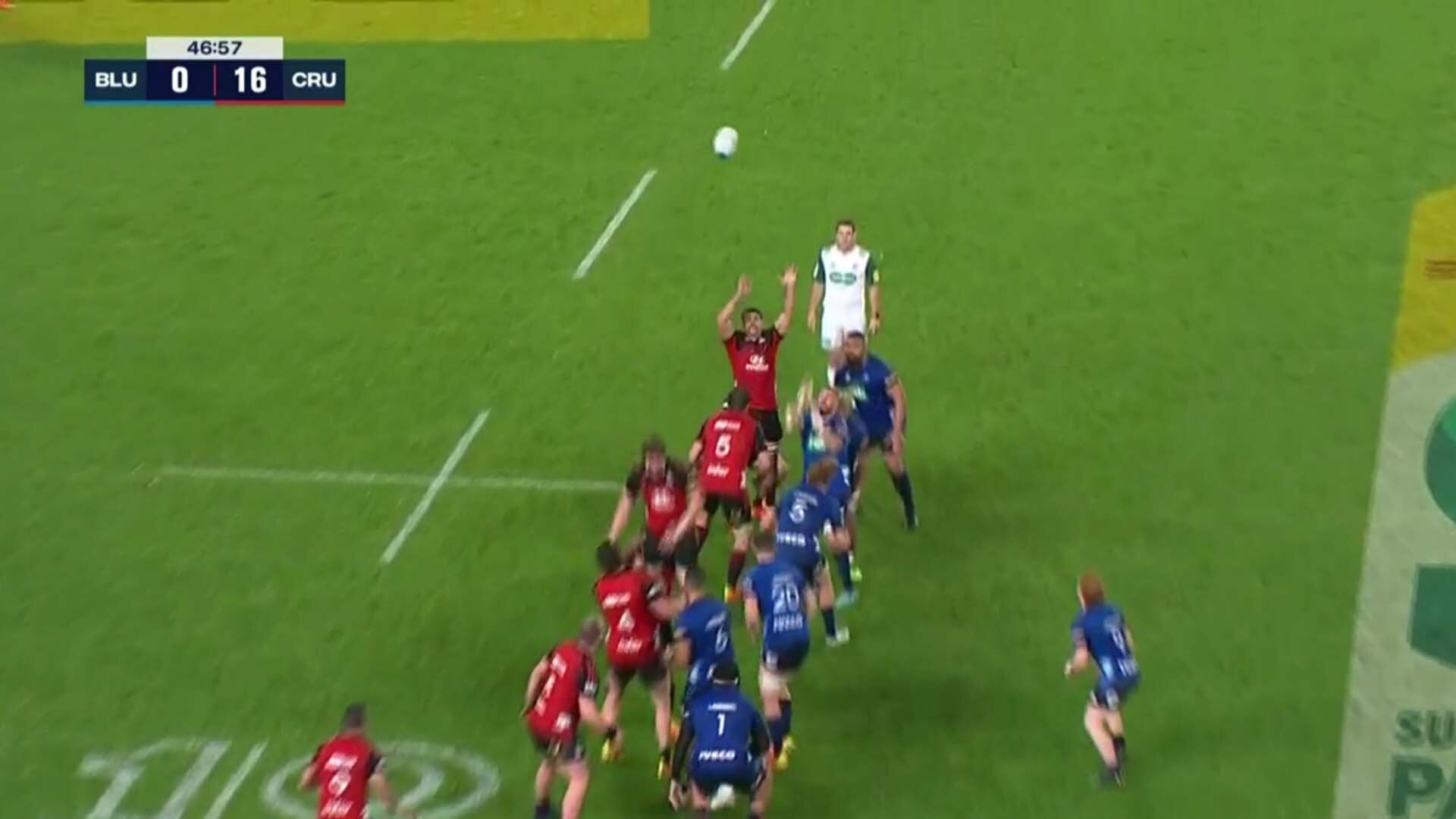 From that screenshot, you would be fully entitled to believe that it was a Crusaders’ delivery, or else that they had complete access to the Blues’ playbook. The red-and-black pod is set and launch has occurred, their opponents are still struggling to get off the deck.

If you cannot win ball from the back half of the line, it is much harder to launch constructive attacks from the set-piece. The Blues tried avoiding the lineout altogether, with hooker Kurt Eklund throwing right over the top to Roger Tuivasa-Sheck in midfield:

Even when they accepted less useful ball from the front, the pressure produced a domino effect on the subsequent phase of play:

There is only one player doing the organising and the ‘calling’ in this lineout, and it is Sam Whitelock on defence. His body language is aggressive to the point of being predatory, with lots of finger-pointing.

He is dominating the space in mid-line, and Josh Goodhue enters the fray with the greatest of reluctance, only to leave it again as Eklund prepares to make his throw.

At the critical moment, big Sam has Hoskins Sotutu locked up by Matera in a pod at the back, and Tom Robinson locked up directly opposite him in the middle: 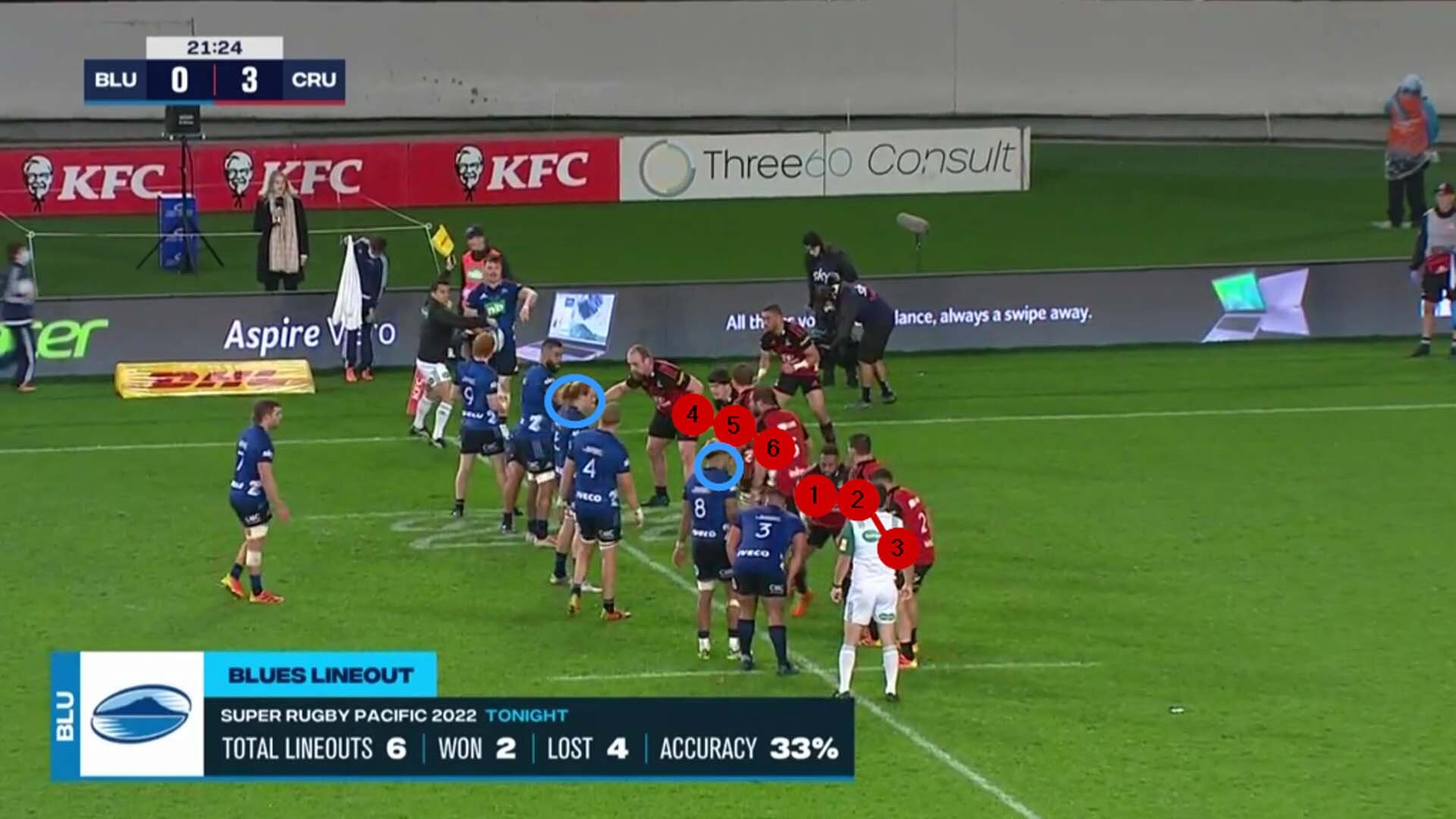 That only leaves an open ball on the 5-metre line, and Blues number 7 Adrian Choat is promptly robbed of the ball at the first ruck by – you guessed it – Sam Whitelock. The Crusaders’ pirate-in-chief had woven his web, dictated where the opposition would make its play, and arrived first to turn the ball over at the same spot. That is a true lineout captain’s work for you.

The Super Rugby Pacific final of 2022 illustrated the value of an aggressive, well-constructed defensive lineout as definitively as any match in recent memory, played in either hemisphere. If you lose ten of your own throws, you are entitled to feel that the opposition has stolen your playbook, and has your number.

It was also a sharp reminder to New Zealand rugby as a whole of the importance of having a true cutting edge at set-piece: that the winning of the ball can provide a more robust platform for domination in test matches than the using of it. The Crusaders spent large portions of the game in and around the opposition 22, and the Blues were slowly suffocated without the oxygen of territory and possession.

It was a throwback to the days of the great All Blacks sides of the previous decade, which featured two great lineout receivers in the second row and a seriously spring-heeled number 8 in the form of captain Kieran Read. With those three in harness, the All Blacks could dictate terms on a dank, wet day in Dublin or Twickenham.

New Zealand has had nobody of Read’s quality in the lineout since the great Canterbury man retired after the 2019 World Cup. That may be about to change with the arrival of Cullen Grace at number 8. Grace is only 22 years old and seems to have plenty of scope to develop, and he is a proper reader/receiver on both sides of the ball.

The series against Ireland may have come too soon, but the Rugby Championship later in the year looks like an ideal opportunity to test whether he can bring life back into the All Blacks game at set-piece. If that is a throwback to the good old days, it may well be one that Kiwi supporters enjoy, without reservation.