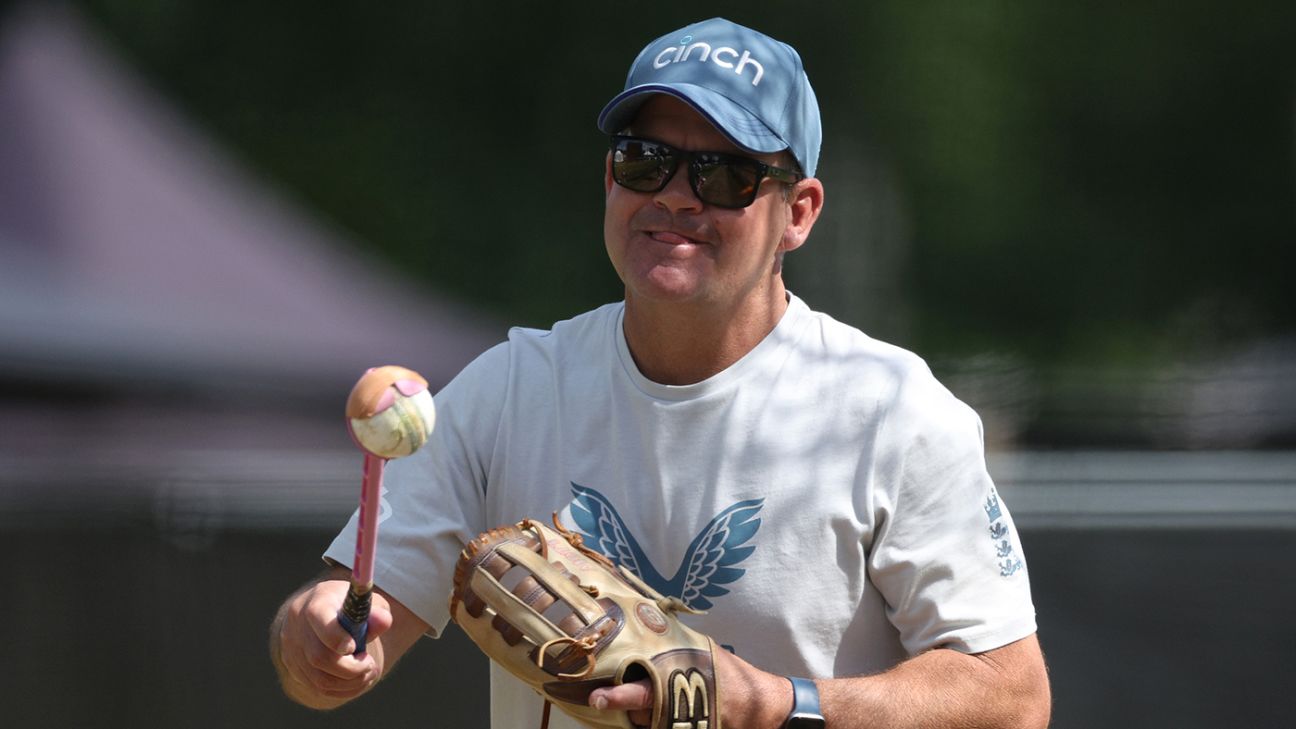 England’s new coaching structure will hold face-to-face meetings next week to work out how to manage multi-format players’ workloads during a schedule of 12 limited-overs internationals in 25 days.

Matthew Mott‘s white-ball side will play three ODIs and three T20Is against both India and South Africa between July 7 and 31, a window which starts two days after the scheduled fifth day of the one-off Test against India at Edgbaston.
Rob Key, England’s managing director, has openly stated that he sees Test cricket as the top priority this summer but with a T20 World Cup looming in October, Mott is keen to strike a balance between testing depth and getting his best team on the pitch together.
Brendon McCullum‘s desire to integrate leading white-ball players into his Test side may further complicate matters, though the immediate focus will be on Jonny Bairstow, Sam Curran, Joe Root, Chris Woakes and Mark Wood, with Ben Stokes not expected to be involved in limited-overs cricket this summer.

“We’ve got some meetings next week and we’ll know a little bit more then,” Mott said after England’s clean sweep in their ODI series against Netherlands in Amstelveen. “I haven’t had a chance to sit down with Brendon and Rob and the rest of the selectors.

“Once we get the opportunity to map out the little jigsaw puzzles that are going to be part of this going forward… we’ve all come in at pretty much the same time, so we’re all open to getting the best way to work through things and getting face-to-face next week will be really important for that.”

With the Netherlands tour squeezed in between the second and third New Zealand Tests, England gave opportunities to a handful of young players, most notably Phil Salt, who finished the series as its joint-highest run-scorer, and Brydon Carse, who impressed while auditioning for the ‘enforcer’ role once filled by Liam Plunkett.

“The more opportunities you can give to players that far out from World Cups is absolute gold and you can’t miss that,” Mott said. “Whoever gets that opportunity, you want them to step up and they all have.”

Mott is already expecting Eoin Morgan, his captain, to miss at least two of England’s dozen fixtures: Morgan has already signalled his reluctance to play back-to-back games amid concerns about his fitness and England play on consecutive days in both of their T20I series.

Morgan’s consecutive ducks in Amstelveen last week preceded a recurrence of a recent groin strain, which caused him to sit out of the third ODI, leading the scrutiny over his position to mount. Mott was quick to defend him, describing him as “an inspirational leader” and suggested that missing Wednesday’s game could “light the fire” ahead of a busy July.

“He’d love more runs: most batters do,” Mott said. “Over 200 games he’s been a very, very good player and I don’t think that’s going to change. Of course, he’d love to get some runs and there’s some opportunities coming up. Having sat out this game, I’m sure that will light the fire a little bit for him for the huge summer ahead.

“We’ve already developed a great rapport. We caught up for a lovely lunch the other day in London and we share a lot of the same ideas: we both put the team at the forefront of our minds and work out how we get the best out of individuals to work as a team. He empowers others and believes in others. That really becomes obvious and I think the players thrive off that. They know he’s got their back.”

“I haven’t had any conversations with anyone about that,” he said. “I’m very happy with where I’m at… it might not ever be a question that has to be answered.”

Buttler batted at No. 4 in both of his innings in Amstelveen, finishing the series with 248 unbeaten runs off 134 balls including 19 sixes, and Mott said that he expects to use him in a floating role in 50-over cricket going forwards.

“The way we set up, he’s listed at No. 5 but chatting to Morgs, there’s always a chance he’ll go up higher,” Mott said. “He’s the one player in the squad who is probably capable of batting anywhere and we’ll just assess the conditions and the match as to exactly where he bats in the order.

“He’s special. He just brings something that’s very unique: the ability to hit the ball [for boundaries] off relatively good balls is something special. I thought at times the Netherlands bowlers really stuck to their task well but were still up against someone who was in a rich vein of form and has done that to a lot of the best bowlers around the world.”

Matt Roller is an assistant editor at ESPNcricinfo. @mroller98