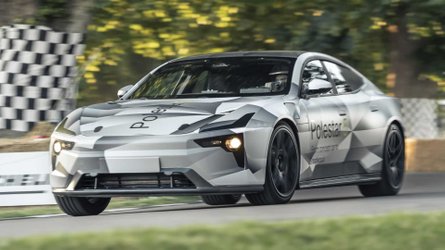 It was early 2020 when Polestar announced its intentions to develop a Porsche Taycan fighter by introducing the Precept concept. Volvo’s electric spin-off has now unveiled a prototype of the performance EV on the occasion of the 2022 Goodwood Festival of Speed. The Polestar 5 won’t go into production until 2025, hence why this car is still fully camouflaged. It also has provisional lights, which explains why it’s equipped with good ol’ halogens.

If the leaked patent images are any indication, and they should be, hiding underneath the disguise should be a car with largely the same design as the Precept. We can’t help but notice the prototype’s rear window is camouflaged as well. The reason we’re bringing this up is that the concept and the car in the patent images lacked the rear glass. It’s too early to say whether the final Polestar 5 will do without it, therefore making the driver rely solely on the camera.

While the Polestar 5 is still a work in progress, the company is eager to announce there will be a range-topping version with a potent dual-motor setup. The engineers are targeting a whopping 884 horsepower (650 kilowatts) and 900 Newton-meters (664 pound-feet) of torque.

We’re being told the follow-up to the Precept will benefit from an 800V architecture and that it will combine the sophistication of a grand tourer with the performance of a sports car. Of course, weight is going to be a concern considering this is going to be a big car with two electric motors and a beefy 103-kWh battery pack.

See also  Bizarre Stunt Sees Woman Exit Her Car In The Middle Of The Road, Lets It Roll Into Oncoming Traffic

Look for the Polestar 5 to be officially revealed by the end of 2023 with conventional rear doors, smaller wheels, and side mirrors as opposed to the Precept’s typical concept car traits. The sporty EV will join the Polestar 3 and 4 taking the shape of more volume-oriented SUVs to go after the likes of the electric Porsche Macan and Audi Q6 E-Tron.