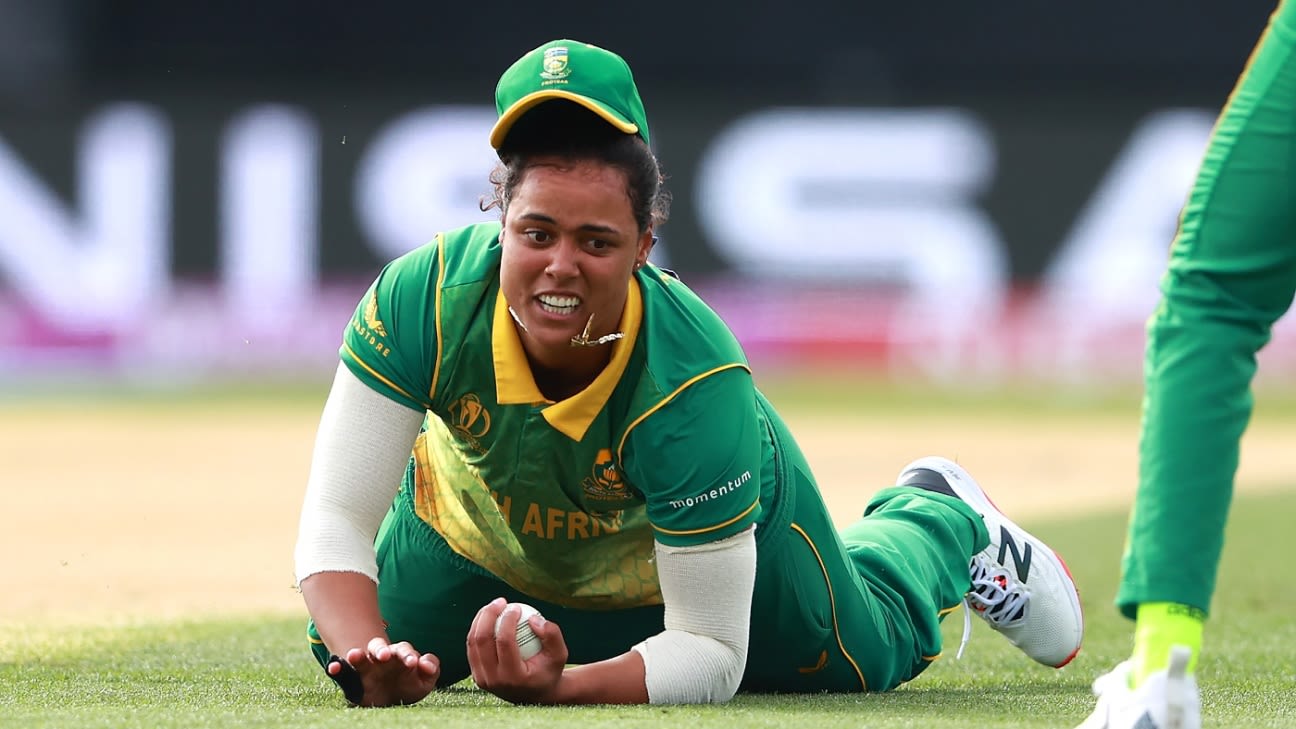 South Africa will need to develop a patience game with both bat and ball as they embark on their first Test in eight years when they take on England in Taunton next week. That’s the assessment of vice-captain Chloe Tryon, one of only five members of the current squad to have played a Test before.

While recognising that they are coming up against a vastly more experienced side – England have played 97 Tests compared to South Africa’s 12, and three in the last three years – Tryon is hopeful South Africa will be able to apply themselves over long periods of time to compete in this encounter.

“Our concentration has to be a bit higher [than usual] because it’s a really big mental game,” Tryon told ESPNcricinfo. “We’ve got to be able to bat for longer, with the ball, you’ve got to be okay with bowling the same length all the time and as a fielding side, we also have to be really awake. When an opportunity comes and when you are playing a team like England, you can’t drop world-class players and then they go on to make hundreds. It’s important to be really switched on, and for us to use this opportunity for girls to make big scores and take plenty of wickets”.

The dearth of Tests in women’s cricket – no team other than England, India or Australia have competed in Tests since 2015 – means that South Africa don’t have a lot of historical knowledge to go on. Tryon, Lizelle Lee and Marizanne Kapp played in the 2014 Test against India in Mysore, which South Africa lost by an innings and 34 runs.

“India batted for about two days and we just tried to survive,” Tryon said of that match. “It was a really good memory because I always wanted to play a Test match.”

See also  Pujara: If we can win at Edgbaston, it will be one of India's best wins
Still, she called it a “different and weird” experience but one she is “excited” to try again. Other than the trio, Shabnim Ismail was part of South Africa’s previous Test, seven years earlier, against Netherlands in 2007, while Trisha Chetty is the only member of the current squad to have played in both those matches.
South Africa’s domestic set-up does not include a red-ball programme for women, or any multi-innings or time cricket matches, which means that none of these five players have played any competitive long-format cricket since their respective last Tests while the rest have never played anything other than limited-overs cricket. That means South Africa will have to field at least six debutants against England next week, and all of their squad have almost no red-ball experience other than the occasional match at school.

“As players, the game has evolved and we want to grow it as much as we can. While ODI and T20I cricket is growing, we should also be able to grow the Test matches. It can be an exciting way for us to develop.”

Still, Tryon believes they have had as much preparation as possible with intra-squad matches at a training camp in Pretoria last month, though those who were part of the FairBreak Tournament, like Ayabonga Khaka and Laura Wolvaardt, had to miss it. A three-day warm-up match against England A at Arundel is ongoing. From the latter, South Africa have an example of how to approach Test cricket in Wolvaardt, who scored a century in the first innings against England A, and Tryon expects big things from the top-order batter. “Laura has adapted really well to the situation,” she said. “It looks like she is enjoying it and the rest of the batters are taking up the roles.”

Given the lack of familiarity in the format, does Tryon think South Africa’s participation could be farcical? It seems not. “As players, the game has evolved and we want to grow it as much as we can. While ODI and T20I cricket is growing, we should also be able to grow the Test matches. It can be an exciting way for us to develop.”

However, not even the most important decision-makers in the game think so. In an interview with BBC’s Test Match Special earlier this month, ICC chair Greg Barclay said he didn’t see women’s Tests “being any part of the landscape moving forward to any real extent at all,” and cited lack of resources and structures in most countries and the push for white-ball cricket to be the future as justification for his views.

England’s coach Lisa Keightley was disappointed with that analysis and England’s captain Heather Knight also came out in support of long-format cricket, and now Tryon has added her voice to the discussion as well. “I’ve always been a person that’s loved Test cricket. I grew up watching Test cricket and I love Test cricket now,” she said. “It would be great for us to be able to play a few more Tests.”