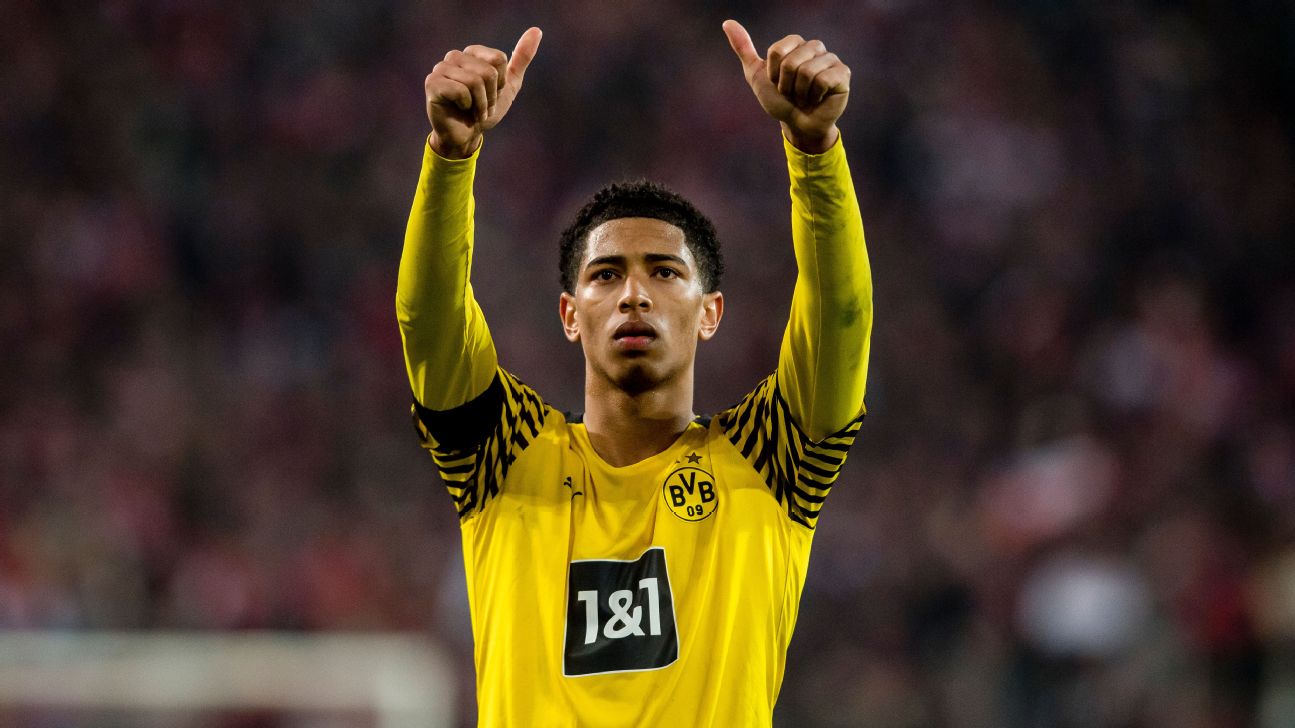 Liverpool will be looking to add to their midfield options in the next 12 months and are confident of landing Borussia Dortmund‘s Jude Bellingham ahead of Manchester United and City, says The Sun.

Bellingham, 18, is one of the best young players in the world and has every major club in Europe on his trail, with Real Madrid reportedly also keen.

Dortmund were forced to let star striker Erling Haaland move to City for his €60 million release clause this summer, so won’t want to lose Bellingham as well, with the England midfielder valued at over €120m.

City boss Pep Guardiola has agreed a deal to sign Leeds‘ Kalvin Phillips for €50m, while Man United are reportedly closing on an €80m move for Barcelona‘s Frenkie de Jong, which could leave the way clear for Liverpool to land Bellingham next summer.

12.02 BST: AS says that Neymar’s agents have opened talks with Juventus over a transfer from Paris Saint-Germain.

Neymar, 30, has a contract until 2026 but sources told ESPN that PSG are willing to let the Brazil international forward move on.

He has been keen on a return to Barcelona, but the club are financially unable to make that happen, so Juve might be open to bringing him in alongside Paul Pogba and potentially Angel Di Maria.

11.16 BST: Sources have told ESPN that Manchester United manager Erik ten Hag and football director John Murtough have switched their transfer focus from a striker to a more versatile forward after missing out on Darwin Nunez, who has joined Liverpool from Benfica.

Ajax winger Antony is one of the targets but although the Brazilian is keen to join, Ajax’s valuation of €80m is proving problematic.

United’s priority this summer remains to sign a central midfielder with talks progressing with Barcelona over a move for Frenkie de Jong. Sources have told ESPN that there is a belief on both sides that an agreement is close and there is hope De Jong could still be part of the squad which leaves for a tour of Thailand and Australia on July 8.

United are also expecting a decision from Brentford’s Christian Eriksen about where he will play next season as he is available on a free transfer.

10.45 BST: Manchester United have told Cristiano Ronaldo he is not available for transfer this summer despite the Portugal forward’s representatives assessing interest from some of Europe’s top clubs, sources have told ESPN.

Ronaldo has been linked with moves to Chelsea, Bayern Munich, Real Madrid and Paris Saint-Germain but sources close to United insist they “want and expect” the 37-year-old to remain at the club next season.

He has a year left on his contract at Old Trafford with the option of another season. Ronaldo scored 24 goals in all competitions last season but could not prevent United from missing out on qualification for the Champions League after finishing sixth in the Premier League.

Sources have told ESPN that Ronaldo is keen to spend the remaining years of his career playing in the Champions League and has doubts about United’s ambitions after failing to make a signing so far this summer.

However, new manager Erik ten Hag, who is set to lead his first day of preseason training at Carrington on Monday, is banking on having Ronaldo in his squad next season.

Rice, 23, is considered one of the best defensive midfielders in Europe but the Hammers value his services at over £150m.

Chelsea’s new owners are reportedly keen to bring in Rice — going as far as to offer striker Armando Broja and midfielder Ross Barkley as part of a swap deal — but West Ham will not budge given his contract doesn’t expire until 2024 (and they have another year’s option to extend it as well.)

08.54 BST: Manchester City and Arsenal have agreed terms over the transfer of Gabriel Jesus on Saturday, sources have told ESPN.

Arsenal will pay £45m plus a further £10m in add-ons for the Brazil international striker with only paperwork and a medical standing in the way of a deal being completed.

The Gunners had already agreed a five-year contract with Jesus.

08.30 BST: Wales star Gareth Bale has confirmed he will be heading to LAFC in Major League Soccer, sharing a video Saturday posing in the club’s gear.

Bale’s tweet, in which he also wrote “See you soon, Los Angeles,” was shared by LAFC.

The blockbuster move would be a free transfer as Bale’s contract is up with Real Madrid. Sources confirmed to ESPN that the deal is expected to be completed using targeted allocation money (TAM), as first reported by MLSSoccer.com, leaving the club with an open designated player slot.

He would be eligible to play for LAFC when the MLS transfer window opens July 7, meaning he could first feature against rival Los Angeles Galaxy at home the following day.

– Chelsea discussed the possibility of signing Cristiano Ronaldo with Jorge Mendes last week, reports the Athletic. It is understood that new co-owner Todd Boehly is interested in the potential of making him his first signing, though it isn’t clear whether the 37-year-old Portugal international striker would be open to a Stamford Bridge switch, due to his affinity to Manchester United. Ronaldo has just 12 months left on his deal at Old Trafford, and has been linked with an exit in recent weeks. However, The Daily Mirror reports that United are furious about the reports and insist that Ronaldo won’t be leaving.

– Arsenal are planning a fresh approach for Leeds United winger Raphinha after agreeing to a fee with Manchester City for Gabriel Jesus, reports the Express. The Gunners have set their sights on the 25-year-old winger for their next move of the summer transfer market, having been reported to have had a bid of £50m turned down on Wednesday.

– Paris Saint-Germain are close to reaching a full agreement over a new contract with Xavi Simons, according to Fabrizio Romano. The 19-year-old midfielder’s future has been left uncertain over the last season, with speculation linking Barcelona with his services, but it now looks as though has committed his future to Parc des Princes. It is reported that he will sign a new contract before being loaned out to PSV Eindhoven.

– Manchester United are nearing full agreement with Barcelona for midfielder Frenkie De Jong, reveals Sport. It is understood that a transfer fee of around €80m is being discussed, with the deal now believed to be on track. The Red Devils are confident that the deal could be secured before the end of June, though they do still require to agree to personal terms with the 25-year-old once an official bid has been accepted.

– Barcelona have no plans to offer Ousmane Dembele improved terms before his contract expires at the end of the month, writes Goal. Despite talks continuing in recent weeks between the Blaugrana and the 25-year-old winger, it looks as though he will part ways from the club unless he accepts the package that he has been offered. Dembele has also been linked with Chelsea, but more interest could spark once he officially becomes a free agent on June 30.

– Talks between Internazionale and Paris Saint-Germain are set to continue in the coming weeks over the signature of centre-back Milan Skriniar, according to Calciomercato. The Serie A side are willing to allow the 27-year-old to make the switch from San Siro to the Parc des Princes, but only for the right fee. It is expected that PSG will soon return with an improved offer, with the Nerazzurri looking for an amount in the region of €80m.