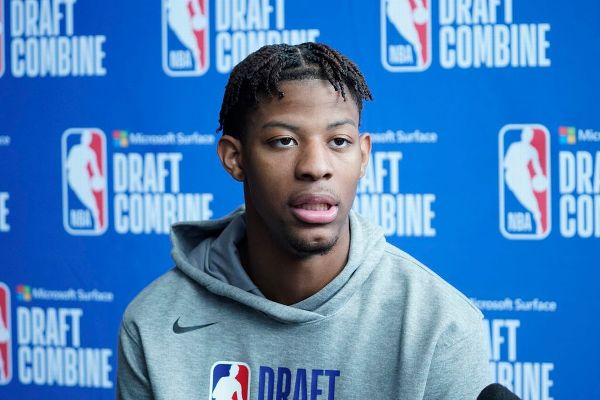 CHICAGO — Chicago Bulls rookie Dalen Terry will wear jersey No. 25 during the season as a tribute to a pair of influences to his basketball career — Chicago high school legend Benji Wilson and current Golden State Warriors coach Steve Kerr.

Terry, who the Bulls selected No.18 overall in last week’s NBA draft, wore No. 4 in college at Arizona, but that number was retired in Chicago for the late-Jerry Sloan. So, Terry pivoted to No. 25, which Wilson wore at Simeon High School before he was shot and killed at age 17, and Kerr wore both while playing at Arizona and during his playing career with the Bulls.

“Just paying homage to those two guys,” Terry said in a video posted to the Bulls’ Twitter account. “When they asked me what I wanted, because obviously, I couldn’t pick number 4, it was like, yeah, let’s go with 25.”

2️⃣5️⃣@DalenTerry is honoring some Chicago hoops legends with his jersey number. pic.twitter.com/pywFxS8N0O

Terry grew up in Phoenix, but the No. 25 also has ties to a fellow Wildcat in Kerr, who also played for the Bulls and helped the franchise win three championships from 1996-98.

But Terry said he was just a kid when he first heard stories of Wilson, who died in Nov. 1984, from his uncle, who played on the same basketball team as Wilson in high school.

Terry is the latest in a line of athletes who have honored Wilson’s legacy by donning the No. 25 jersey in college or the pros, a list that includes Nick Anderson, Juwan Howard, Kendrick Nunn and Derrick Rose — who wore the number in high school at Simeon and again for the New York Knicks.

See also  Ben Simmons left Nets group chat after being asked if he was playing vs. Boston

“I know after he passed away, a lot of guys wore 25 at Simeon,” Terry said. “My uncle played with Benji and he was one of his best friends. He told me the story when I was, like, 10 years old. It really moved me.”