Pick up trucks have never been very successful in India. Isuzu however changed that with the launch of their V-Cross pick up truck in India. The 4×4 pick up truck became popular among SUV buyers and off-road enthusiasts. As V-Cross is an international model, there were several accessories available for the SUV. There are several body kits and accessories available for Isuzu V-Cross that enhance the overall look and also the capabilities of the vehicle. Isuzu V-Cross is a huge vehicle and has an intimidating look on the road. We have seen several tastefully modified the Isuzu V-Cross in India. Here we have one such V-Cross that gets a 5-inch lift kit installed.

The video has been installed by All in One Entertainment on their YouTube channel. In this video, the vlogger shows a modified Isuzu V-Cross pick-up truck that had come to a car wash station. Several modifications were made to the Isuzu. Starting with the front, the original front grille has been modified and an LED light bar is placed in front of it. The original bumper of the Isuzu V-Cross has been modified as well. It now comes with a custom made off-road bumper with LED DRLs integrated on them. The new bumper gives the SUV a monster truck like aggressive look.

Also read: Mahindra XUV700 Getaway: What it could look like (Video)

The main attraction on this Isuzu V-Cross is the height itself. In comparison to a regular V-Cross, this one looks a lot more taller. The reason behind this is the lift kit that is installed in the car. The Isuzu V-Cross gets a 5 inch lift kit installed on the car. The car comes with 17 inch aftermarket alloy wheels installed. The 5 inch lift kit has increased the ground clearance and even the 17 inch wheels are looking small on this pick-up truck. There are metal foot steps installed on this V-Cross for better ingress and egress. A metal bumper has been installed at the rear as well.

See also  Tesla Sees Its Rivals’ EV Goals And Sets One Of Its Own: 2 Million Cars Per Year By The End Of 2022 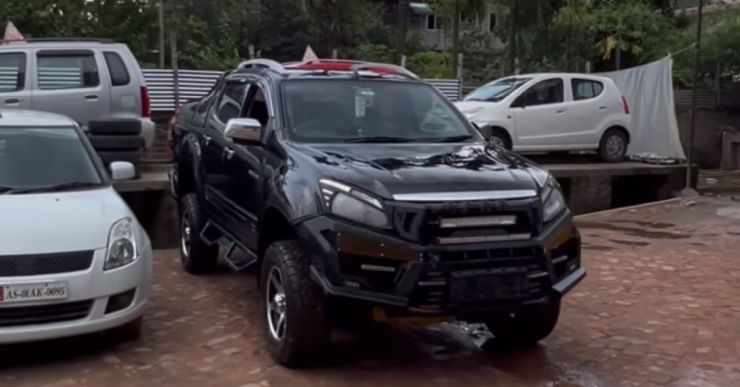 The owner of this V-Cross has installed a lift kit from the brand Overland. Isuzu V-Cross is a capable off-roader and we have seen several videos proving the same. The suspension setup on the V-Cross is very soft and that helps a lot in wheel articulation while off-roading. As the suspension is tuned to the softer side, the body roll will be very evident in the V-Cross. This would have increased after installing the lift kit. The Isuzu V-Cross seen here is the pre-facelift model. Last year, Isuzu launched an updated version of the Isuzu V-Cross in India. The Isuzu V-Cross was the only pick-up truck in the segment when launched but now, there is Toyota Hilux on offer as well.

The Isuzu V-Cross BS6 version is offered with a 1.9 litre turbocharged diesel engine that generates 163 Ps and 360 Nm of peak torque. It is available with both manual and automatic transmission option. Toyota Hilux is again an international model from the Japanese car maker. The Hilux is available with 4×4 as standard and it uses the same diesel engine as Fortuner. It also comes with manual and automatic transmission option.