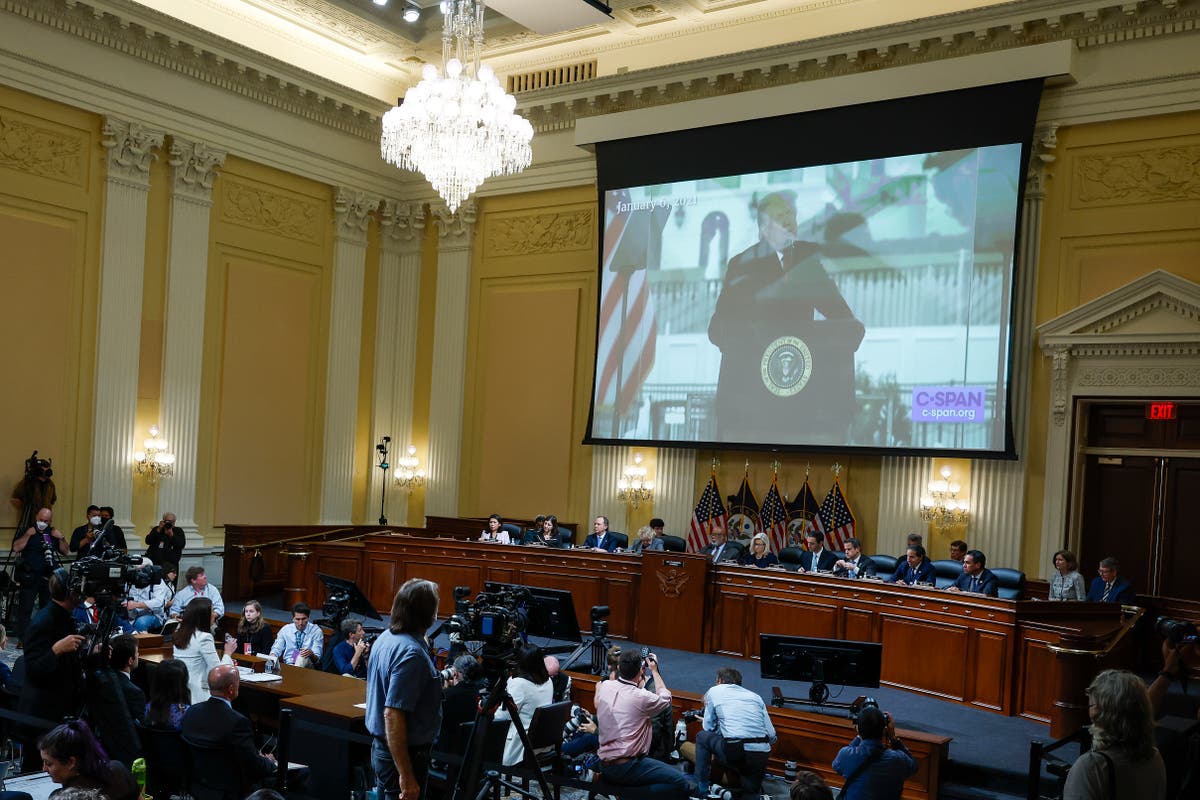 Donald Trump claims to “hardly know” an aide to his former chief of staff after her damning testimony to a House select committee investigating his baseless stolen election narrative and whether he knew a mob of supporters would commit violence at the US Capitol.

“I hardly know who this person […] is, other than I heard very negative things about her,” the former president wrote on his Truth Social account about Cassidy Hutchinson, an aide to chief of staff Mark Meadows who also served as a special assistant to Mr Trump.

Ms Hutchinson testified on 28 June that then-president Trump was aware his supporters were armed with guns and knives before they marched on the Capitol and that he ordered staff to remove security devices.

“I don’t f***ing care that they have weapons. They’re not here to hurt me,” he allegedly said. “Take the f***ing mags away. Let my people in. They can march to the Capitol from here. Let the people in.

“Take the f***ing mags away,” said Mr Trump, according to Ms Hutchinson, referring to the metal detectors around the Elipse.

In a series of posts raging at Ms Hutchinson and the committee after shocking testimony revealed Mr Trump’s alleged indifference to violence and commitment to false “stolen election” claims, Mr Trump called her a “total phony”, a “third-rate social climber”, a “bull…. artist” and “bad news.”

Mr Trump, who repeatedly said he “hardly” knew Ms Hutchinson, also claims to have “personally” turned down her request to join staff for his office in Florida after he left the White House.

“Why did she want to go with us if she felt we were so terrible?” he wrote in reaction to her testimony. “I understand that she was very upset and angry that I didn’t want her to go, or be a member of the team. She is bad news!”

In another post, the former president claimed that he “never complained about the crowd, it was massive.”

“I didn’t want or request that we make room for people with guns to watch my speech,” he wrote. “Who would ever want that? Not me!”

He falsely claimed there were no guns “found or brought” into the Capitol.

Among the dozens of people charged in connection with the attack, several allegedly carried not only firearms but also knives, bats and other makeshift weapons, according to the US Department of Justice. Several have been charged with carrying firearms on the Capitol grounds or stashing them nearby.

Approximately 255 people have been charged with assaulting, resisting or impeding officers or employees, including roughly 90 people charged with using a deadly or dangerous weapon or causing serious bodily injury to an officer, according to the Justice Department.

“So where were all of these guns? But sadly, a gun was used on Ashli Babbitt, with no price to pay against the person who used it!” added Mr Trump, pointing to a Capitol officer’s killing of a far-right conspiracy theorist who was among a mob at the door to the House chambers. The officer fatally shot her as she appeared to climb through a broken window into the chamber.

Ms Hutchinson also testified that Mr Trump threw a meal against the wall after discovering then-US Attorney General Bill Barr told The Associated Press that the 2020 presidential election was not marred by fraud.

“There was ketchup dripping down the wall” where Mr Trump’s food had impacted the side of the dining room, Ms Hutchinson testified.

In another post on Truth, Mr Trump denied throwing food.

She also claimed that Mr Trump tried to grab the wheel of a presidential state car (known as the “beast”). Mr Trump said her testimony is “sick” and “fraudulent.”

“Wouldn’t even have been possible to do such a ridiculous thing,” according to Mr Trump.

The House committee’s hearing on 28 June – which was abruptly announced late on Monday – sought to illustrate how physically close Ms Hutchinson was to the administration’s response to the attack on 6 January, and as her office was within close range of the Oval Office in a well-trafficked part of the White House.