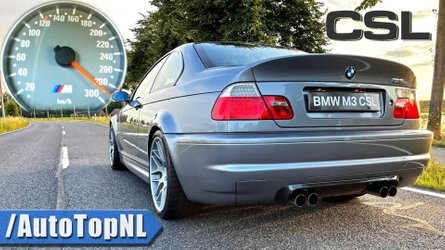 BMW is currently working on a new CSL-badged performance car that should debut later this year with a manual gearbox and a heavily modified 3.0-liter inline-six turbocharged engine. Its ideological predecessor, the M3 CSL from the E46 generation, however, was sold exclusively with a six-speed automated transmission with revised software compared to the regular M3 for faster gear changes.

The M3 Coupe Sport Leichtbau (meaning Coupe Sport Lightweight) was launched in 2003 as a limited edition M3 with more power, lower weight, and hardware modifications compared to the M3 E46. Just 1,383 cars were produced, all of them in either Silver Grey Metallic or Black Sapphire Metallic exterior color.

Thanks to the use of glass-reinforced plastics in various structural points of the car, carbon fiber reinforced plastic in the roof, carbon fiber body panels, and thinner glass for the rear window, the M3 CSL was about 243 pounds (110 kilograms) lighter than the standard M3. Power was provided by a 3.2-liter straight-six naturally aspirated engine, delivering 355 horsepower (265 kilowatts) and 273 pound-feet (370 Newton-meters) of torque.

But how fast a BMW M3 CSL from 2004 actually is? A new video from the AutoTopNL channel takes us to the German highway where the performance coupe unleashes its full potential on an unrestricted section of the Autobahn. Even the often criticized automated transmission is not able to ruin the fun behind the wheel and the car manages to hit a GPS-verified top speed of 171 miles per hour (275 kilometers per hour). The car’s speedometer shows even a higher velocity, though the 180 mph (290 kph) figure is not accurate.

With its numerous factory upgrades over a standard M3, including stiffer springs, upgraded shock absorbers, and a quicker ratio for the steering rack, the M3 CLS remains one of the most desirable performance cars from Munich for BMW enthusiasts and collectors. A well-maintained M3 CSL with full service history could cost more than $90,000 if you are able to find one for sale.

Current Nissan Maxima To Be Phased Out In Mid-2023, Appears Primed For An Electrifying Return

Some Hyundai, Kia Models Can Be Stolen With A USB Cable

Current Nissan Maxima To Be Phased Out In Mid-2023, Appears Primed For An Electrifying Return

Some Hyundai, Kia Models Can Be Stolen With A USB Cable