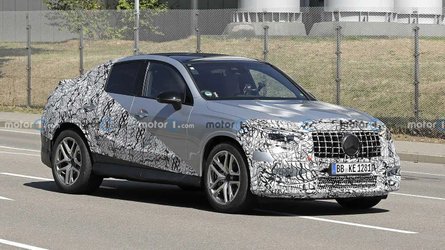 Not long after Mercedes revealed the all-new GLC crossover, we got our first glimpse of the GLC Coupe. The new GLC-Class will continue offering the fastback-like variant in a variety of flavors, just like the previous-generation model. Two new batches of spy shots capture the regular GLC Coupe and the hotter AMG GLC 63 Coupe variant, which we see for the first time.

The Mercedes-AMG GLC 63 Coupe wears camouflage on the front fascia and a sizable portion of the rear, just like the non-AMG GLC Coupe our spies also photographed. It’s easy to differentiate the two because the AMG version has the performance brand’s quad exhaust tips sticking out the rear fascia.

Up front, the AMG sports the Panamericana grille and appears to have a more aggressive front bumper. The camouflage conceals the styling. It also looks like the AMG GLC 63 Coupe rides a bit lower than the regular Coupe, wearing a sportier wheel design that hides massive brakes.

We know Mercedes will install an electrified four-cylinder in the new AMG, but we don’t know the powertrain’s output. The setup could produce as much as 645 horsepower, with the engine making 670 hp (500 kW) in the AMG C63, but Mercedes could cap it at around 600 hp (447 kW). The four-cylinder engine is expected to deliver over 400 hp (294 kW) on its own. It’ll share its powertrain with the regular AMG GLC 63.

We also have spy shots of the regular GLC Coupe, but it doesn’t differ from the test vehicle we spotted earlier this year. It’s wearing the same camouflage wrap, but the bulk of the changes are at the rear with the redesigned greenhouse. These shots also get a peek at the Coupe’s interior, and it’s not any different from the regular GLC that Mercedes launched in June.

Mercedes should reveal the GLC Coupe later this year, with the model going on sale for the 2023 model year. However, it’s unclear whether the automaker will launch the entire GLC Coupe lineup once or meter it across several debuts. Mercedes still has to introduce the regular AMG GLC, and anything can happen.