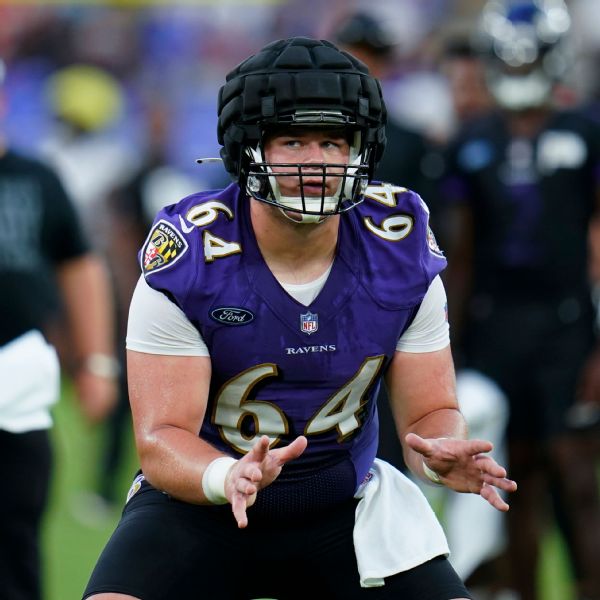 Linderbaum, the No. 25 overall pick in this year’s draft, went down during a team drill early in Thursday’s practice and did not return. The rookie center underwent X-rays and an MRI.

“It’s not a serious thing,” Ravens coach John Harbaugh said after Friday’s practice. “It’s going to be probably at least a week, just let it settle down. It could be two weeks. We’ll see. Of course, he’ll tell me otherwise. It’s not going to be all through training camp, unless something changes.”

Harbaugh has reduced the number of contact drills this year to lessen the risk of injury. Baltimore placed a total of 25 players on injured reserve at some point last season.

Patrick Mekari, who started 12 games at right tackle last season, will fill in for Linderbaum.

The first center ever selected in the first round by the Ravens, Linderbaum is expected to play a big role in protecting quarterback Lamar Jackson, who was sacked a career-worst 38 times last season. The challenge is making sure Linderbaum is in sync with Jackson on their snaps in the pistol formation, which has been a problem recently. Over the past five years, Baltimore had 13 aborted snaps, the fourth most in the NFL.

“I feel like he’s caught on really fast,” Ravens offensive tackle Ja’Wuan James said. “To be a center, especially in this offense … This offense has a lot of verbiage, a lot of plays, a lot of volume. I feel like he took it on pretty well.”

The Ravens selected Linderbaum in the first round with the pick they acquired from the Arizona Cardinals for trading away wide receiver Marquise “Hollywood” Brown.

Cowboys named most valuable team at $7.64B

8 overvalued and undervalued fantasy football players based on 2022 ADP

Vikings hope TE Smith (thumb) is back for Week 1

Cowboys named most valuable team at $7.64B

8 overvalued and undervalued fantasy football players based on 2022 ADP

Vikings hope TE Smith (thumb) is back for Week 1