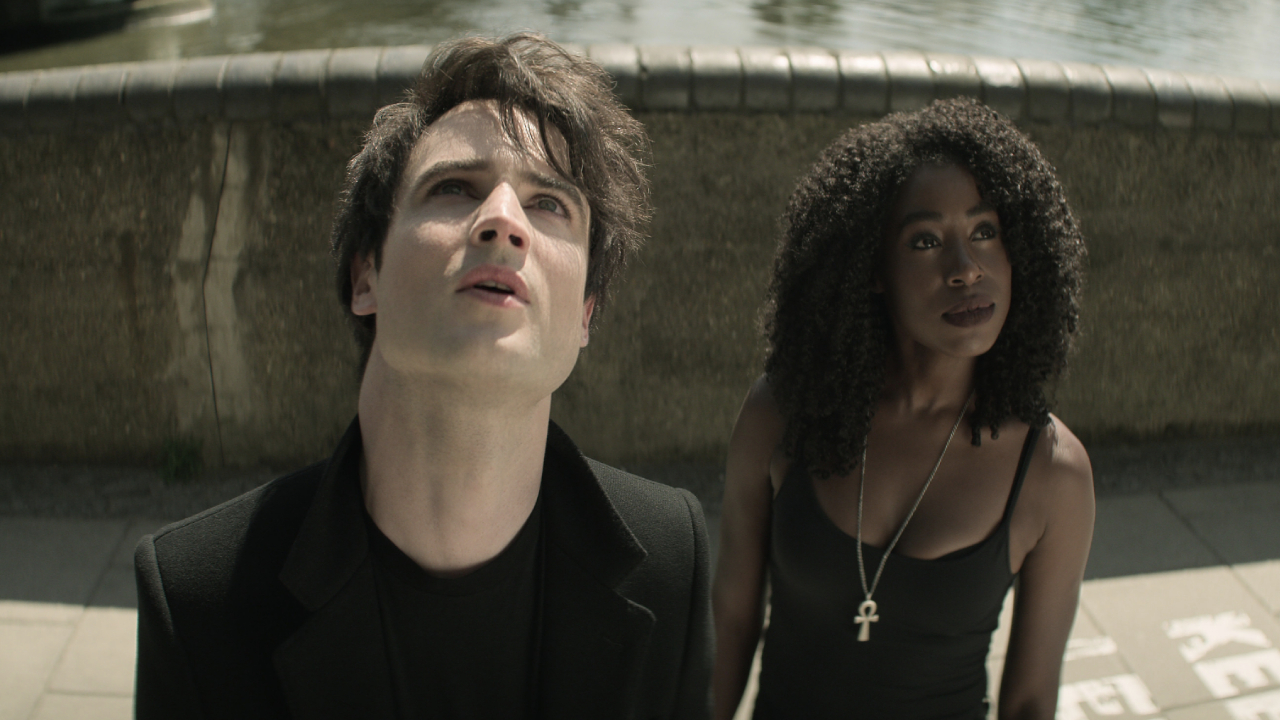 It almost feels just as surreal as Neil Gaiman’s own seminal writing style to say that Netflix’s series adaptation of his popular comic, The Sandman is finally here after the story spent many, many years waiting for a screen adaptation. The titular “master of dreams” from one of the most fervently anticipated new DC TV shows is easily the biggest role to date for actor Tom Sturridge, whose previous work might be unfamiliar to some fans. If you are such a fan, allow us to clue you in to where else you might know him from, along with the rest of the Sandman cast.

Playing Dream — the lead “hero” of The Sandman — is Tom Sturridge’s second Netflix gig after appearing in 2019’s strange mystery thriller Velvet Buzzsaw, which was a bit of a departure from his many Victorian dramas and period pieces, such as his first movie: 2004’s Vanity Fair. The British actor made his screen acting debut in a 1996 miniseries adaptation of Gulliver’s Travels and more recently starred on the Starz drama, Sweetbitter, with Ella Purnell and in HBO Max’s Irma Vep miniseries with Alicia Virkander.

As Dream’s trusted, winged companion, Matthew the Raven, we have Patton Oswalt, who first broke out on the King of Queens and is also known for various voice acting credits — such as Remy in Pixar’s Oscar-winning Ratatouille. This is also far from the Emmy-winning comedian’s first time voicing a comic book character, having played the title role of Hulu’s M.O.D.O.K., making his MCU debut as Pip the Troll in the Eternals end-credit scene, and personifying The Deep’s gills on The Boys to name just a few of many, many examples.

Also no stranger to comic book adaptations is Logan star Boyd Holbrook as The Sandman’s main villain: a literal living nightmare known as The Corinthian. Outside of playing a shady U.S. Embassy employee in Netflix’s Beckett cast, the actor has played a few heroes — such as on fellow Netflix original Narcos, in sci-fi crime drama In the Shadow of the Moon, and in Robert Rodriguez’s We Can Be Heroes, as well as in the 2018 fourth installment of the Predator movies and the recent, acclaimed horror movie The Cursed.

Also a comic book movie veteran (specifically of the DC movies variety) playing another threatening Sandman character named John Dee is Wonder Woman and RED 2 star David Thewlis, who’s better known literary fantasy character (out of the many other examples to choose from) is Remus Lupin from the Harry Potter movies. The versatile performer (he has done everything from irreverent comedies like The Big Lebowski to period epics like Ridley Scott’s Kingdom of Heaven) previously worked with Netflix for his reunion with Anomalisa creator Charlie Kaufman on I’m Thinking of Ending Things, as well as the animated comedy, Big Mouth, and its spin-off, Human Resources.

As the ruler of Hell, Lucifer, we have Gwendoline Christie — which seems like an inspired choice considering her great performance as Captain Phasma in the Star Wars movies, although this devil is not inherently evil and even something of a charmer. The British actor’s other literary adaptations include HBO’s Game of Thrones as Brienne of Tarth, The Hunger Games: Mockingjay — Part 2 as Commander Lyme and The Personal History of David Copperfield as Jane Murdstone, most recently.

Instead of Dream, Roderick Burgess initially intended to trap his sister, Death — portrayed in The Sandman by Kirby Howell-Baptiste, who is known for her recurring role on a show all about death called The Good Place, as well as other morbidly funny titles like HBO’s Barry, Killing Eve on AMC, and the holiday horror comedy, Silent Night. The English Cruella cast member’s previous collaborations with Netflix include Paul Rust’s romantic dramedy, Love, and the animated series, Jurassic World: Camp Cretaceous.

As the adventurous Johanna Constantine (an ancestor of detective/sorcerer John Constantine), we have Jenna Coleman, who made her feature film debut in a comic book adaptation: 2011’s Captain America: The First Avenger, as Bucky Barnes’ Stark Expo date, Connie. In addition to playing Clara Oswald on Doctor Who or appearing in the modern-day romance, Me Before You, in 2016, Victorian period dramas — such as PBS’s Victoria, in which she plays the royal title role — are typically the British actor’s bread and butter.

A librarian in charge of guarding Dream’s realm named Lucienne is played by Vivienne Acheampong, who already has a few notable fantasy titles under her belt — such as an episode of British sci-fi comedy, The Aliens, a 2018 edition of the World of Warcraft video games, and Robert Zemeckis’ remake of The Witches for HBO Max. She also debuted in the 2015 horror comedy movie, The Trap, starred on British sketch comedy series Famalam, and her last Netflix original series was the 2021 UK import, The One.

As the physical embodiment of Desire and another one of Dream’s siblings, we have Mason Alexander Park, who is already a very accomplished name in the world of theater after playing the title role in Hedwig and the Angry Inch and their award-winning performance in a 2019 production of Cabaret. Following their breakout screen acting role on Netflix’s live-action Cowboy Bebop series and lending their voice Amazon Prime’s The Legend of Vox Machina, Park can also be seen on NBC’s Quantum Leap revival in 2022.

As Desire’s very different twin, Despair, we have Donna Preston, who has the interesting reputation of appearing briefly in numerous action comedies — namely, and most notably, The Brothers Grimsby and The Hitman’s Bodyguard. The British writer and comedian also has a starring role on Netflix’s UK-based sitcom, Hard Cell, and can say she is a part of the Wizarding World following an uncredited role as a circus performer in Fantastic Beasts: The Crimes of Grindelwald.

As Biblical figure and world’s first murderer, Cain — who now loyally resides in the dream realm — we have Sanjeev Bhaskar, whose last time starring in a Neil Gaiman adaptation was on an episode Amazon Prime’s Good Omens in 2019. The British actor’s best-known film credits include playing Hamish Patel’s father in 2019’s Yesterday, as well as brief roles in the romantic comedy classic Notting Hill, the Simon Pegg-led fantasy comedy Absolutely Anything, and the universally beloved family film, Paddington 2.

As Biblical figure and world’s first murder victim, Abel — also a loyal dream realm resident — we have Asim Chaudhry, who actually has a few credits in common with his onscreen brother, Sanjeev Bhaskar, including the first Paddington movie and the comedic Peacock exclusive crime series, Hitmen. The UK actor’s first comic book adaptation was Wonder Woman 1984, after previously working on the Netflix interactive movie, Black Mirror: Bandersnatch, in 2019.

As Rose Walker — a young woman who discovers she has a mysterious connection to Dream while searching for her missing brother — we have Vanesu Samunyai. Sometimes also known by her Korean name, Kyo Ra, the English-born actor of Zimbabwean descent is making her debut in Netflix’s The Sandman cast.

Playing Rose’s friend Lyta Hall, who is also mourning the death of her husband, is Razane Jammal, who last starred on a supernatural, Netflix-exclusive drama called Paranormal in 2020. The British-Lebanese actor and model also previously starred alongside Boyd Holbrook in A Walk Among the Tombstones in 2014 and, the previous year, worked with legendary horror director Tobe Hooper on the film Djinn.

Rose Walker’s protector, Gilbert, is played by Stephen Fry, whose last DC adaptation was 2005’s V for Vendetta, which was one of his many notable literary adaptations — such as The Hobbit movies, Disney’s Alice Through the Looking Glass, and 2011’s Sherlock Holmes: A Game of Shadows as the titular detective’s brother, Mycroft. The British comedy legend (once part of a duo with Hugh Laurie) is also known for classic movies like A Fish Called Wanda, hilarious British comedy series like Blackadder from star and co-creator Rowan Atkinson, and last worked with Netflix on the hit coming-of-age romance, Heartstopper.

As Unity Kincaid, Rose’s benefactor awakened after a century-long slumber, we have Sandra James-Young, who made her acting debut in the romantic 1994 crime thriller, Captives, alongside Tim Roth and Julia Ormond before leading an impressive career on TV. Some of her notable small screen credits include long-running British soap operas like Coronation Street, Doctors, and EastEnders, as well as another series based on a popular literary fantasy called His Dark Materials, on HBO.

As Ethel Cripps, the lover of Roderick Burgess and mother of John Dee, we have Joely Richardson — a celebrated British actor who’s making her comic book adaptation debut with The Sandman, which is surprising considering her multi-faceted repertoire. Most audiences might remember her best from 1996’s live-action 101 Dalmatians movie, Roland Emmerich’s epic period piece The Patriot, playing Julia McNamara in the Nip/Tuck cast, and the 2020 adaptation of H.P. Lovecraft’s Color Out of Space, with Nicolas Cage, to name a few.

Playing Ethel Cripps’ younger self is Niamh Walsh — another Neil Gaiman adaptation veteran, having played Greta Kleinschmidt on Good Omens and voiced Nuala on a podcast drama also based on The Sandman. The Australian actor’s other notable TV credits include the long-running British medical drama Holby City, the historical drama Jamestown, the Netflix exclusive sports miniseries The English Game, and the Peacock exclusive mystery thriller Smother.

I cannot remember the last time we saw a TV series ensemble this large. However, with this many characters involved, you can be sure there is never a dull moment to this iconic fantasy story. See how Netflix’s The Sandman cast pulls it off by streaming Season 1 now (opens in new tab).

NCIS Season 20 Is Kicking Off With A Big Crossover Event, And There Are First Look Pics

NCIS Season 20 Is Kicking Off With A Big Crossover Event, And There Are First Look Pics