3 Takeaways from Sweden’s 2-1 Win vs. Latvia

Head and Labuschagne ink in BBL deals for post-Test stint 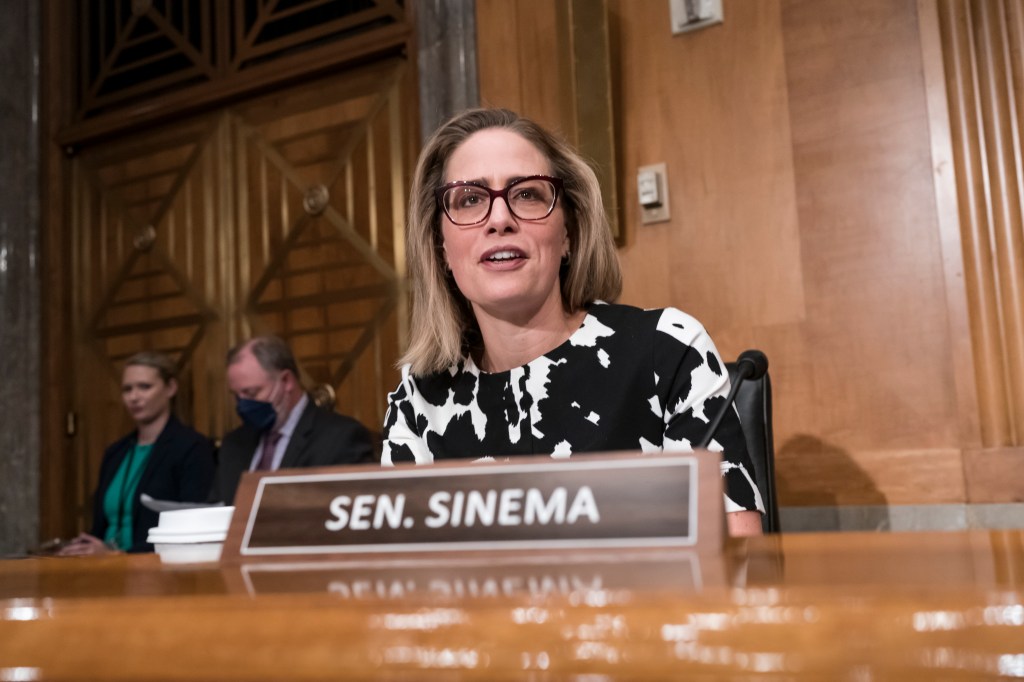 WASHINGTON — Democrats pared part of their proposed minimum tax on huge corporations and made other changes in their giant economic bill, Senate Majority Leader Chuck Schumer said Friday, as they drove toward delivering a campaign-season victory to President Joe Biden on his domestic agenda.

In an unusual peek at closed-door bargaining, Schumer, D-N.Y., said Democrats dropped a proposed tax boost on hedge fund executives after pivotal centrist Sen. Kyrsten Sinema, D-Ariz., said she would otherwise vote “no.” Schumer said that in its place, the measure now has a new tax — which others said will be 1% — on the shares companies buy back of their own stock, netting the government far more revenue.

“Sen. Sinema said she would not vote for the bill” or even vote to let debate begin unless private equity tax was removed from the legislation, Schumer told reporters. “So we had no choice.”

He spoke a day after he and Sinema announced compromise revisions to the environment, health care and tax package. With final numbers still to be calculated, the overall measure raises over $700 billion in revenue — including more robust IRS tax collections — using most of it for energy, climate and health initiatives and reducing federal deficits by $300 billion.

The accord puts Democrats on the verge of a more modest yet striking resurrection of many of Biden domestic aspirations that appeal strongly to party voters. Those include taxing big business, restraining prescription drug prices, slowing climate change, helping families afford private insurance and trimming federal deficits.

In another change, Schumer said a proposed 15% minimum tax on mammoth corporations had been trimmed and would now raise $258 billion over the coming decade, down from $313 billion. That provision, which has been the legislation’s biggest revenue raiser, will now let those companies depreciate their equipment costs more quickly, lowering the government’s tax take and helping manufacturers who buy expensive machinery. The new tax is expected to apply to around 150 companies with income exceeding $1 billion.

Democrats plan for the Senate to begin considering the bill Saturday, and the House will return next Friday for votes. The measure is sure to face unanimous Republican opposition in the 50-50 Senate, where the backing of Sinema and all other Democrats will be needed for passage, along with Vice President Kamala Harris’ tie-breaking vote.

“This bill is a game changer for working families and our economy,” Biden said at the White House.

Still other revisions are possible. But the package passed one hurdle when the Senate parliamentarian, Elizabeth MacDonough, said a provision could remain requiring union-scale wages be paid if energy efficiency projects are to qualify for tax credits.

She upheld another section limiting electric vehicle tax credits to those assembled in the U.S. and containing batteries with minerals from countries with whom the U.S. has free trade agreements.

Democrats were awaiting the parliamentarian’s decision on other issues including requirements that pharmaceutical makers pay penalties if they raise prices above inflation for drugs patients get from private insurers.

Democrats are using special rules that let them overcome GOP opposition and pass the package without needing the 60 votes most bills require. Under those procedures, the parliamentarian can force provisions to be dropped that break rules requiring them to be chiefly aimed at changing the federal budget, not making new policy.

Republicans say the measure will worsen inflation — a premier concern of voters — discourage companies from hiring workers and raise already high energy costs with its taxes.

“The pain at the pump is going to get worse, and it’s not just on the cost of energy to drive your car,” said Sen. John Barrasso of Wyoming, the Senate’s No. 3 GOP leader. “It’s also the energy to heat your home, energy that powers our country, energy for electricity.”

Nonpartisan analysts have said the legislation will have a modest impact on inflation and the economy.

“We’re feeling pretty good,” Schumer said about the legislation. “It’s what the country so desperately needs. And it’s what Democrats will deliver on in the coming days.”

The measure will also include $4 billion sought by Western senators to help their states cope with ruinous drought conditions, according to Sens. Mark Kelly, D-Ariz., Catherine Cortez Masto, D-Nev., and Michael Bennet, D-Colo. The group had sought $5 billion.

The bill faces a long weekend, including a “vote-a-rama” of unlimited, non-stop votes on amendments, which will mostly come from Republicans. Most are destined to lose, though the GOP hopes some will box Democrats into votes that would create campaign-ad fodder.

See also  Pets suspected of having monkeypox should be isolated, CDC says 

Taxing executives of private equity firms, such as hedge funds, has long been a goal of progressives. Under current law, those executives can pay significantly less than the top 37% individual tax rate on their income, which is called “carried interest.”

That measure was also a favorite of conservative Sen. Joe Manchin, D-W.Va., a long-time holdout against larger versions of Biden’s domestic plans who helped write the compromise legislation with Schumer.

But progressives also support taxing publicly traded companies that buy back their own stocks, a move that critics say artificially drives up stock prices and diverts money from investing. The buyback tax will net $74 billion over 10 years, much more than the $13 billion the “carried interest” plan would have raised.

Sign up for the Fortune Features email list so you don’t miss our biggest features, exclusive interviews, and investigations.