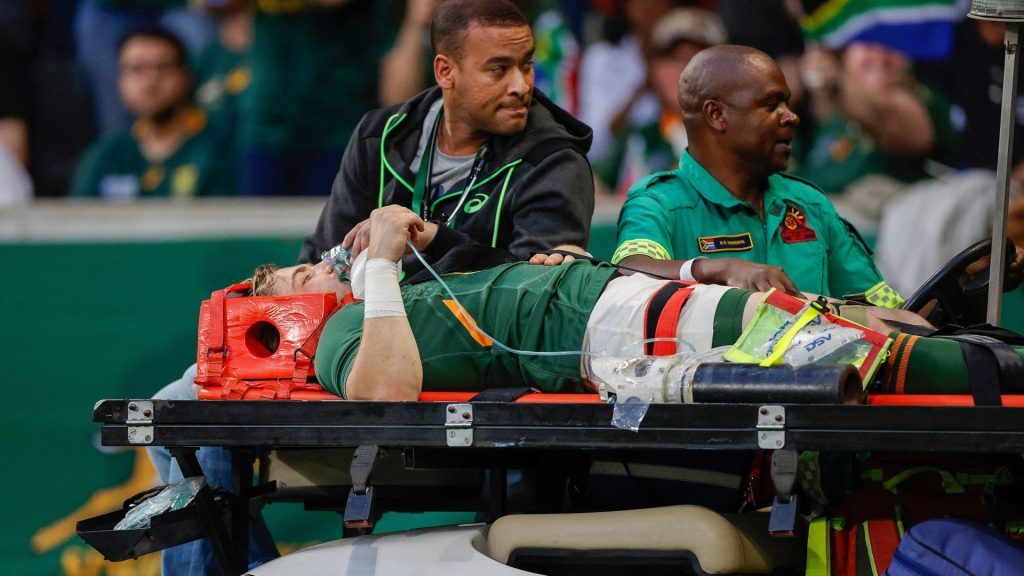 Seasoned Springboks scrum-half Faf de Klerk was knocked out just 34 seconds into Saturday’s Rugby Championship match at home to the All Blacks in Mbombela, the city where he was born. The 30-year-old was recalled to the starting line in one of three changes announced by head coach Jacques Nienaber last Tuesday.

However, de Klerk’s return in place of the benched Jaden Hendrikse didn’t last a single minute as his third involvement in the match left him stretched out on the pitch and requiring more than six minutes of treatment before being driven away on a motorised medical cart.

The scrum-half had his first touch when box-kicking clear from inside his 22 to Jordie Barrett on halfway after the All Blacks had kicked off. He then shot out of the line to catch prop Angus Ta’avao in possession but his energetic start unravelled when he folded around the corner to put in another tackle when New Zealand recycled the ruck ball and moved it towards the left-hand touchline.

With the ball finding Caleb Clarke, the winger who was playing his first Test for the All Blacks since November 2020, de Klerk scampered across to halt his opponent’s advance only to painfully get his tackle technically wrong, resulting in his head being on the wrong side when it crashed off the left knee of Clarke and left him stretched out on the pitch.

Referee Angus Gardner blew his whistle to leave the clock stopped on 43 seconds and allow the medics on to treat de Klerk and the stoppage was a lengthy one – in excess of six minutes – before the round one fixture restarted with Hendrikse on as a Springboks replacement.

The sub scrum-half was one of just two South African backs named as cover as Nienaber had gone with a six forwards/two backs split on the bench. Concern in the sold-out stadium over the condition of de Klerk was eased by the stadium PA system playing the Bob Marley classic, Everything’s Gonna Be Alright, while he was being tended to by the medics.

The early exit was the latest misfortune for de Klerk in recent times. He started last month’s series opener versus Wales but was omitted for the second game and played just 15 minutes of the series-ending third game.

Having exited for treatment against the All Blacks, de Klerk emerged to take up a seat amongst the Springboks bench 19 minutes into the game, his return to the sidelines generating huge cheers from the 42,367 spectators thrilled to see him back on his feet after the first-minute collision. The Springboks went on to win the match 26-10.