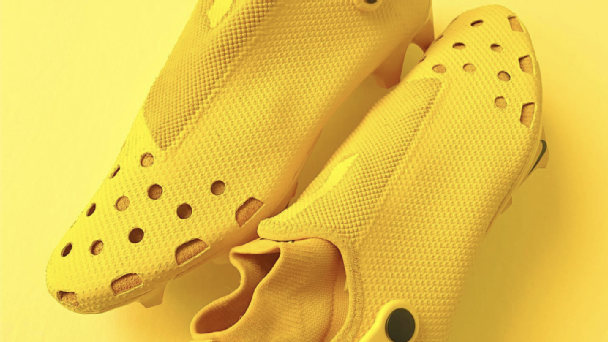 At least footwear artist Sean Vergara made them a thing for Arizona Cardinals cornerback Byron Murphy Jr. for training camp.

Vergara had mocked up a Crocs cleat weeks before Murphy reached out to talk about ideas for his annual custom footwear during camp. The two had worked together in the past, and when Murphy — a self-proclaimed “Crocs guy” — heard the idea, he was all in.

“Byron’s just one of those dudes that could swag anything out,” Vergara said. “Byron was the guy to pitch it to.”

From there, the 26-year-old Vergara, who lives in Seattle, got to work.

He took a pair of Murphy’s Nike cleats and started by dying the bottom yellow. Then he dyed the upper part of the cleat, which included the outer shell and the sock-like part where the foot goes in. The result was a school-bus yellow, which also happens to be similar to one of the Cardinals’ colors.

Then Vergara was meticulous with the details.

He wanted to put a Crocs strap on the back of the cleat to make it look as much like the shoe as possible, so he went to Dick’s Sporting Goods, took all the Crocs he could find off the wall and started measuring the straps. It was the strap on a toddler-sized pair of Crocs that fit the dimensions he needed.

But what is a pair of Crocs cleats without the holes on the toe box?

Vergara measured out the exact size of the holes of a real pair of Crocs and punched them on the cleats. He wasn’t done there. He copied the pattern of the holes on the actual Crocs on Murphy’s cleats to give them as authentic of a look as possible.

See also  Panthers: Sam Darnold’s fate is sealed, and he knows it

“They’re on fire,” Murphy said. “I posted them on my Instagram. They kinda blew up. I gotta get more colors though. That’s what I’m gonna do. I’m gonna get some more colors though because the yellow ones is kind of bright, so I don’t know if I can wear those on game day and not get fined.”

Murphy said he could play in them if he wanted.

The Crocs cleats, which took Vergara about 20 hours over the course of a week to make, went viral. He’s designed cleats for the last 10 years and said the Crocs cleats might just be his most unique ones.

“It’s hard to say because it’s a simple design, kind of drawing major inspiration from somewhere else, whereas other times I do small inspiration but, like, very, very unique design applications,” Vergara said.

“Anytime I get a chance to go beyond just painting, it’s always fun, and that’s always some of my favorite ones.”