‘As a halfback, it is pretty noticeable’: Aaron Smith on All Blacks’ breakdown issues

Sonic Origins on Switch has been updated to version 1.4.0 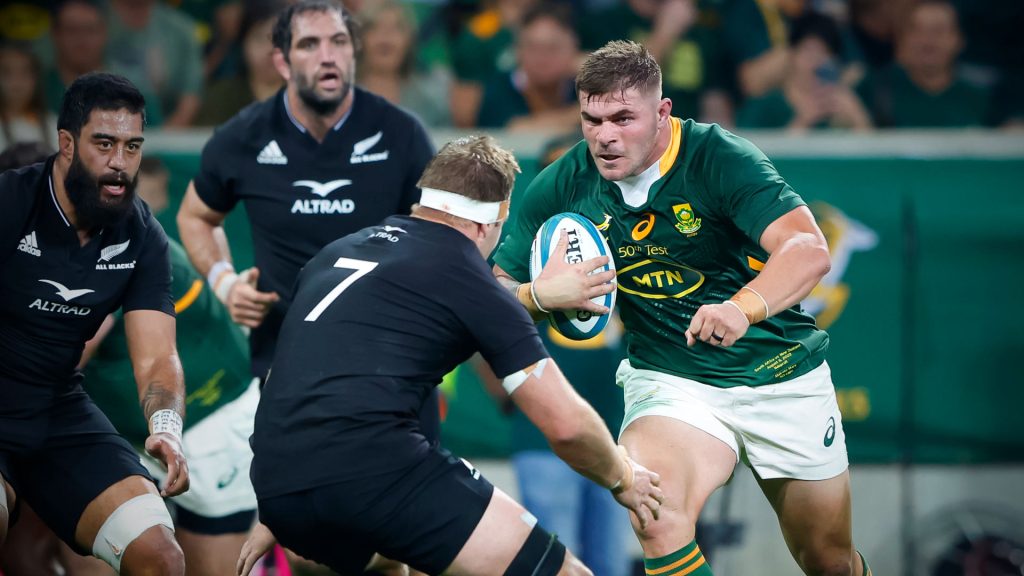 South Africa started their Rugby Championship campaign with a commanding 26-10 win over a hapless New Zealand in Nelspruit on Saturday.

Physically dominating the All Blacks from the outset, the Springboks slowly built a lead and the final margin is indeed an accurate reflection of the game.

The Boks showed some enterprise on attack, with more variation in their game.

However, it was their kicking game that really troubled the visitors at the Mbombela stadium.

15 Damian Willemse – 7
Showed great variation in his game – running the first couple of times and when All Black defence came up, looked for space behind them with the boot. He was also solid at the back, but got a bit too cheeky and earned a warning from referee for ‘pushing’ players.

14 Kurt-lee Arendse – 7
Showed his great aerial skills. Started with a brilliant kick-chase that resulted in the first try and continued to dominate in the air. Dealt very well with Caleb Clarke on defence, but spoilt it with a poor tackle in the air that resulted in a red card and being taken from the field on a mobile stretcher.

13 Lukhanyo Am – 7
Sublime off-load for the first try and made two really impressive runs. Won a couple of great penalty turnovers, making all but two of his tackles.

12 Damian de Allende – 6
Conceded a silly penalty for encroaching on the advantage line before the ball was out of the scrums, but carried manfully and made seven tackles.

See also  'Will only drive standards': Ealing sign an Aussie Super Rugby No9

11 Makazole Mapimpi – 6
Sublime kick and collect that won a penalty for SA and chasing hard all game, but missed a couple of tackles and conceded two turnovers.

10 Handre Pollard – 7
Missing touch with a penalty, but overall a much-improved performance that included a great goal-kicking display and a crucial drop-goal.

9 Francois De Klerk – NA
Shot out of the line twice in the opening 40 seconds, the second time his head making contact with the knee of Caleb Clarke – knocking him out cold and ending his match.

8 Jasper Wiese – 7
Plenty of impressive carries and solid on defence – making A MATCH-HIGH 14 tackles. hE gave away a silly breakdown penalty, but overall it was the kind of performance that could cement his spot in the Bok starting XV.

7 Pieter-Steph du Toit – 6
His impressive work rate off the ball and on defence, with a 90 percent tackle completion percentage.

6 Siya Kolisi – 8
Great breakdown work, attending rucks at a higher rate than usual. At times he played more like a blindside flank. His tackle count – with a 100 percent completion rate – also went into double figures.

5 Lood de Jager – 7
Worked very hard on defence and was a tower of strength in the set pieces. Did lose the ball in contact early in the second half, but a commendable performance.

4 Eben Etzebeth – 6
Quiet by his usual high standards – with very little reward for his eight carries and a couple of missed tackles. There was a great line-out steal.

3 Frans Malherbe – 5
Solid in the set pieces, but his work rate needs improving. Made only a handful of tackles and a couple of ineffective carries.

2 Malcolm Marx – 9
Had another powerful game to mark his 50th cap, even though it was not flawless – a deserved Man of the Match outing. His ball control may not always have been clinical enough at times and also failed to find his jumper early on. However, he made up for it by making all his tackles and winning five breakdown penalties.

Springboks bringing their physical dominance to the game, but still plenty of time for the All Blacks to get back into it ? pic.twitter.com/alUbdNkKLQ

1 Trevor Nyakane – 6
Started with a powerful scrum that won a penalty and won a couple more set-piece penalties. However, then conceded a scrum penalty later. Made six tackles and was subbed in the 39th minute after he clearly ran out of puff.

16 Mbongeni Mbonambi – 5
Some good endeavour, but missed as many tackles as he made. Not the way to win back a starting spot.

17 Steven Kitshoff – 7
Won a couple of turnovers in the second half, made eight tackles and stood solid in the set pieces.

18 Vincent Koch – 6
Looked to bring some energy in his stint, missing just one tackle and had a couple of determined carries.

19 Salmaan Moerat – NA
Not enough time to be rated.

20 Franco Mostert – 6
Working hard off the ball, getting into good defensive positions and working hard at the breakdown.

21 Kwagga Smith – 8
Very busy on defence, making some great cover tackles. Also a couple of impressive carries. A real impact off the bench.

See also  Australia's team of matchwinners will take some stopping

22 Jaden Hendrikse – 8
Varied his game well, asking different questions. His basics were rock solid and his kicks out of hand also from the top shelve.

23 Willie le Roux – NA
Sneaked onto the field in the last minute and his only action was to score the try that sealed the game by showing great anticipation. However, not enough time to be rated.

What we know on Deshaun Watson’s suspension – and could an NFL appeal be on horizon?

Karachi, Lahore to host T20Is as England return to Pakistan after 17 years

Capsey, Brunt and Jones have England on the brink of a place in the semi-finals of the Commonwealth Games

The important phone call Arendse will make before facing All Blacks

England to tour Pakistan after 17 years; here’s the full schedule of 7 T20Is

‘We’re anticipating a pretty hostile environment’: All Blacks heading into the cauldron

What we know on Deshaun Watson’s suspension – and could an NFL appeal be on horizon?

Karachi, Lahore to host T20Is as England return to Pakistan after 17 years

Capsey, Brunt and Jones have England on the brink of a place in the semi-finals of the Commonwealth Games

The important phone call Arendse will make before facing All Blacks

England to tour Pakistan after 17 years; here’s the full schedule of 7 T20Is