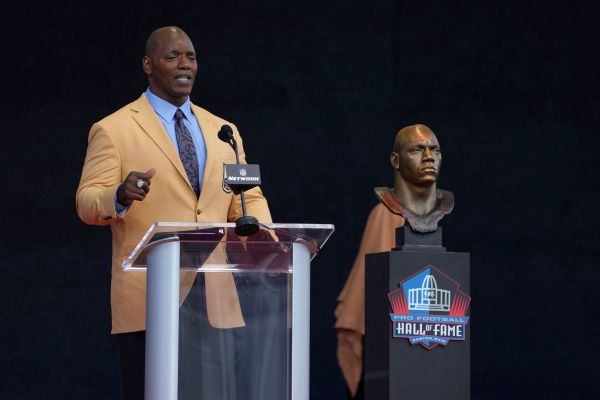 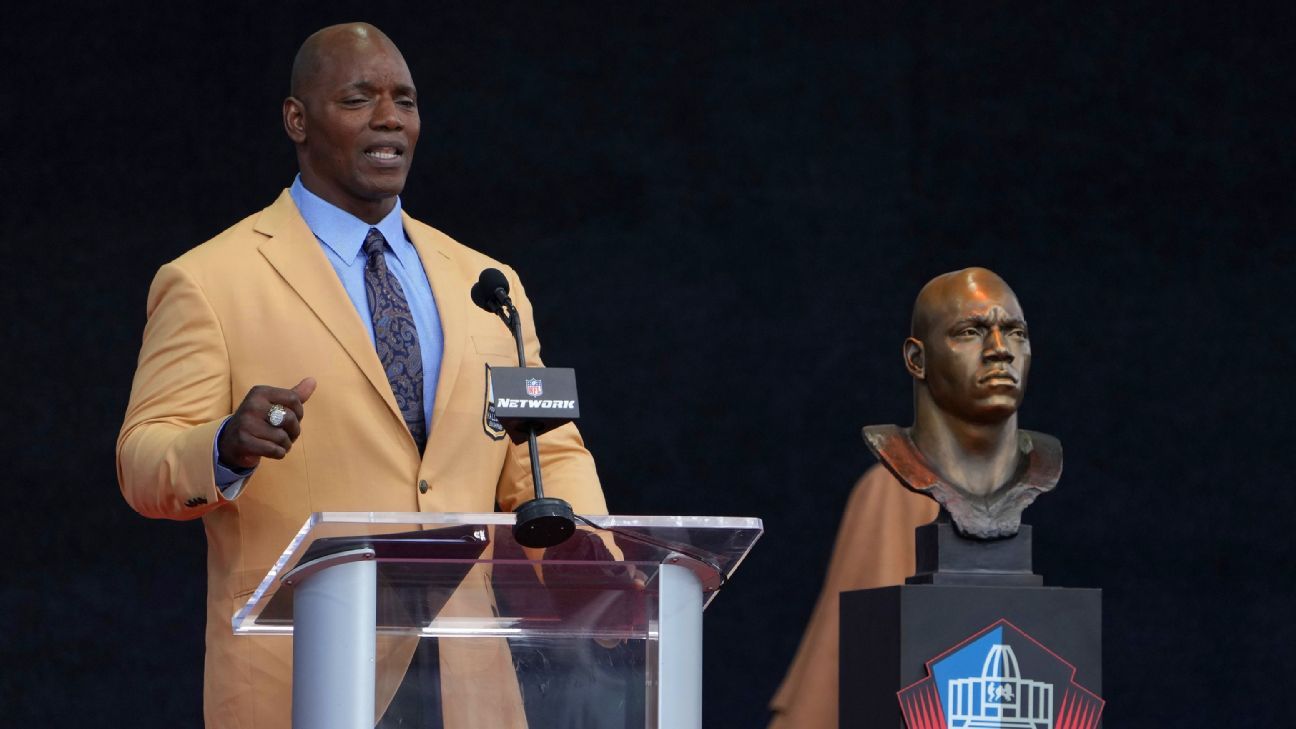 CANTON, Ohio — Being part of the Pro Football Hall of Fame’s class of 2022 holds a special — and painful — meaning for former San Francisco 49ers defensive lineman Bryant Young. It’s an emotional reminder of his son Colby, who died of cancer on Oct. 11, 2016. Colby’s favorite number, his dad said during his induction speech Saturday afternoon at Tom Benson Hall of Fame Stadium, was 22.

Young’s voice broke even more when he spoke about how bravely his son, diagnosed at age 13 in 2014, handled the news after being told in 2016 the cancer had spread and the treatments were no longer working.

It was a powerful moment that caused the crowd to give Young a standing ovation.

“Colby sensed where things were headed,” Young said. “He didn’t fear death as much as the process of dying. Would it be painful? Would he be remembered?

“Colby … you live on in our hearts. … We will always speak your name.”

Young was a four-time Pro Bowler, a two-time first-team All-Pro and a member of the NFL’s All-Decade team of the 1990s. He also was the 1999 NFL Comeback Player of the Year after leading the 49ers with 11 sacks to go along with 20 quarterback pressures in his return from a broken leg.

Boselli was a five-time Pro Bowler, a three-time All-Pro and a member of the NFL’s All-Decade Team of the 1990s before his career was cut short by a shoulder injury. He was the first pick in Jacksonville Jaguars history in 1995 (second overall) and is the first player in franchise history to be elected to the Hall of Fame.

He summed up that honor with the first four words he spoke: “Well, this is amazing.

“… As the first Jacksonville Jaguar to be welcomed as a member of the Pro Football Hall of Fame is a profound honor.”

Branch, who died Aug. 3, 2019, won three Super Bowls in his 14-year career with the Oakland/Los Angeles Raiders. He was a three-time first-team All-Pro and a four-time Pro Bowler. His sister, Elaine Anderson, spoke on his behalf and said she felt her brother was here in spirit along with two other Raiders Hall of Famers.

“Today is bittersweet because we miss our beloved Clifford and sweet because it is now history,” she said. “I want to tell you there’s a sweet spirit in this place today. Our Clifford, No. 21, would not miss his enshrining for nothing. He longed for this day and 21 is seated front and center with Al Davis and John Madden.”

Butler played 12 seasons in Green Bay, won a Super Bowl and was a four-time Pro Bowler and four-time All-Pro. A member of the NFL’s All-Decade Team of the 1990s, he also is credited with creating one of the most iconic touchdown celebrations in NFL history: the Lambeau Leap. He fought through foot problems as a child — they were in braces or casts and he at times was wheelchair bound — to go on to play more games than any defensive back in Green Bay history.

“When you play for the Green Bay Packers, a lot of doors open up,” Butler said. “You win a Super Bowl, all doors open up. When you make the Hall of Fame, football heaven opens up.”

McNally is the first official to be inducted into the Hall. He is regarded as the “Father of Instant Replay” after introducing the replay system in the NFL in 1985, and the league’s Manhattan command center is named after him.

“This is the greatest thing I need for an official: Do the job [and] hopefully nobody’s going to even know you were alive,” McNally said via video. “Makes the calls the proper way the way it should be: With a heavy dose of common sense.”

Mills started his professional football career in the USFL before signing with the New Orleans Saints in 1986. Despite being only 5-foot-9, Mills quickly established himself as one of the league’s best players, making five Pro Bowls and being named All-Pro three times. Mills died of intestinal cancer in 2005, two years after his diagnosis. His widow, Melanie Mills, said her husband’s motto of “Keep Pounding” — which was adopted by the Carolina Panthers after he signed as a free agent in 1995 — was something that he lived off the field, too.

“He was more than just a great football player,” Melanie Mills said. “He was a father, a friend and a husband, and a leader who always kept pounding not matter what the odds were.

“Keep pounding, everyone. That’s what Sam would want you to do.”

Seymour spent eight seasons with the New England Patriots and four with the Oakland Raiders. He made seven Pro Bowls and was voted to the All-Pro team three times. He won three Super Bowls and was a member of the NFL’s All-Decade Team of the 2000s.

See also  The future of NFL betting: Why player props are expected to be king

“I’m overwhelmed today with humility, not because of what this moment says about me, but what this moment says about we and what we can do together,” Seymour said. “I’m overwhelmed today with gratitude because I didn’t get here alone. None of us did. None of us could have, class of 2022. They say you can judge a man by the company he keeps. I couldn’t be among better company than you.

“It’s a privilege to have my name bound forever with yours in the Pro Football Hall of Fame.”

Vermeil, who led the Philadelphia Eagles to a Super Bowl and the St. Louis Rams to a Super Bowl title, was named the NFL’s Coach of the Year twice by The Sporting News and once by The Associated Press. The man known for wearing his emotions on his sleeve had the longest speech of the day. He talked for more than 20 minutes and thanked a long list of players, coaches, mentors, friends and family members.

“I just wish I had time to go through everyone,” he said.