Crysencio Summerville was the match-winner again for Leeds as they came from 3-1 down to beat Bournemouth 4-3 in a blockbuster Premier League match at Elland Road.

After his late winner against Liverpool at Anfield last week, Summerville raced beyond the Bournemouth defence after being slipped through by substitute Wilfried Gnonto and calmly slotted the ball beyond Mark Travers (84) to seal a memorable victory for Jesse Marsch’s side.

Earlier, ​​​​​​fellow substitute Sam Greenwood had made it 3-2 in the 60th minute and created Liam Cooper’s equaliser from a corner eight minutes later. 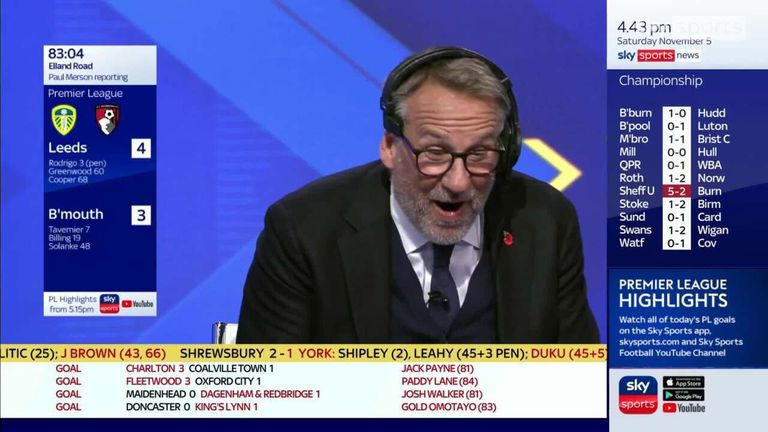 In a thrilling encounter in West Yorkshire, Rodrigo’s early penalty (3) was cancelled out by a Marcus Tavernier strike (7), before Philip Billing gave Bournemouth a 2-1 lead at half-time.

Dominic Solanke then scored his 50th league goal three minutes after the break (48) to put the visitors 3-1 up, but Leeds hit back in remarkable fashion to secure back-to-back Premier League wins. They rise to 12th. Bournemouth drop to 15th.

Player of the match: Sam Greenwood.

Leeds made a flying start and took the lead through Rodrigo’s third-minute penalty. Marcos Senesi sent Summerville tumbling in the penalty area inside the opening 60 seconds and Rodrigo converted his seventh league goal of the season from the spot.

Bournemouth equalised four minutes later in their first attack. Robin Koch could only head Billing’s cross onto the back post and the unmarked Tavernier side-footed a volley into the bottom corner.

Leeds head coach Jesse Marsch named an unchanged starting line-up after last week’s stunning win at Liverpool, although striker Patrick Bamford – a second-half substitute at Anfield – was left out of the squad due to injury.

Leeds goalkeeper Illan Meslier turned Jefferson Lerma’s header over the crossbar as Bournemouth swarmed into the ascendancy and they silenced Elland Road with a second goal in the 18th minute. Meslier blocked Tavernier’s effort, but the ball rebounded to the Bournemouth winger and he played it back to Billing, who smashed the visitors into a 2-1 lead from just inside the area.

Kieffer Moore spurned a gilt-edged chance to extend the Cherries’ lead when he shot tamely at Meslier from in front of goal, with Leeds all at sea again at the back after another swift counter-attack.

Bournemouth caught Leeds out in transition once more three minutes into the second half and doubled their lead. Tavernier was afforded too much space on the left and his low cross was turned home by Solanke to put the visitors 3-1 ahead.

Marsch sent on Greenwood for Marc Roca soon after and that paid dividends as the substitute curled home an excellent finish from 20 yards after Pascal Struijk’s shot had been blocked.

Rodrigo blazed a chance high and wide as Leeds swept forward in search of an equaliser before skipper Cooper raised the roof by heading home Greenwood’s 68th-minute corner.

Jack Stacey was a whisker away from firing Bournemouth back in front just moments after replacing Ryan Fredericks as a typically topsy-turvy game at Elland Road hung in the balance.

And it was Leeds who snatched the victory. Half-time substitute Gnonto drove at the heart of Bournemouth’s weary backline and slipped in Summerville, who raced on and buried his third goal of the season.

Leeds head to Wolves in the Carabao Cup third round on Wednesday November 9 with kick-off at 7.45pm before returning to Premier League action in their final game before the World Cup at Tottenham next Saturday November 12 at 3pm.

Bournemouth face a double-header at home against Everton next week. The pair meet at the Vitality Stadium in the Carabao Cup on Tuesday at 7.45pm and then play there again four days later in the Premier League with kick-off at 3pm.