Almiron scores again as Newcastle thrash Saints | Howe: We weren’t at our best Miguel Almiron scored again as Newcastle moved into third place in the Premier League with a comfortable 4-1 win over Southampton at St Mary’s.

Almiron’s composed finish in the 35th minute – his seventh goal in as many Premier League games – gave Newcastle the lead before substitute Chris Wood (58), Joe Willock (62) and Bruno Guimaraes (90+1) struck in the second half to ensure it was a comfortable afternoon on the south coast for Eddie Howe’s side.

The victory sees the Magpies climb above Tottenham, who lost to Liverpool later on Sunday, into third place in the table and extends their unbeaten run to nine matches.

Southampton scored a late consolation to make it 3-1 through Romain Perraud (89), but a sixth defeat in nine games leaves them in the relegation zone and piles more pressure on manager Ralph Hasenhuttl.

Player of the match: Miguel Almiron.

After an even start at St Mary’s, Newcastle grew into the game and went ahead 10 minutes before half-time when Paraguay international Almiron wove his way into the area, evaded a challenge from Ainsley Maitland-Niles and sidefooted past Gavin Bazunu into the bottom-left corner.

Southampton, who were forced into a first-half change when Juan Larios was replaced by the returning Romeo Lavia, should have levelled moments before the break when Stuart Armstrong’s cross found Mohamed Elyounoussi, but the Norwegian somehow skied his effort from six yards.

Armel Bella-Kotchap returned to Southampton’s line-up for the first time since dislocating his shoulder against West Ham last month.

Romeo Lavia was also a welcome return on the Saints bench, re-joining the squad after recovering from a hamstring injury.

Theo Walcott got his first start of the season, while there were also starts for Juan Larios and Ainsley Maitland-Niles as Ralph Hasenhuttl made four changes from last weekend’s loss at Crystal Palace.

Newcastle head coach Eddie Howe made just one change from the starting XI that beat Aston Villa last time out.

Jacob Murphy started in place of Joelinton, who was serving a one-match suspension after picking up five yellow cards. 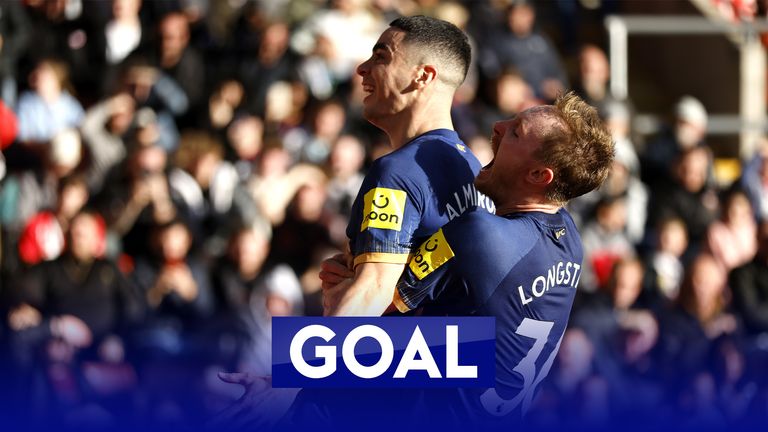 James Ward-Prowse directed an early free-kick after the restart straight at Nick Pope, while Elyounoussi’s second half began much like the first ended as he directed another shot over the crossbar.

The weather soon began to mimic the hosts’ afternoon as substitute Wood pounced on a pass, pivoted, and directed the ball into the bottom corner under the worsening deluge before Willock added to Newcastle’s advantage with a low strike to the same spot four minutes later. 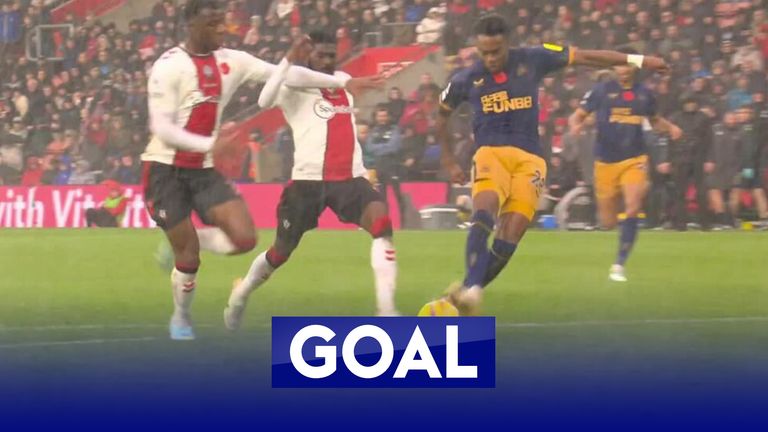 Joe Willock raced clear to make it 3-0 to Newcastle

Perraud denied the visitors a clean sheet, giving Pope no chance as he fired a composed strike into the top-right corner. But Southampton’s celebrations were cut short as Guimaraes responded immediately, curling Newcastle’s fourth past a diving Bazunu.

The high-flying Magpies have lost just once in the Premier League this season – a 2-1 defeat at Liverpool on August 31 – and are just five points behind champions Manchester City and seven adrift of leaders Arsenal.

Southampton have lost eight of their 14 league matches this season and are 18th in the table, one point and one position below local rivals Bournemouth. 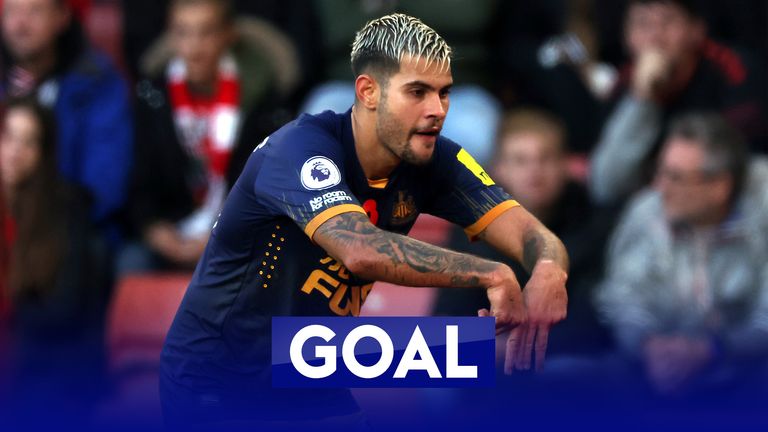 Bruno Guimaraes’ precise strike made it 4-1 to Newcastle

With England manager Gareth Southgate watching on as he prepares to name his World Cup squad on Thursday, he would have feared the worst when Kieran Trippier was substituted due to an apparent hamstring issue.

However, the Newcastle right-back allayed any fears after the match, telling Sky Sports: “I just felt it tighten up as I stretched. I came out in the second half to carry on, but the manager subbed me off.

Trippier was happy with the victory but disappointed with the way Newcastle played.

Asked about the club sitting in third place in the table, he said: “It sounds good, but we’re frustrated in the way we played.

“We played nowhere near our best, we all know that – the manager said that at half-time. But the most important thing is the win, and we move one step closer now.”

Howe: We were not at our best 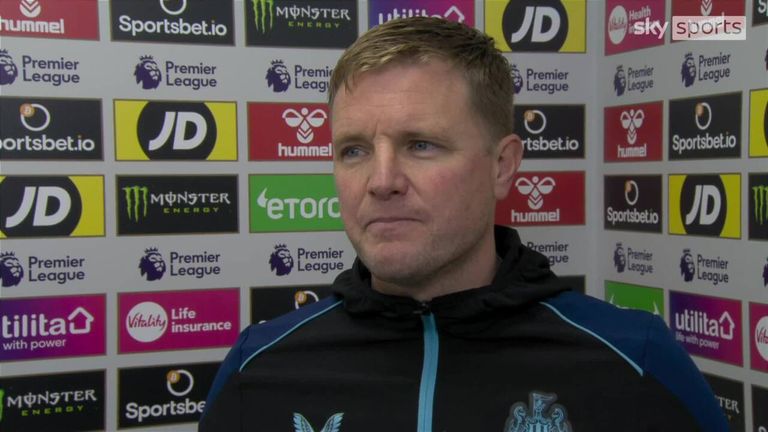 Newcastle head coach Eddie Howe told Sky Sports: “I’m very pleased with the result. The performance wasn’t our best, but I’m not going to pick it to pieces.

“It was a tough game for us. Southampton dropped into the bottom three on Saturday, so we knew they would show a reaction.

“We were not at our best but we scored four wonderful goals. It feels a little flat because we didn’t hit the heights which we have in other weeks, but we were clinical when we needed to be.”

On Almiron’s performance, Howe said: “I think that was one of Almiron’s best performances. He stood out for us. His running and energy were evident.

“His finish was clinical. I was really pleased with him again and it adds to the high number of quality goals he’s scored for us.” 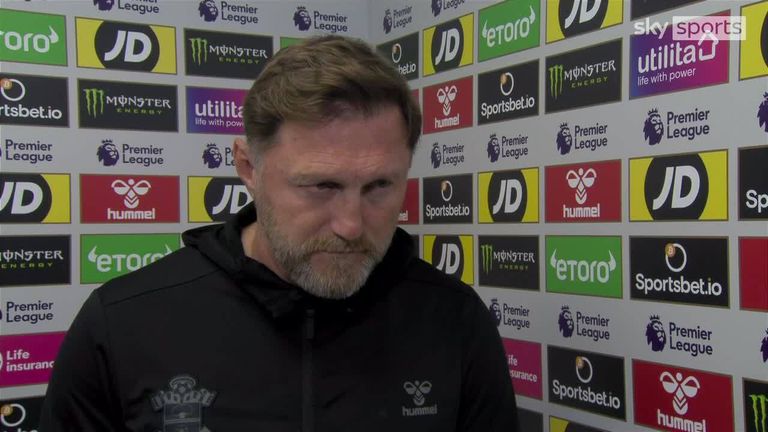 When asked in his post-match press conference if this was his final game in charge, Southampton manager Ralph Hasenhuttl said: “I have made a lot of decisions in my time here. Thankfully, I don’t have to make that decision.

“I cannot say the effort wasn’t there, but at the moment we are not taking the reward for the effort on the pitch.

“I think being in the relegation zone is a reflection of what we’ve done so far. It has not been good enough.”

He told Sky Sports: “Newcastle are playing with their tail up, deserved to win, not a problem.

“Southampton are a team that are fighting for their lives. Unless they improve on being more aggressive and willing to take one for the cause, they’re going down.”

Southampton welcome Sheffield Wednesday to St Mary’s in the Carabao Cup on Wednesday at 7.45pm. They then travel to Liverpool for their final match before the World Cup break on November 12 at 3pm.

Newcastle complete their pre-World Cup campaign with two home games. The Magpies host Crystal Palace in the Carabao Cup on Wednesday at 7.45pm, before being visited by Chelsea on November 12 at 5.30pm – live on Sky Sports.